After visiting the main floor of the Berrocal Foundation, we were taken down to the lower level.  Here the molds, unfinished pieces, inventory of finished pieces, large artworks and other items were stored.  As we made our way there, the excitement was mounting.  The room was dark and only lit by the glow of our cell phones.  Carlos turned on one small light and we were off.

George asked permission to film, more lights were turned on and off he ran.  While my beautiful lover filmed, I walked around corners and took photos and listened to Carlos describe what I was looking at.  There were boxes upon boxes of pieces of the cofinetta that were in various stages of completion.  I can’t tell you how many pieces were here.  It is an amazing amount of raw material.  We spent a great deal of time discussing sunk costs and bringing the rest to market.  Wow is all I have to say. 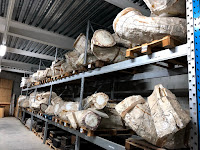 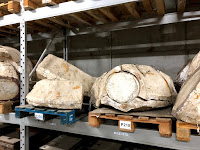 As I turned a corner, I saw the original molds along with the Styrofoam mockups for the statue in Jardines Picasso.  I saw the fountain I wanted to visit in Málaga.  I saw plastic wrapped art that pained me to see closed up and hidden from the world.  It was all I could do to not grab a blade and start ripping off the shipping wrap. 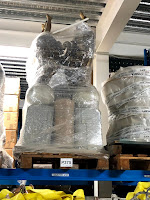 I began looking at the molds and the first one I came to was for the Paloma Box.  Not only was the mold there, but there were also unfinished pieces.  What a find!  I hunted for years to get my Paloma Box and here they had many unfinished in this basement.  It’s a shame that they are sitting like this, but after talking with the brothers, I can understand why and what they are trying to do.  It makes my pieces all the more special. 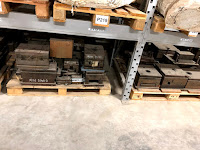 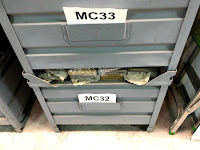 After wandering around in the bowels of the building for an hour we went upstairs to the office space.  Here we saw the cabinet that the famous photo is on and the office workroom.  In the middle was a long table with books and papers laid out on it.  To me it looked like a memorial to Berrocal.   I would have loved to pick up some of the papers and read them, but it wasn’t my place.  We learned that at any given time he had three or four projects going on.  The last of which was his memoirs and a collection of the final pieces he produced before he died. An Anthologica part 2 if you will.  We turned around and were confronted by a massive bookcase filled with all genres of material. In the middle of the books was a case filled with many of the multiples.  I was surprised to see that Maria de O was missing. In it’s place was a photograph of the work.  As I scanned the shelves, I stopped and lusted after four pieces in particular.  I’ve always said I wanted these and one day I shall find them.  La Menina II, Hoplita, Sixtiasis, and Maria Manuela. 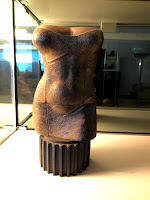 I’ve a line on Hoplita and should have it by the end of November all things going right.  I was surprised by the size of it. I expected a much bigger puzzle.  He also showed us a wine bucket and tapas plate version of Benjamin. What I wouldn’t give to get my hands on that piece. 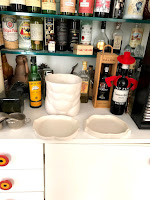 From here, we said our goodbyes and agreed to meet on Sunday at noon.  George and I went back to our hacienda for a lovely local dinner and to mull over all we had seen today.