I will first start with the night before. After the banquet we had the twisty puzzles party. Most of us stayed in the lobby until around one 130. Photos follow. 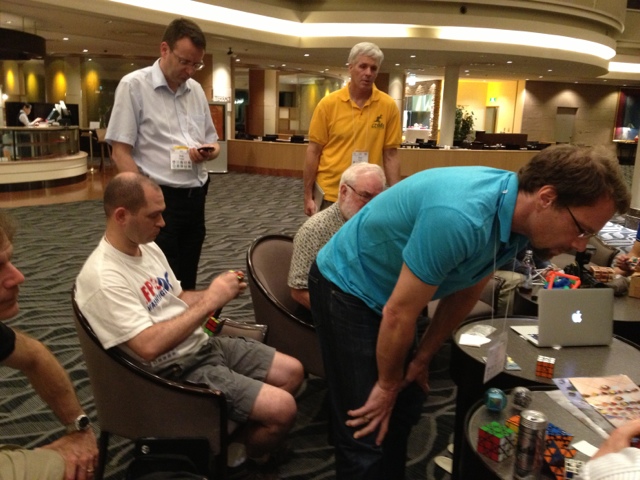 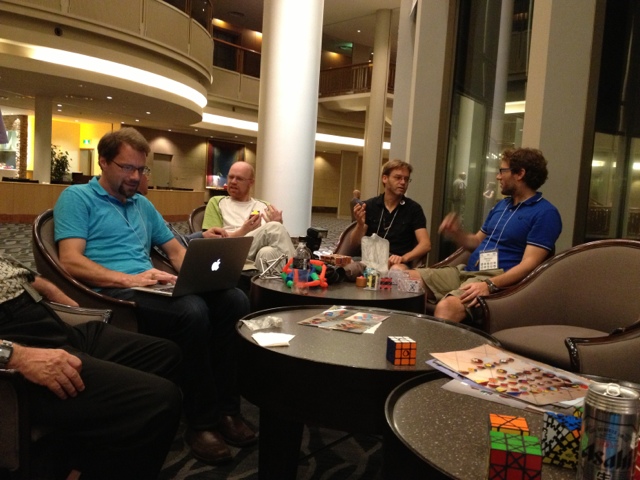 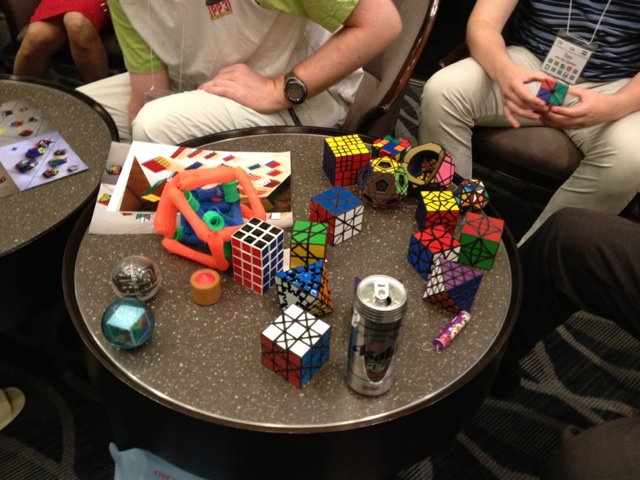 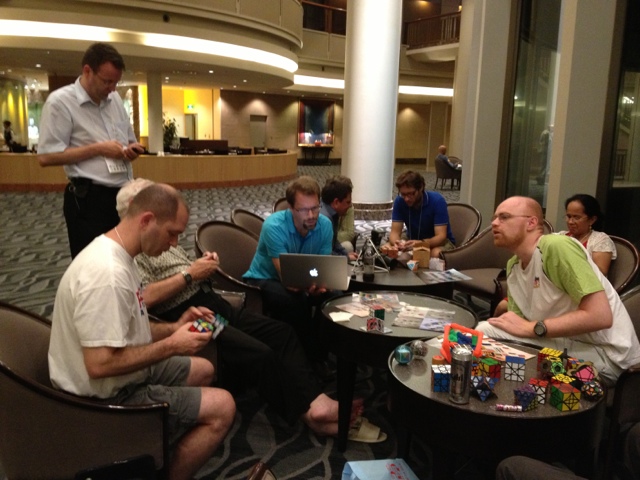 I love the exchange it's great to be able to come home with 65 New puzzles. But the day that really tickles my fancy is the puzzle party.  It's one massive room full of people selling nothing but puzzles. 9-3 with nothing to do but buy toys. It's a great joy every time.

This year I had a table with Dave again. And we had the bug to wait it out for us as well. Dave and ii took it in turns to shop and run. That's really the best way to go it.
My first purchase of the day was a $20 origami book for the bug. From there it was a massive purchase of hanayama puzzles for the guys across the border.  I Box a whole bunch of talking tile puzzles the slim ones some for the guys some for myself.  A puzzle or two from Hendrick. And really that was about all oh I did get Wil's Coke bottle.
I spent more time selling puzzles that I did find puzzles. But that's a good thing. Because tomorrow I'm going to Torito to buy more. I got rid of most of what I brought over to sell. And I gifted away a few others.
Next up the lecture on Hanayama puzzles. Tonight is the awards banquet that should be good fun it usually is.
Have I mentioned that I'm exhausted. I've been running on empty. I think tonight I'll be puzzling in the lobby as usual. And I know I will sleep on the plane on the way home. 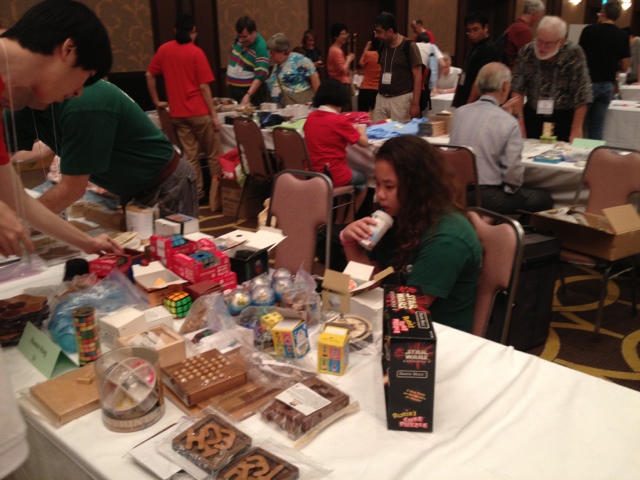 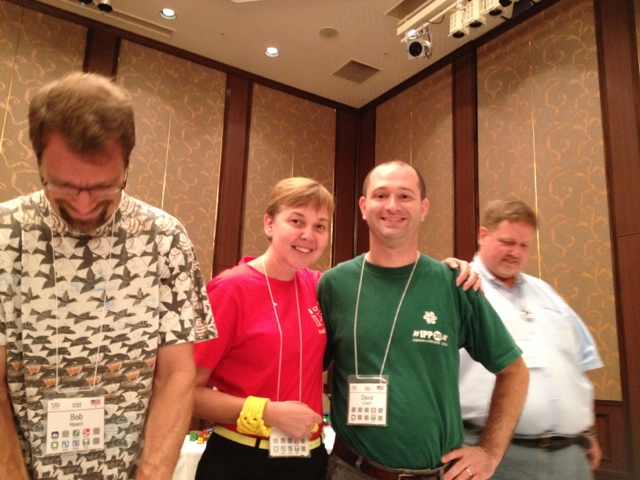 Photos first because I'm on my phone. Stay with me and read at the end. 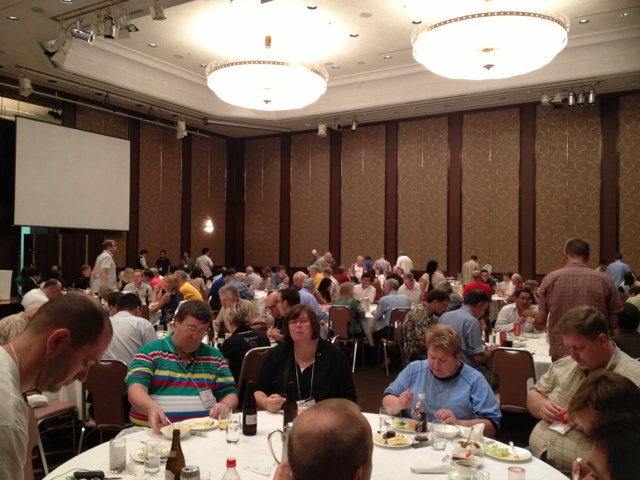 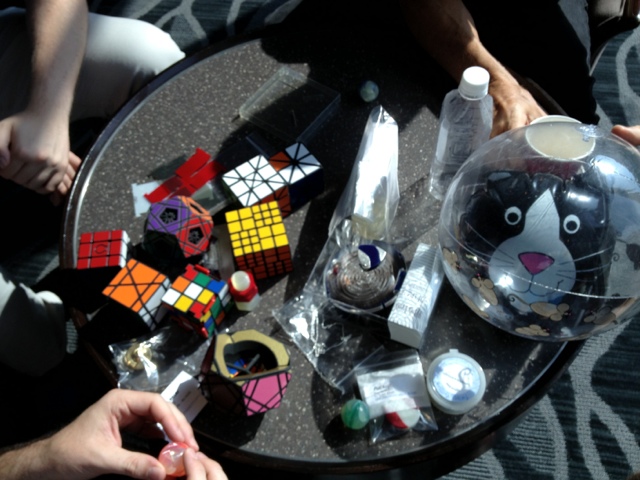 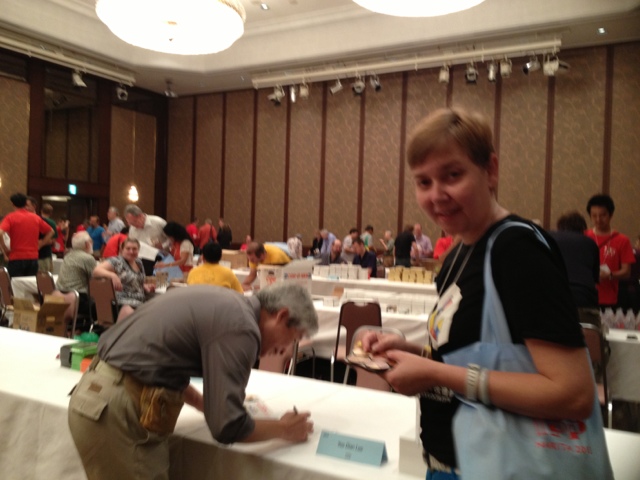 Exchange day. What more do I need to say? Nothing right?  Ok you twisted my arm. Ill tell you about it
We started at 9:00 and the official end was supposed to be 3:00.  This year started off with around 100 puzzlers and ended with a mere 65. I had the cutest little bug for an exchange partner. At first she was bored but then she really got into it.
After a while I needed a break and went out to get some air. The little vixen! Against all rules she exchanged 4 puzzles before I returned! Now my puzzle is to work out the object of those puzzles. After the exchange I stole a 1/2 hour for a bit of a kip. I'm beyond exhaustion.
I returned downstairs to play with toys once again.
I immediately purchased Scott's balls I've been looking for those for over year. Of course Chilean(trillion) and fucked (pucked) up had to be added to the mix. (I just love auto correct!) And the maze that he did was equally good.
After the exchange there were two workshops. The first was on impossible objects. And I leaned over to Scott's and said they were going to take the magic away. Even though I could see what was happening I was thoroughly mesmerized. The second was on origami. Holy crap! I didn't even bother I knew it was too difficult. And I prefer to embarrass myself in private. Of course Oscar managed to do the first two. My dear bug was devastated it was too hard for her and she loves origami. Carl did the same as I did he didn't open the pack. By this time I was thoroughly exhausted and went upstairs for a nap for a half an hour.
Tonight's the banquet and we sat down at tables as usual I'm with Oskar his wife Dave Carl his wife and a couple from Ireland. The entertainment tonight is a magic show. The first trip was speed solving a Rubiks cube by throwing it up in the air. I'm sure he cheated, because the cube was off-camera for a while. The food I survived on bread  tonight. It seems that there was nothing except seafood. And with an allergy to that, it's difficult to eat. But hey beer has wheat in it doesn't it? I've always been a better drinker than an eater.
I'm hoping to pass around it that we have a twisty puzzles meet up tonight but I'm not sure if that will happen. As always I let the pictures speak for themselves. 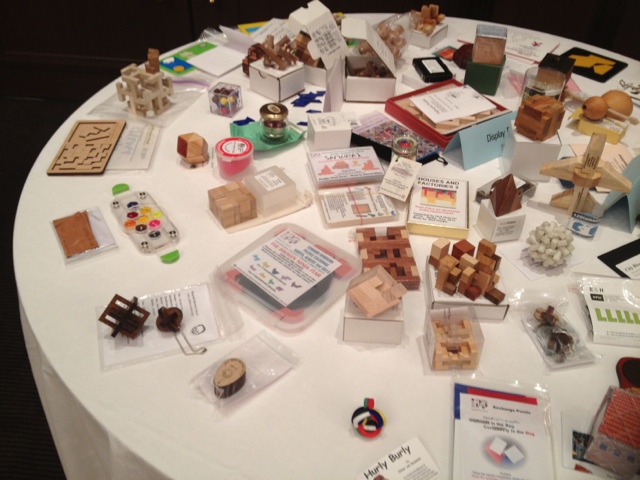 Posted by Roxanne Miller at 3:45 AM 2 comments: 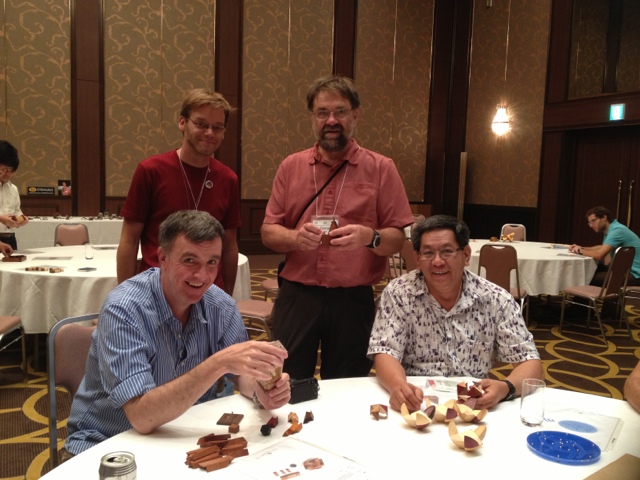 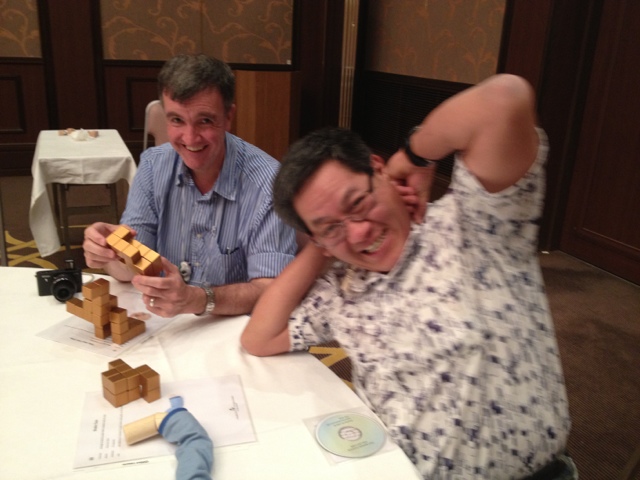 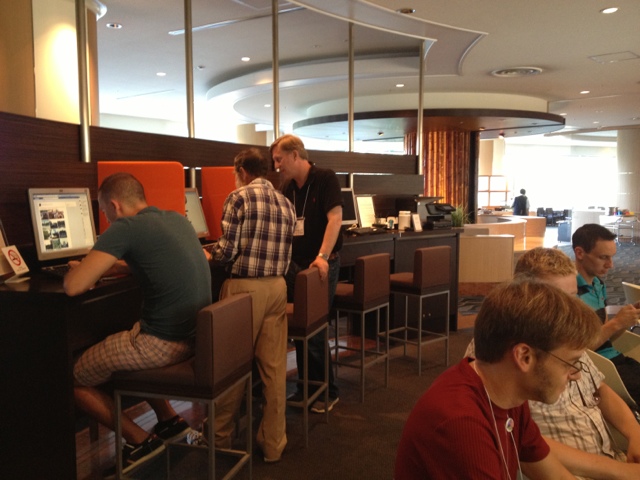 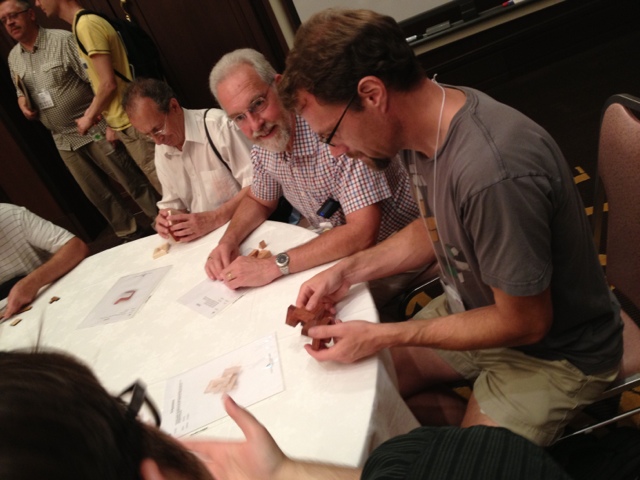 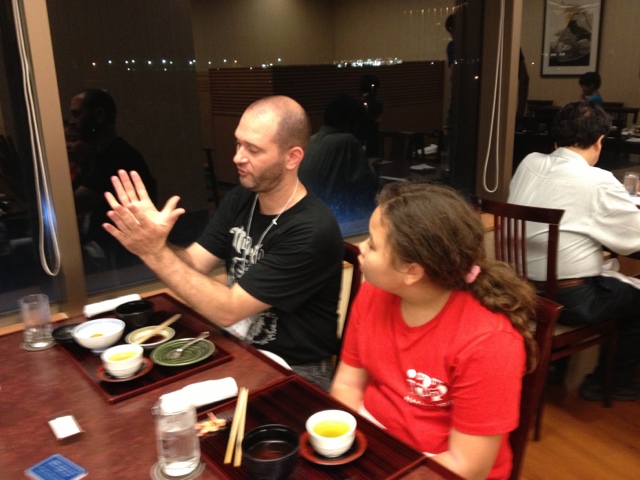 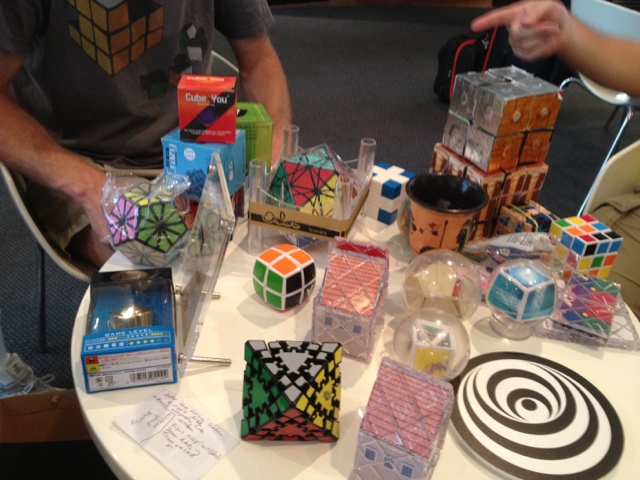 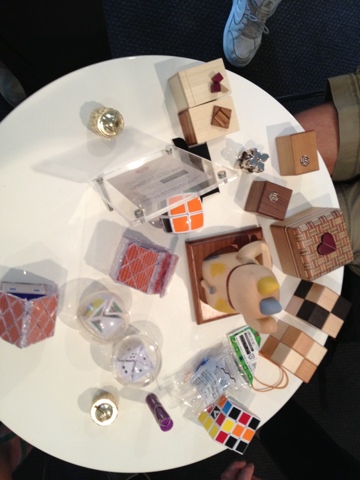 Friday saw me waking up at 1:30 in the afternoon. A full day. Three days four days of walking and exhaustion from GZ had worn me out. Of course the puzzling the night before had nothing to do with it. As usual everyone sat in the lobby and pulled out toys.
The founders reception was Friday night. But Catherine and I didn't go. She had enough of puzzlers and then she's been so good I obliged. Dave Litwin and I had dinner together. We were later joined by Bob. And headed up to the design competition room. Everything stayed in full swing until midnight. I've not much to say about Friday because I missed half of the day. I'll let the photos speak for themselves. 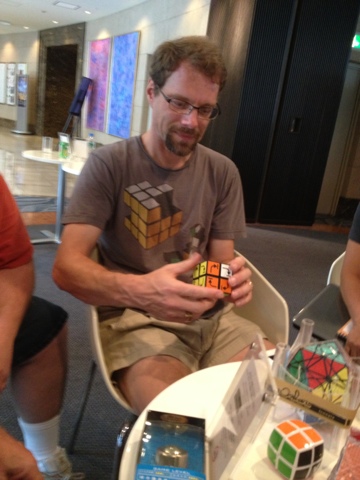 Well folks it's that time again. Katherine I got to Japan on Monday. At the airport We saw Rosemary and Harold. Together the three of us came to the hotel. When we got here we saw a few other puzzlers had a nice dinner together. And went to bed early. Tuesday's my kid and I at Disney sea. And on Wednesday we went to Disneyland with Andreas.  I know you're not interested in this part so I'll just let it pass.

Thursday was a great day we woke up in the morning and at 8:30 headed over to tribox and Hanayama. At Tarbox we looked at all of their puzzles and a cutting machine. Andrea went crazy taking photos for the twisty puzzles museum. George found a soma cube made out of a 3 x 3.  So we all had to buy one and get them signed. From there we headed off to the Hanayama offices. We looked at toys. We also saw some new products that they're coming out with but it's not a puzzle. All of us were given a gift of the cast cylinder the newest puzzle. It's a neat little thing. That has five pieces. They rated as a four out of six. Once again Andreas took photos for the puzzle museum.

From there we had lunch. Andreas and George went back to the hotel. Jose Oskar Scott Catherine and I went on to the Tokyo sky tree. Once again I went up the tower terrified as I was but I managed.

Later that evening we all had dinner together. And then set down to puzzle. Thursday was over. 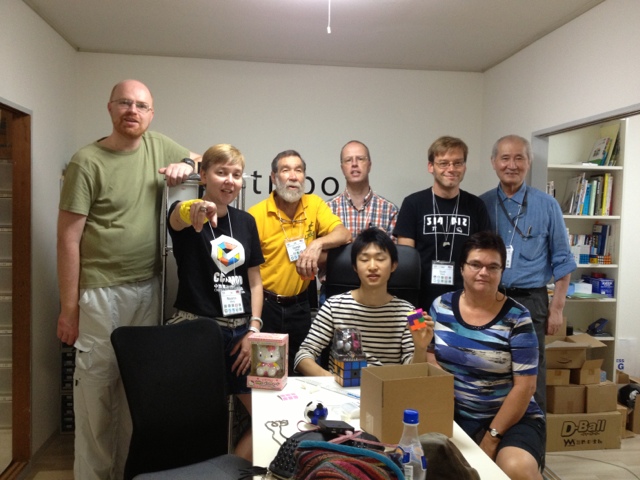 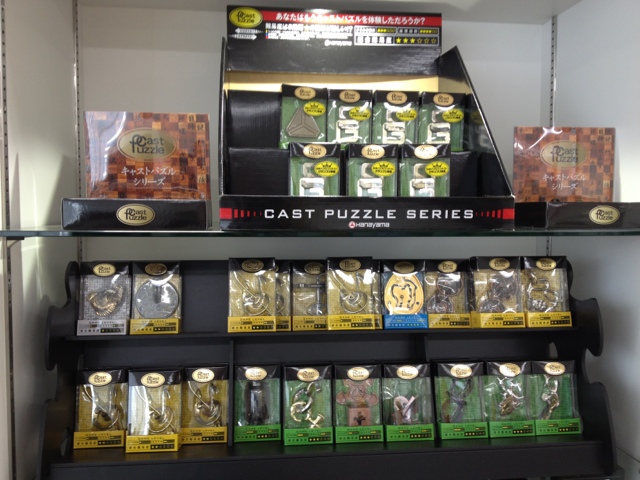 Posted by Roxanne Miller at 6:29 PM No comments: