The bidding still goes on for 2 more days unless according to the rules, someone bids up the price again on the last day then bidding will remain open for yet another day.

I was saddened when my first rather substantial bid was outbid within half an hour.  The second even more substantial bid stayed overnight, but we (a fellow HK blogger/puzzler) and I were out bid yet again.  I'm thinking of selling my bug so I can finance the puzzle.  Maybe take a second mortgage on the house....

More photos of this are coming in as the boxes get mailed to their designers.  I've taken the liberty of collecting them here (read wholesale theft-but I'm sure no one will mind too much as it really is a thing of beauty that they have all done)

Photographs are courtesy of Matt Dawson, one of the artists who designed a box inside the chest. 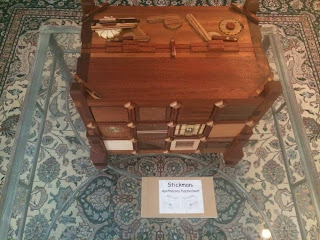 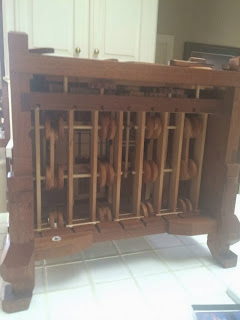 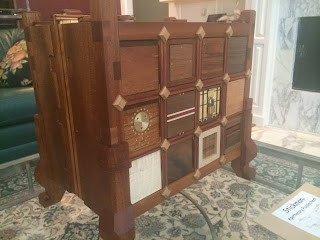 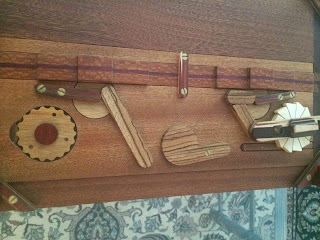 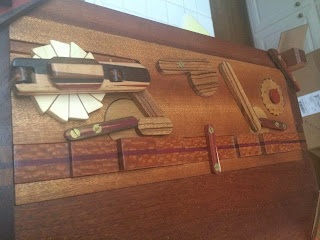 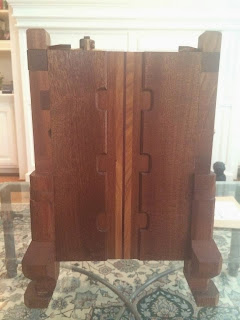 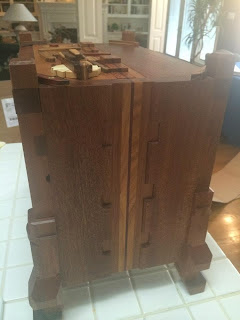 The best thing I've seen with this though is Jeffrey Aurand's unboxing video. Seeing this just makes me want to really go and hock my husbands new tv.

(Thanks for letting me steal this Jeffrey!  You're a star!)

And if that's not enough to sway you to go bid, Allard has written a beautiful post about it over on his blog as well.

If you want this beauty, there is still time to head over to Baxterweb and toss in your bid.  But be warned, I'm going to give it one more shot!

Posted by Roxanne Miller at 8:57 PM No comments:

Today I bring you not a puzzle of my own, but one designed by a puzzle friend.  The description below has been written by Robert, aka Stickman. 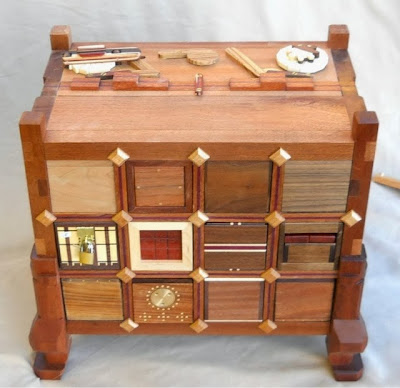 "The Stickman Apothecary Puzzlechest is a realized vision, over 4 years in the making, with the goal of representing an entire era of some of the best puzzle designers and craftsmen from around the world.  Twelve prolific artists from 5 different countries participated in orchestrating its creation.  Each drawer within has been quality hand-crafted to exhibit the best abilities and individual styles of these artists.
The chest itself is also a complex mechanical puzzle.  The solution of individual puzzlebox drawers is required to obtain mechanical parts, and these are required to progress its sequential movement.  Within the chest, mechanical pistons lock drawers into place while still allowing them to slide freely.  Pushing in on a drawer causes others to automatically extrude from the chest.  And in turn, pushing those drawers back causes yet other drawers to come out in an apparently random fashion.  Deducing the pattern and sequence of drawer movements is part of the puzzle to this chest, as drawers can only be released under certain conditions.  Once a puzzle drawer has been removed and solved, pressing it back into its slot will automatically re-engage it into its locking mechanical piston.
Enough cannot be said about the puzzle drawers designed by contributing artists; many of whom have received awards for their abilities.  The only restriction placed upon designs was the size of the puzzle, which required parameter sides of 3” just to fit into the chest, (some puzzles are 3” cube and others measure 3” x 3” x 4”).  The goal was as to require minimal restrictions in order to ensure the true flavor and style of each artist
The designs of puzzlebox drawers vary from the seemingly simple to exhaustingly complex.  Some require just a few profound and elusive steps, while others require moves going into the hundreds.  Many of these puzzles are exclusive to only this chest, or significantly limited in production, and are therefore rare.  With such diversity in complexity, concepts, and styles, there is something appealing to everyone in this chest.
The chest is crafted from quality sapele wood, decoratively accented with purpleheart inlays, and measures 18” x 16” x 12”.  It rests up on a base of intricately carved wooden feet and comes with a 15-page, fully illustrated instruction book.  All drawers have been signed and numbered by each artist.
Originally, the only way to obtain one of these chests was to be an artist contributing to the project, and none were intended for public sale.  However project bylaws have since been expanded, now allowing for two additional copies to be sold at auction to help cover expenses.  Stickman Apothecary Puzzle Chests are limited in edition to only 15 completed copies, and this particular chest is #15 out of the limited edition set."

Go over to Puzzles.baxterweb.com. Apply for an account and start bidding! 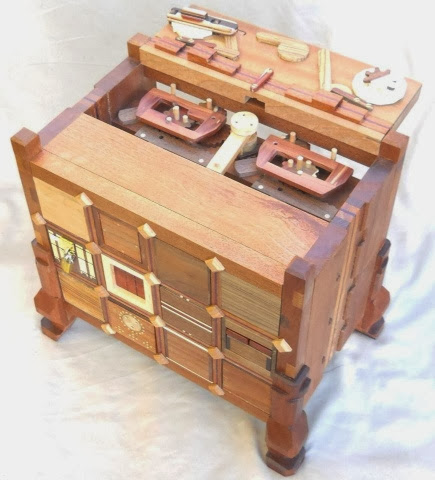 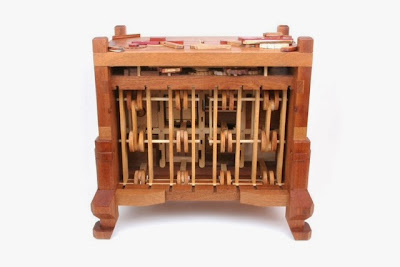 Just want to add this information about the boxes inside the chest.  Links provided to blogs where available.
Because of the import of this chest, my usual Christmas post will be delayed until New Years Eve.  I'll have a little something different in store for you all this year.

Posted by Roxanne Miller at 11:57 PM No comments:

A few weeks back I was on Renegade forum and read about a new blogger.  This one posts interviews from the designers of the puzzles we know and love so much.  Turns out he lives in Hong Kong and works just down the road from me.  Well, I sent off a private message right away and we exchanged phone numbers. 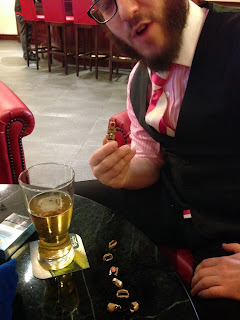 A few weeks of messages going back and forth and we finally managed a time to meet up.  We decided a drink was in order (when isn't it?) and met at the local mariners club.

I got there about an hour earlier than Saul and had a beer while waiting.  I'd just ordered a second when he came in, and I've got to say, he's the kind of boy I like.  He walked in, ordered 2 beers and downed them lickety split.

Once we had established that drinking was on the table, we got down to some puzzling.

First up:  Why David of course.  Rox just loves that puzzle.  I would wear him all day long if I could.

We had chatted earlier about a few puzzles and Saul brought along Dancing Shoes.  A really nifty puzzle that is.  It has such an elegant movement to it.

I was asked to bring along Cast Delta because he wants to meet the designer.  I think that can be arraigned at some point...But because of another post over on renegade, I went ahead and brought along a Stickman box.  Saul was taken by it and fiddled away for quite a while.  Delta be damned.  He lost interest right away.   Anyway, here's hoping he interviews Robert for his blog.  There is an amazing puzzle of his and another 15 designers coming up for auction fairly soon.  If I were rich, I would definitely 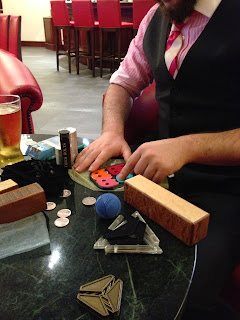 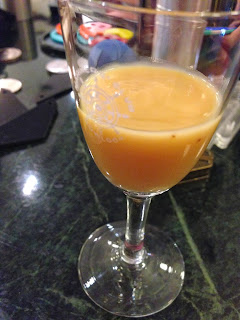 go for it, but that kind of puzzle auction is way out of my price range.

From there I pulled out Eric's Cigar boxes and we fiddled with those for a while.  A few more toys came out and a few more beers went down. Being the holiday season, when Saul asked for something a bit stronger, I ordered an Advocat and a shot of whiskey.

We stuck around for a short while puzzling some more then headed out to a bar on the other side of town.   Yep.  He's a puzzler I can get along with!  I've decided to take him along for my next boys and toys across the border.  In the mean time, I've loaned him Robert's box and I have his dancing shoes...A perfect excuse to meet again. 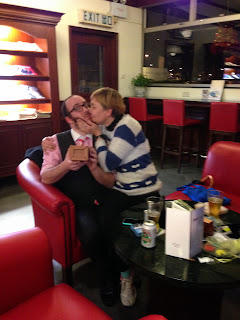 He can't be in that much pain can he?  it's only an innocent kiss from Rox.

Posted by Roxanne Miller at 8:17 AM No comments:

Stay tuned folks. It's the puzzle girl vs the designer interview guy coming soon to a blog near you.....
Posted by Roxanne Miller at 4:47 AM No comments:

Or not.  This is the height of testing boredom.  A pen maze!

I went in to work this morning fully intending to be good and do nothing but read between.  Yeah right. This is Rox we are talking about.  I can't read for 4 minutes then quit.  When my nose goes into a book it stays there so puzzling is a much better option for days like this.

Now I brought along a few twisties, but the pen on the desk fought my eye and that was that.  Ok ok so we've all seen these before, there's nothing new or exciting about them. You roll the two balls from one end to the other and maze solved.  Not much of a challenge there is there?  So I made one up in my little head and played a game with it.

Solve the maze under the table while working without looking and without making any noise.  I gave myself 12 minutes to do it and although I've tried 9 times now, I simply can't do it.  Why? The noise rule for starters.  If I'm making ball rolling noise I'll be in big trouble.  The second problem? Well, look closely at the pen.  The ball on top is stuck.  See, all pen mazes are not created equally.  This one has a thicker sheath at one point and try try try, I get stuck at that point every time.  Go back to the first rule: no noise. 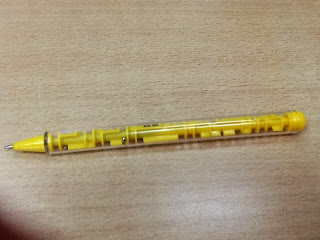 Ok. So I've 6 more goes at this befor I leave here and along with my leaving, I must leave my new found toy.  I don't want to be a pen thief (again).  Wish me luck all!

Update: I found another pen exactly the case maze, but bigger sheath. I guess this does mean that bigger is better! 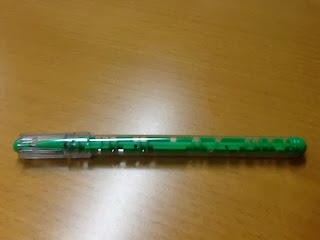 Posted by Roxanne Miller at 10:54 PM No comments:

I first saw this puzzle at IPP 34. Needless to say, I didn't solve it.  I find when in the puzzle competition room I'm not at all good at solving puzzles. I look around and see everyone is doing better than I am and suddenly loose all sense of puzzling. 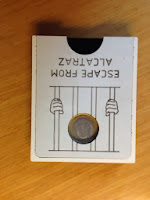 When Wil sent out his October newsletter, I saw it was up for grabs and had to purchase one.  Let me tell you, this puzzle has given me a bang for my buck.  I've fiddled with it off and on since it came in, but have been unable to do anything with it.  Oh the first move is easy-well, the puzzle itself makes the first move.  After that it becomes quite tricky.  I tried solving it on a Saturday while working but between the holiday season sore head and the candidates interrupting me every 20 minutes, I got nowhere.  On Sunday I brought along a few easier puzzles to make myself feel less dumb (see post of 1 December) and as expected, solved them rather quickly. This brought me back to Escape from Alcatraz.

The object of the puzzle is to remove the one euro coin.  Easier said than done.  I fiddled with this one for around three hours in total before I got ticked off at myself and threw it across the room.  Like the metal ball version of Alcatraz, I did something but I knew not what.  When I picked it back up I managed to reset it so followed another hour or so of frustration. 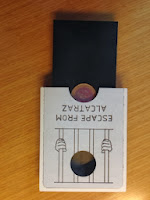 And then the light went on!
I was almost there. But still not quite.  Oh so close and then I had an inspiration.  After a bit of twisting and turning I discovered this! 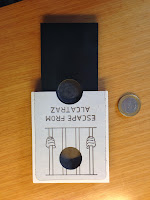 And It has just occurred to me that maybe the reason I was having so many problems solving this one is that I was holding it upside down the entire time?

Posted by Roxanne Miller at 5:00 PM No comments: