Since I've started this PhD, I've resigned myself to having to travel to Finland once a year (as if that bothers me).  I wait until Conference season and tack it on to that trip to save the wear on my slightly aging body.  Last year I posted on FaceBook that I was going and Tomas Linden  got in touch to say the Finnish Puzzle Party was taking place that week and asked me to join.  I enjoyed it so much, that this year when I planned my trip I contacted him! 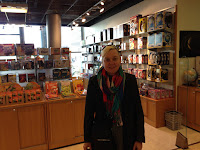 First stop Helsinki for a night and of course I had to visit a puzzle shop!    Nothing for me though.  Can you tell how cold it was there?  Next stop Jyväskylä and a bit of intensive study before I headed off to the puzzles.


It was just as fun as last year and there was no disappointment at all.  This year the FPP was located in Turku along the southwest coast of Finland.  It's a very beautiful city and I enjoyed walking around it with my husband.  (Did I fail to mention he came along?) 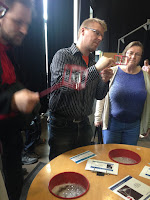 We first went to a mathematical exhibition at what I think was an art center.  We had a bit of a guided tour, and while most of the items on exhibition I had seen before, we did get into a good discussion about why balls travel faster down different planes, and there was a really cool dice counting thing that I had never seen before.  You dump around 40 dice on the table, roll them then line them up randomly. Start with the first di and count that number.  As you go through the dice, you should end up with a few remainders, discard those, roll the rest again and restart the count.  You will then end up with no remainders.  I don't know what this is called, or why it happens, but it is sooo cool!  I was fascinated by it.  It was also great fun to watch the boys playing with bubbles! 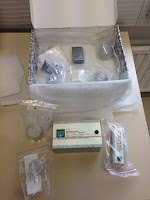 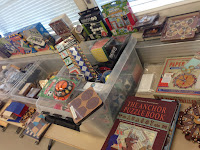 From there we headed off to a school to do a bit of talking and playing with puzzles.  Of course Tomas was selling and I managed to get a few toys myself.  Once again it was a good haul! 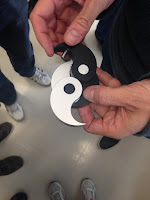 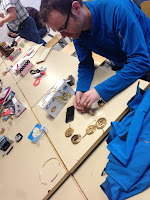 I listened to a talk on different shapes and tiles that forgive me, went over my head, but was very interesting.  A icosahedron turned inside out makes 2 cubes.  Is that right?  Gave a short talk on where to buy Berrocals and then went on to puzzle play.  All in all we spent about 4 hours chatting and playing. I brought along the astronaut and sort of forced Vesa to reassemble it.  (I took it apart to show him how easy and different it was from the others I've brought in the past and made him fix it).  Sorry Vesa, but I really take great pleasure from watching people play with them.  (and thank you for the disk!) I brought along my copy of the 69 puzzle an if you count the shoes, you can see how many people it took to solve and reassemble the puzzle.  Good fun! 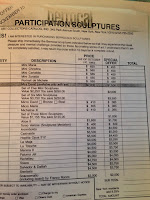 After we went to a man's house...Sorry, can't remember the name. We puzzled for another 4 or 5 hours, had a late bite to eat and headed home. While there, I managed to find an original price list for the Berrocal's I love so much.  How I wish I had discovered them 20 years ago!

We had some good fun playing with tops and various other what's its.

I can't wait until next year.  I hear it's going to be near a puzzle shop I went crazy in last year!

Next stop: Copenhagen and a little shop that had to be found and a short visit with Oskar and José.

Posted by Roxanne Miller at 10:43 PM No comments:

Amsterdam and a few puzzlers

After returning from my trip into China, I was off for conference season again.  This time Mr. Man decided to come along for the ride.  Poor guy was bored out of his skull.  Between puzzling and study he really had to entertain himself. 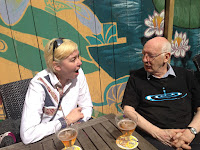 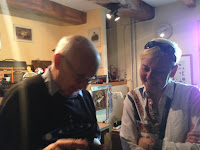 Our first stop was Amsterdam, he'd never been and I wanted to pick up some licorice.  Oh and stop in and see a few puzzlers as well.  We decided to go walk around the city and take in a few of the sights, and on the way, I stopped in a museum shop.  I managed to find a Rubik's cube at the Van Gogh museum and of course had to pick up a copy.  As we were walking, I realized that we were just a block away from Nanco's house so I gave him  a call and we stopped by to see his collection, and to have a late lunch and a few glasses of beer.  I really enjoy meeting with him. He's such a friendly man and oh so interesting to listen to. 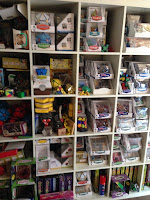 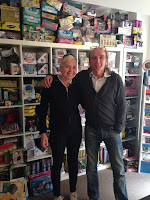 Nanco had a dinner reservation so we said our good byes with the promise of returning on my next trip.  The next day was Monday and we were off for Finland-study and FPP-but before we left, I had one last person I wanted to visit.  I had to make a stop off at Recent Toys and say hello to Guido.  I had seen him in January at the HK toys fair, and he promised me a copy of Houdini. Since I was in the neighborhood......I thought I'd stop and take a few photos as well.  His office is cock-a-block full of toys!  I love looking at them. Not surprising, I had all but the two that he gave me.  Of course, in my defense, I've been playing this game for a few years now.  We spent an hour there chatting about production woes, new things to come, and his next visit to HK.  I'm sure I'll stop by and say hello again on my next trip in....

So far, it was a good trip.  And the best was yet to come.  FPP and a short visit with Oskar and José.... 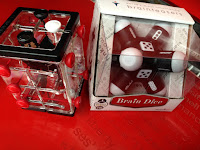 A puzzling day in Hong Kong

Time flies when you are busy.  Forgive me for my late posts but be prepared to be bombarded with lots of drivel from Rox.

For the past few years there has been a puzzle exhibition with talks and play time held at a local high school right next to my university.  This year was no exception.  The puzzle party was held on the 2nd of May (see how late I am!) 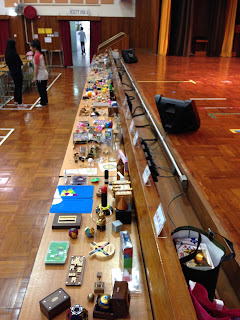 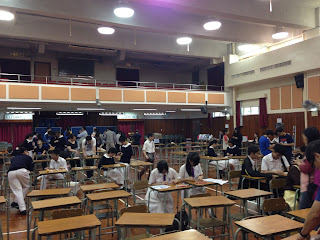 It all started around 10 in the morning.  I missed the talks, but ran over around lunch time and dropped off a few puzzles to put on display.  I hung around and watched people play puzzles for the next 5 hours.

This week was a real treat for me.  Not only was it a weekend of puzzling with my local puzzle friends, but others were coming into town too. 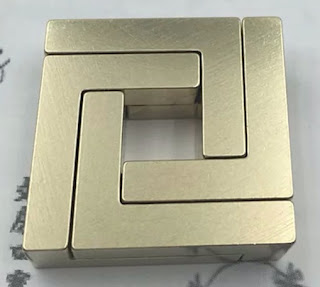 When I got to the venue, I made a beeline for my dear boy Otis who flew in from Beijing for the weekend and gave him the standard Rox greeting of a hug and kiss.  Ricky was there, as well as Victor and Smaz.  Victor brought me some brass copies of the cast quartet that were made by a man in China, and before you get your nickers in a twist, I bought two copies as is my brief and handed one off to Kyoo when I saw him a few days later.

There were stalls selling puzzles, and lots of tables set up both to display some of our collection and for people to play with.

At 5 I had to run off to the airport to pick up our favorite prototyper.  After dropping his bags at his hotel, we ran to a puzzling dinner.  Sadly he had jet lag, and the party ended for us around 9:30 so I could take him back to get some sleep and adjust to the time difference.

Earlier in the week, I saw a Facebook post from Tanya who was excited about her first trip into Hong Kong.  Sadly she couldn't join us for the day or the dinner, but the following lunchtime, we all met up and had a nice little chat.  It was  too short as usual, but she had work to do, and Otis had to go pack.  I'm not sure what the other one did, but I had a family thing that night and that was that. 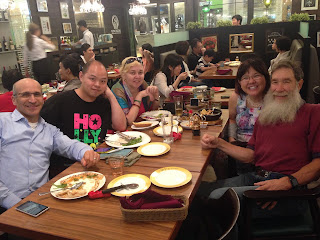 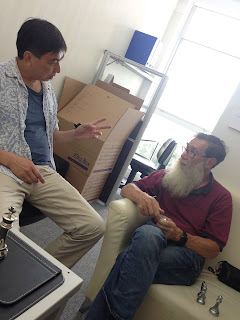 The next day, I took George over to the Hanayama offices to visit with Kyoo for a while before I had to leave everyone for a conference in China.  As always, it was great to see friends, but the time was too short.  And, I looking forward to the next puzzle party in Finland....
Posted by Roxanne Miller at 11:31 PM No comments: