Around 4 years ago I had received a private message from a young puzzler asking if I might show his creations to my friend Uwe in the hopes that they would become mass produced.  Being the nice lady I am, I of course said yes and the puzzles were on their way to me.

A little while later another puzzler sent me another copy of one of the puzzles and I was ready to head to the manufacturers.

I'll be honest, while they are lovely puzzles, I knew when I looked at them that they would not be made. Too many parts, not appealing to the mass market, to small and to make it big enough would be to make it huge....I could hear Uwe already and I hadn't even shown him.  But I was duty bound and I took it over.  Sure enough, That's what he told me.

I didn't give up hope though and took the puzzle on to Mf8 and CubeTwist.  Both said similar things. Well, I boxed up the puzzles then and sent them back to the designer.  A few months after I saw the other puzzler at IPP in Berlin and hand delivered his.

To my surprise, when I got back from IPP I had another package from the young puzzler.  I opened it right away and inside were the two puzzles I just sent him.  Not delivered, return to sender.  I took the puzzles out of the box, put them on my shelf and forgot about them.  I showed them to a few other manufactures that year, but then.... 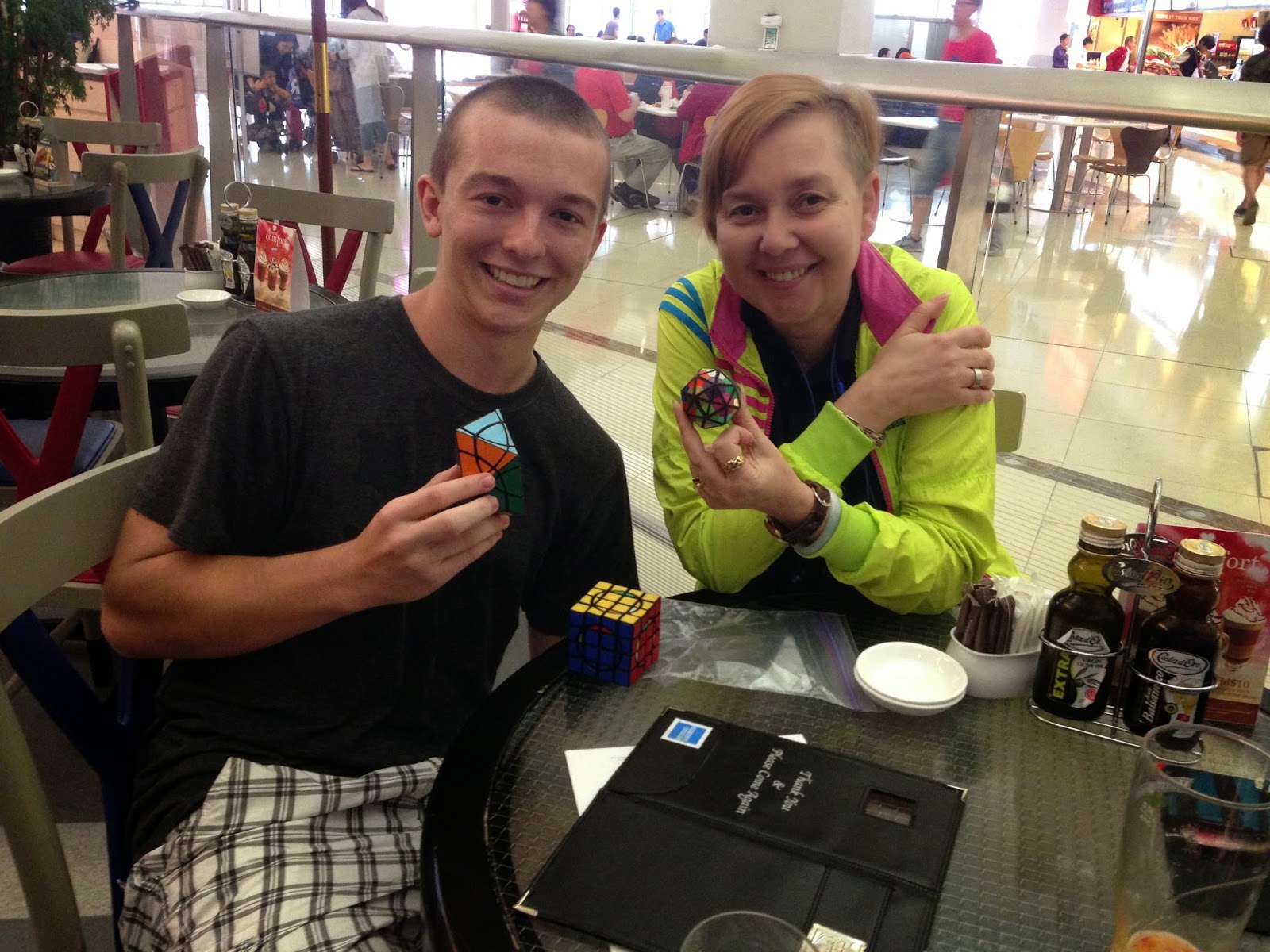 Fast forward to last month.  I got yet another private message from that same young man stating that he was in Singapore and would be in HK soon.  Would you care to meet up Rox.  Well heck yes!  Why not?

I was thrilled, but he didn't send me a date. Well, he did.  But I missed it.  What a debacle.  I had to work, then had a dinner and totally messed up.  To compensate, I ran to the airport as he was leaving so I could deliver his toys and finally meet him. We met up, had a drink and a nice-although short-conversation.  Tanner is a very nice young man.  I'm glad I had the chance to meet him.  The puzzle he designed was brilliant for the age he was at the time.

I've never shown these to anyone outside the designers, and I now have his permission to do so. If anyone is interested, contact Steryne over on Twisty Puzzles.  I'm sure he'd be thrilled to hear from you about them. 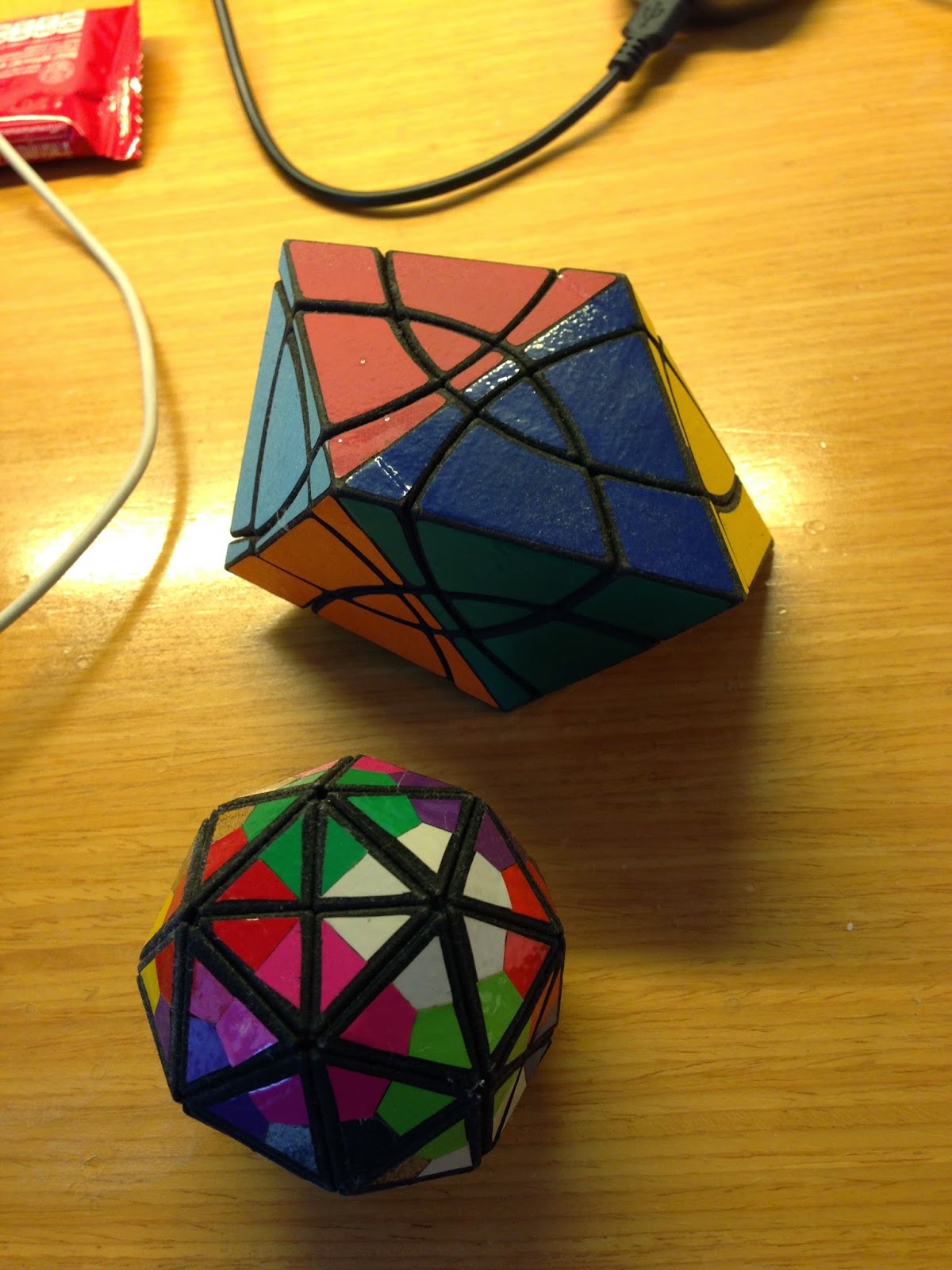 Today i give you yet another Berrocal.
Astronaute hommage á jules verne (1979-1980) 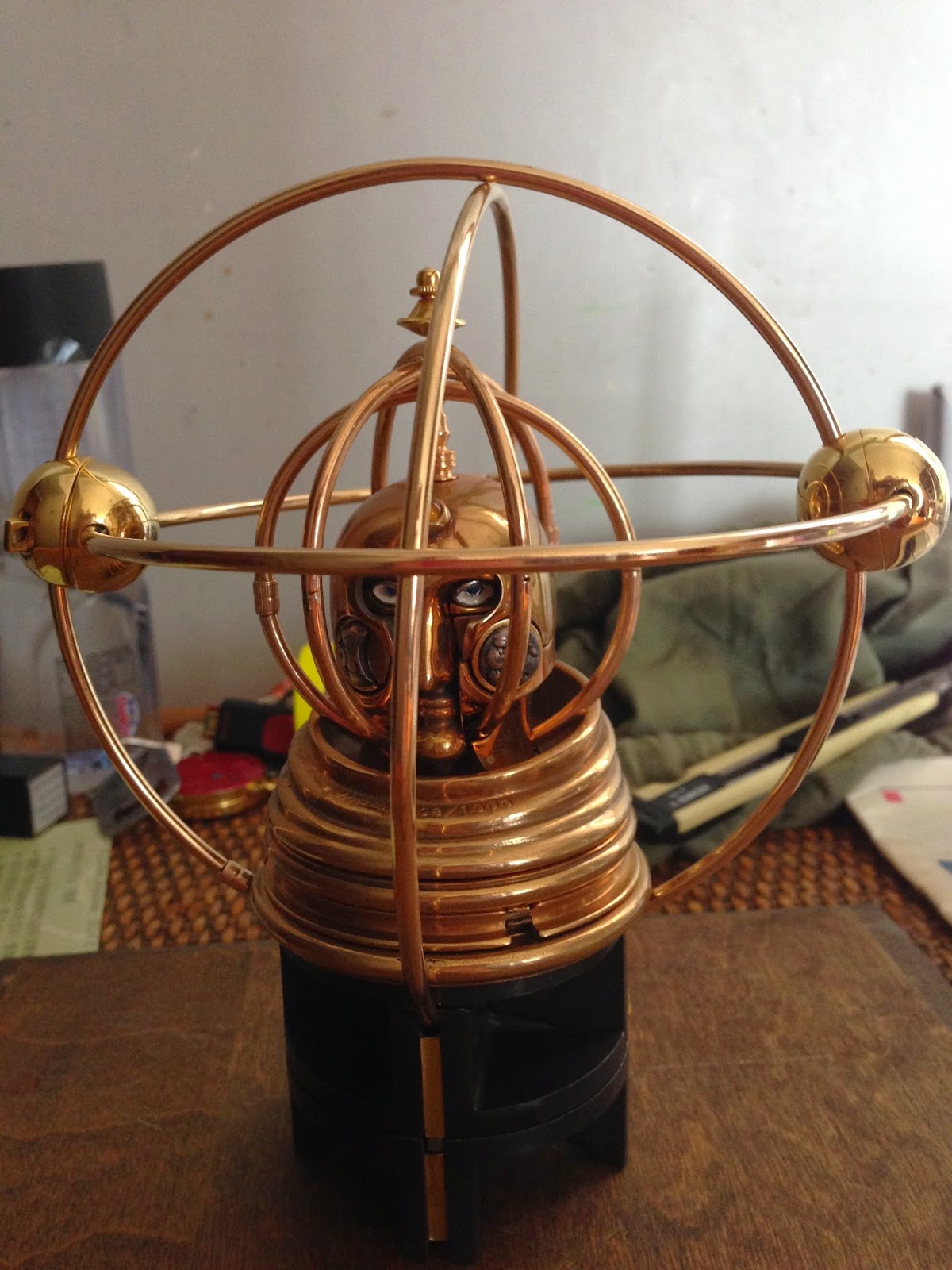 I paid a small fortune for this puzzle, but it was well worth it.  I'd seen it before on the internet and was intrigued.  When fellow puzzler Jim was cataloguing his puzzles, I asked him for a disassembled photo of it.  He obliged and I jumped on the puzzle!  This girl loves her Berrocal's and when it's jewelry!  Even better. 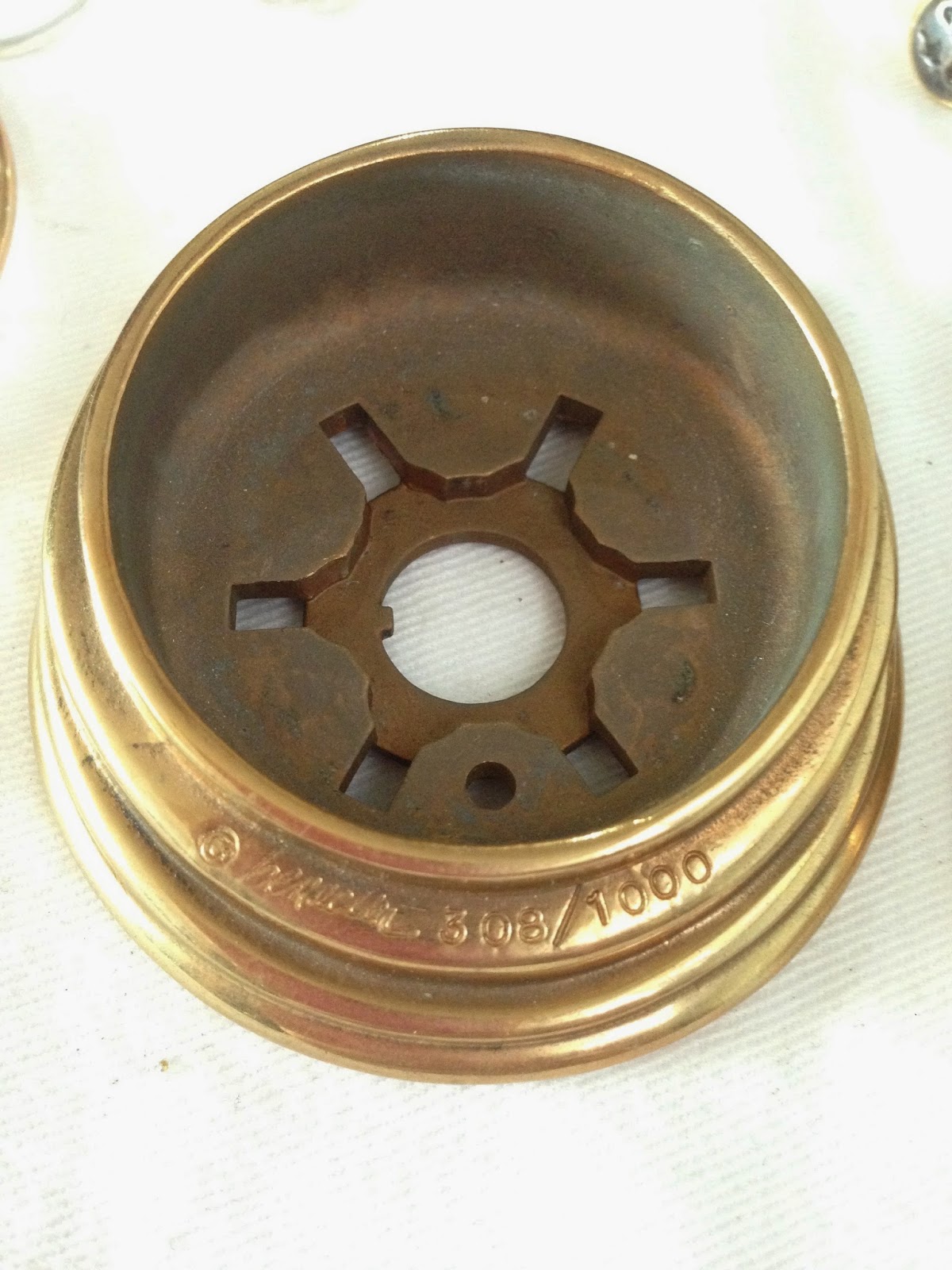 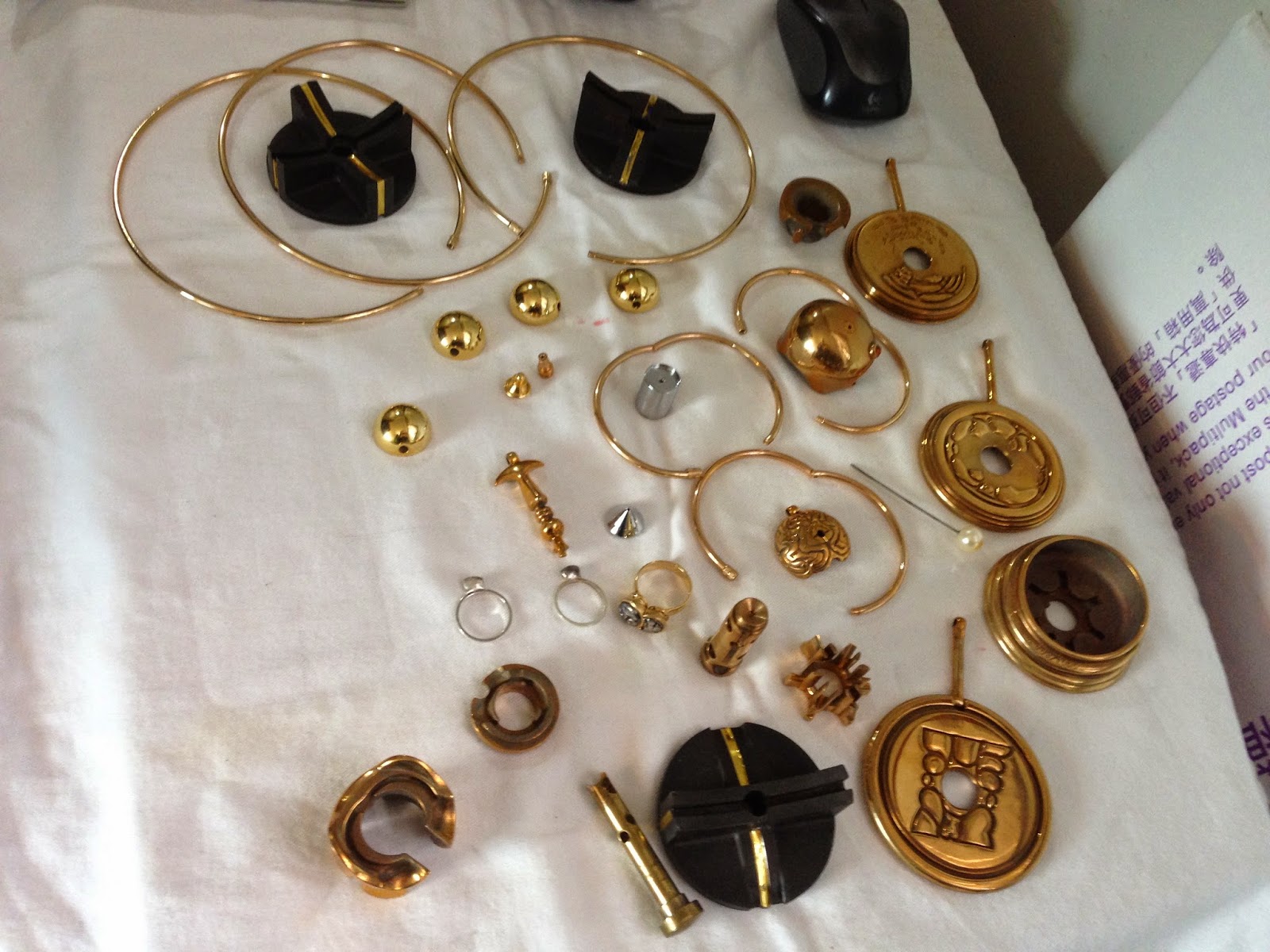 The puzzle consists of 35 pieces.  Sadly, when I received mine 2 of them were missing but it's not a problem. I have already gone to the jewelers and am having them made.  The missing pieces are the holders for the earring balls.  Not a large missing piece and easily replaced thanks to the photos in the book.
Mine is number 308.  I'll be honest, it took me a long time to find the number. I must be blind.  I looked and looked and while chatting with a fellow puzzler just stumbled across it.  Not a noticeable number like on the other Berrocal's I have.   The dimensions follow:

130x162 mm
Head 66x108mm
1000 bronze exemplars, The rings are silver.
200 silver exemplars (I've just been told these have been changed to stainless steel not silvr-thanks Jim) and
6 18k gold exemplars.  It was made using lost-wax molding.  Which is different from the other Berrocal's I have.  The rest are cast. 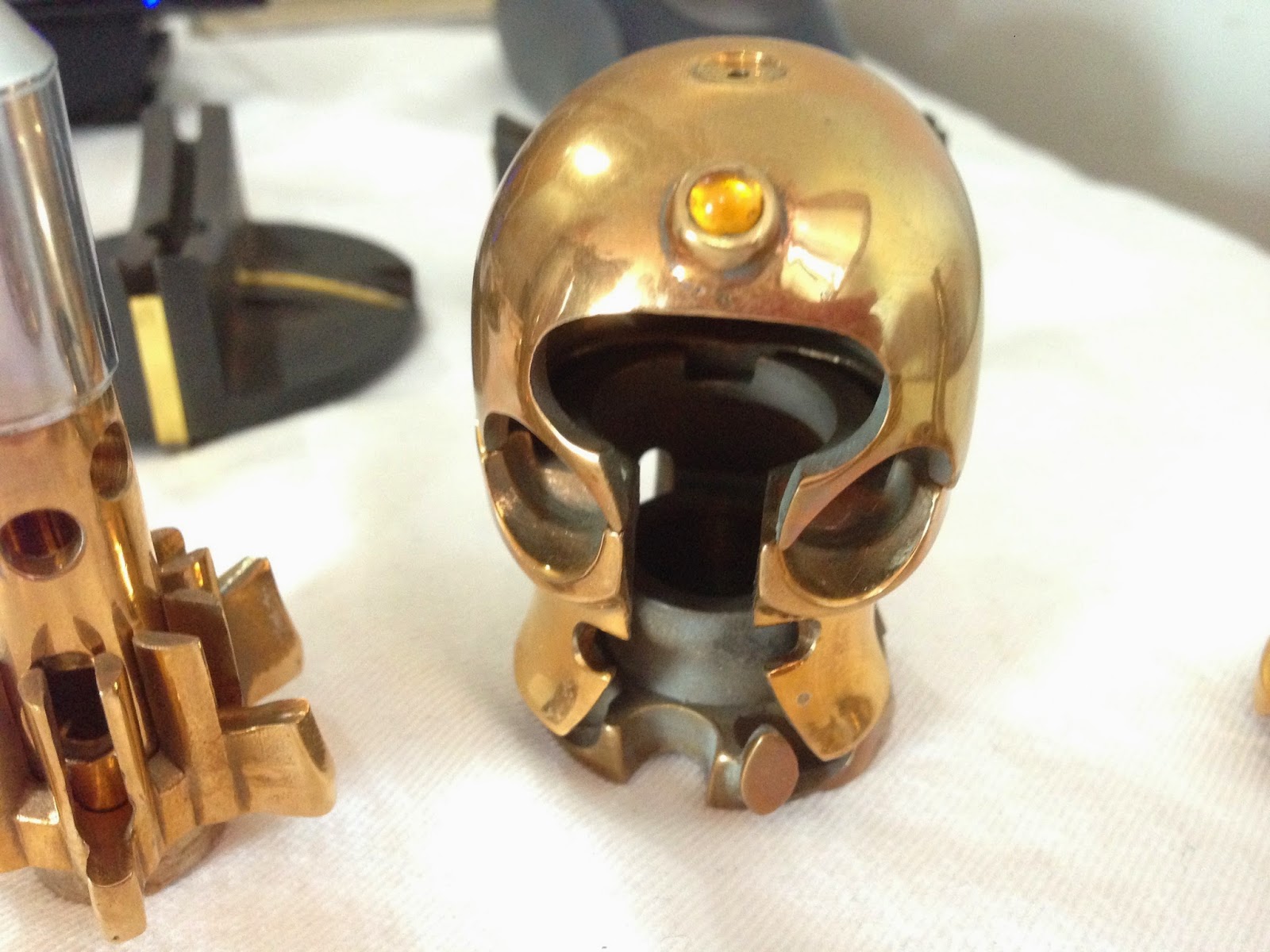 The next part of the sculpture makes up a divers helmet. Pretty neat. It is pictured to the left in it's stand alone position. Once the helmet is removed, you can take out the brain and the face. The eyes come out next followed by the cheeks. As I write this, I can't help but think of butchering a human-Hannibal Lector style.  What a horrid thought.  The eyes are 2 silver rings that are enameled and the cheeks are made up of a folding ring.  One side is a moon and the other is the sun  The two pieces have a clasp that holds them together. Both the brain and the face can be worn either as pendants or as charms on the bracelets.  They can also be connected together.

Under the parts of the head, there are a few parts that make up a rocket ship that can take you to the moon.  This puzzle just keeps getting better and better doesn't it.  Pretties to wear AND a rocket!

Below the Rocket base is a set of three round plates.  Each of these can be made into a pendant. These have cylindrical and conical anamorphoses of a male torso which are viewed using special cylindrical and conical mirrors contained within the sculpture.  The mirrors are the upper most parts of the rocket ship shown to the left.

I attempted to photograph the pieces, but I cant do it justice so I've added a photo from the book. 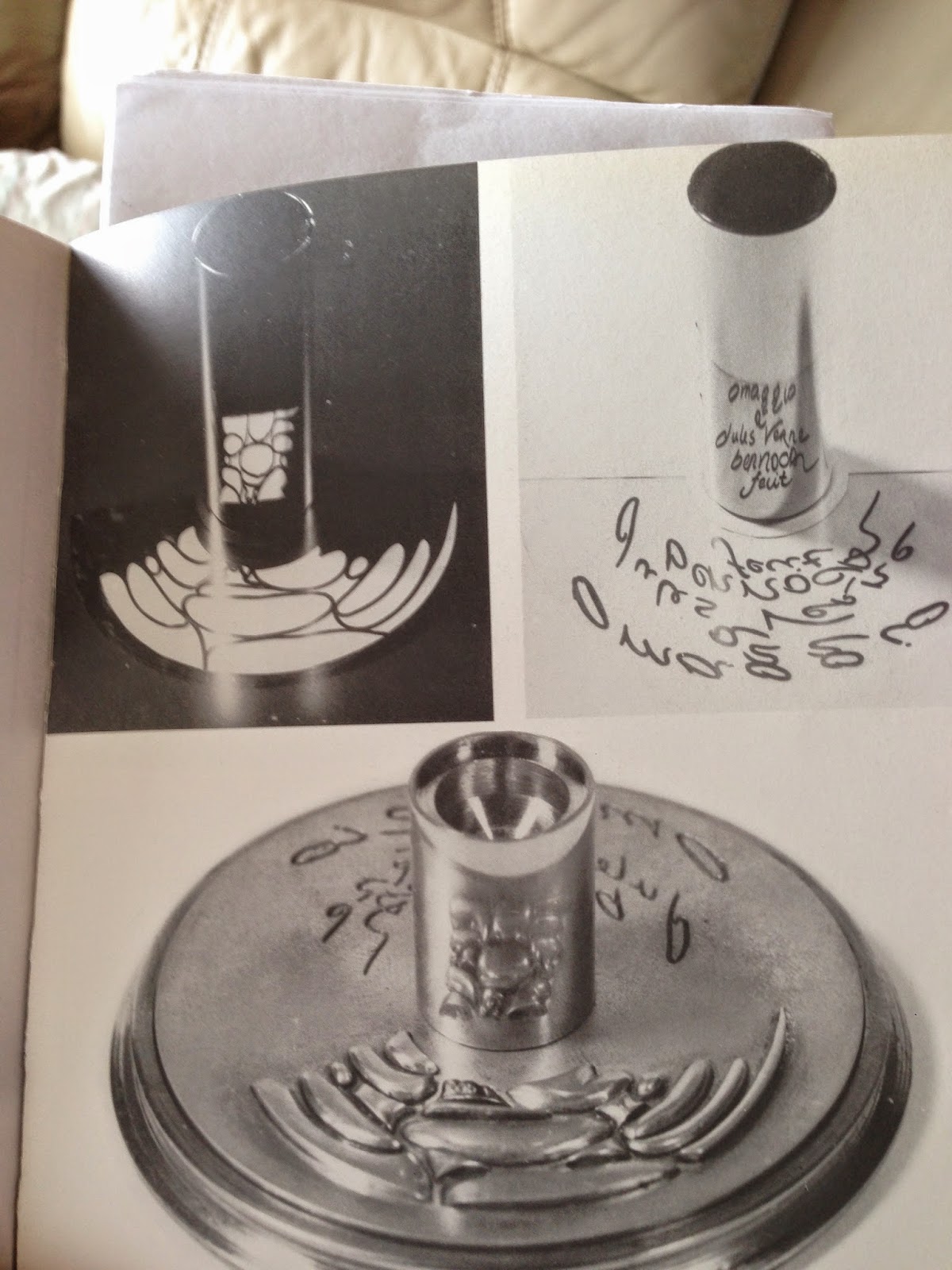 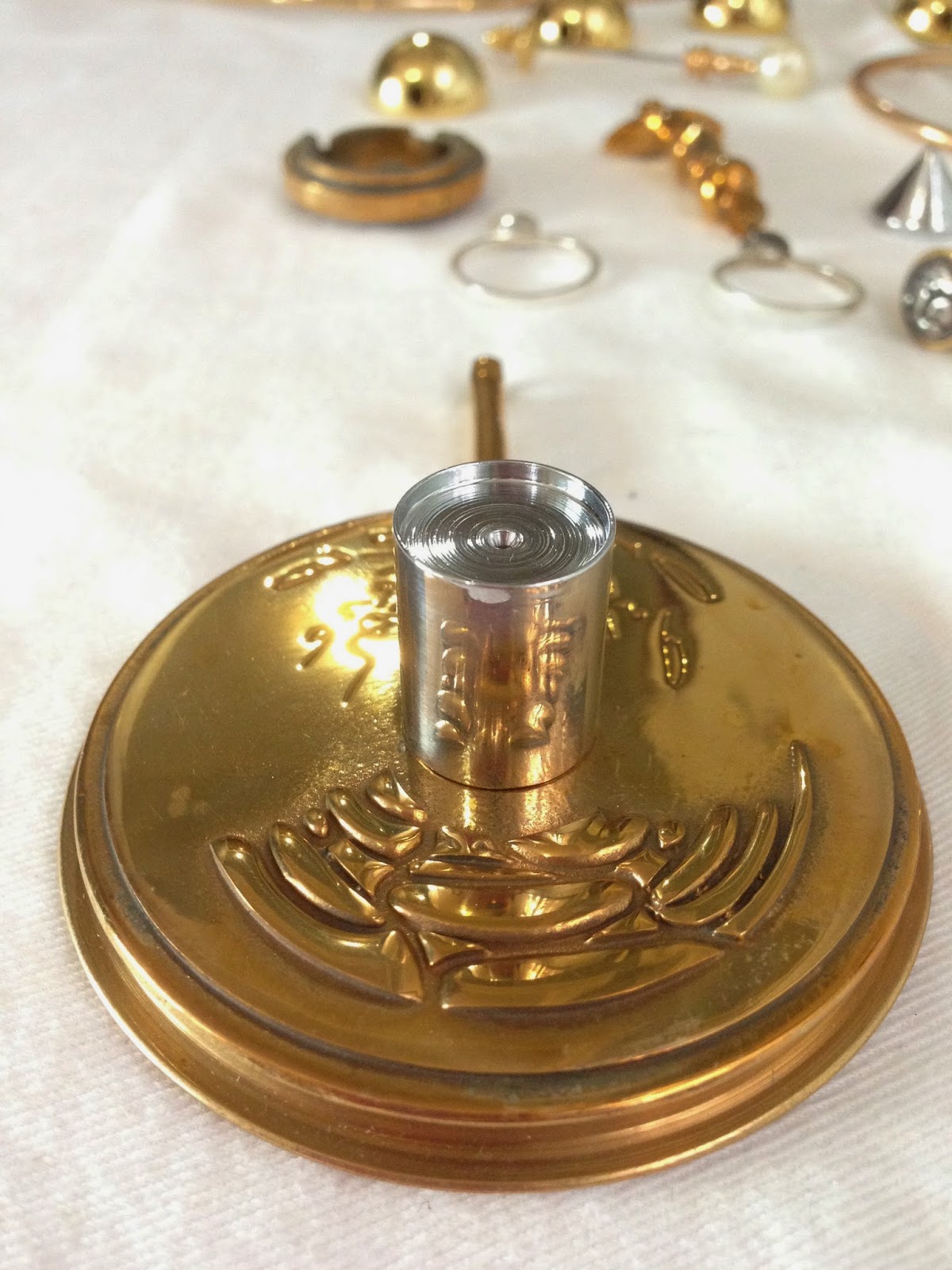 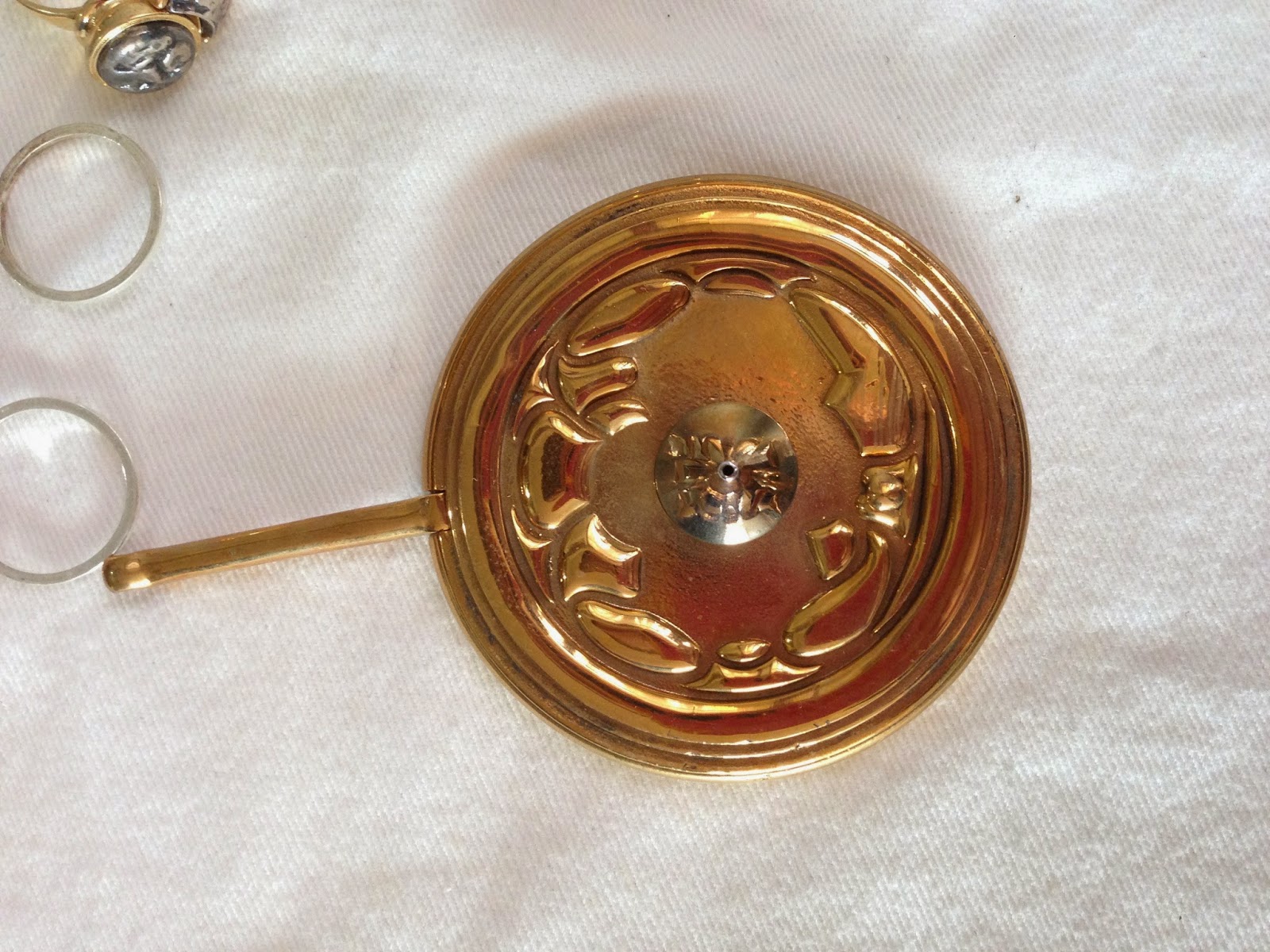 Below you can see the jewelry all put together. The base that the sculpture stands on can be used to hold the 3 pendants.  A very clever design if I've ever seen one.  The genius of Berrocal never ceases to amaze me.  And because of this, I know I'll be hunting down more.... 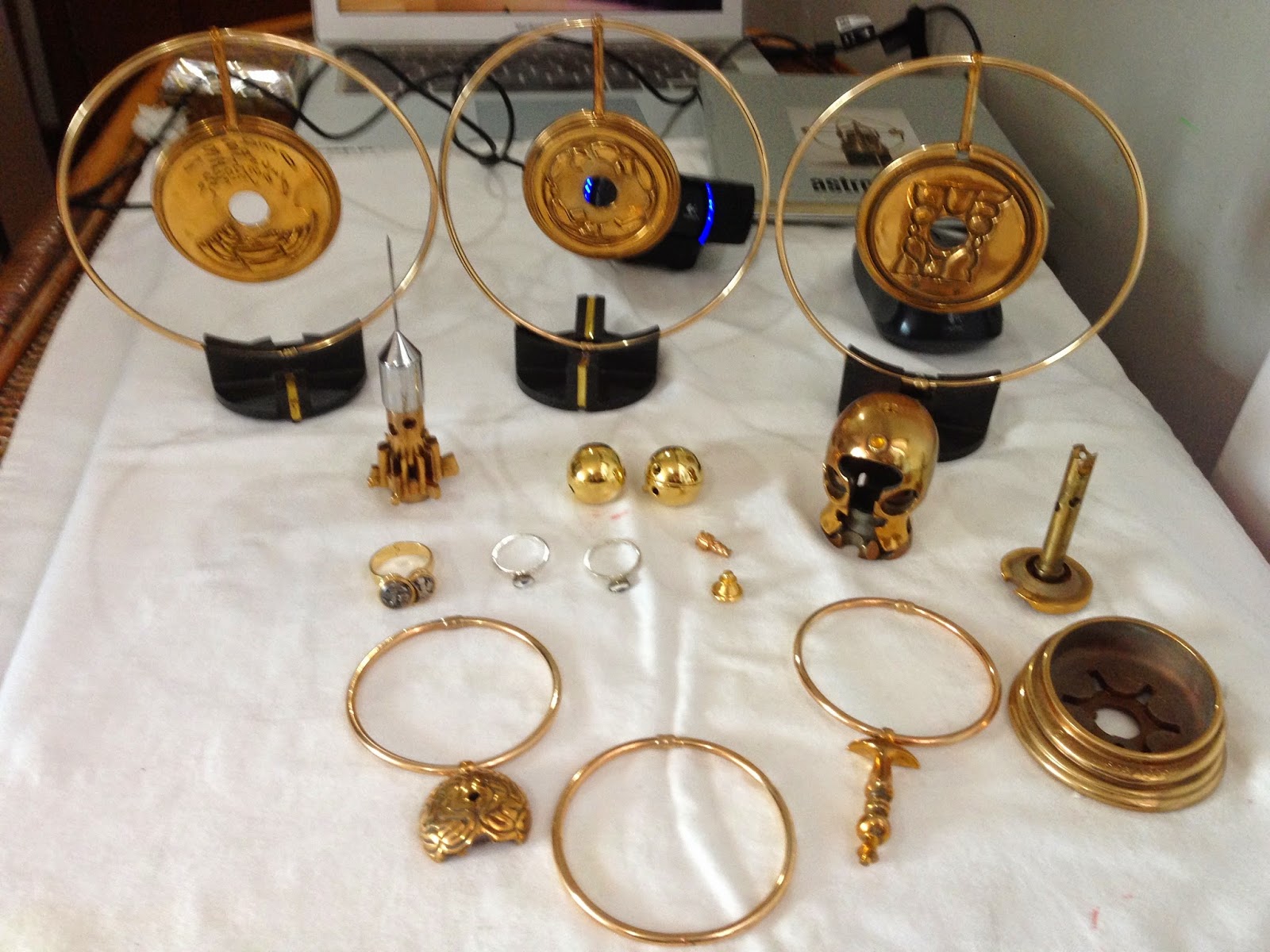 As a final set of photos, I have put some of the various pieces of jewelry on.  I just love my Berrocals! 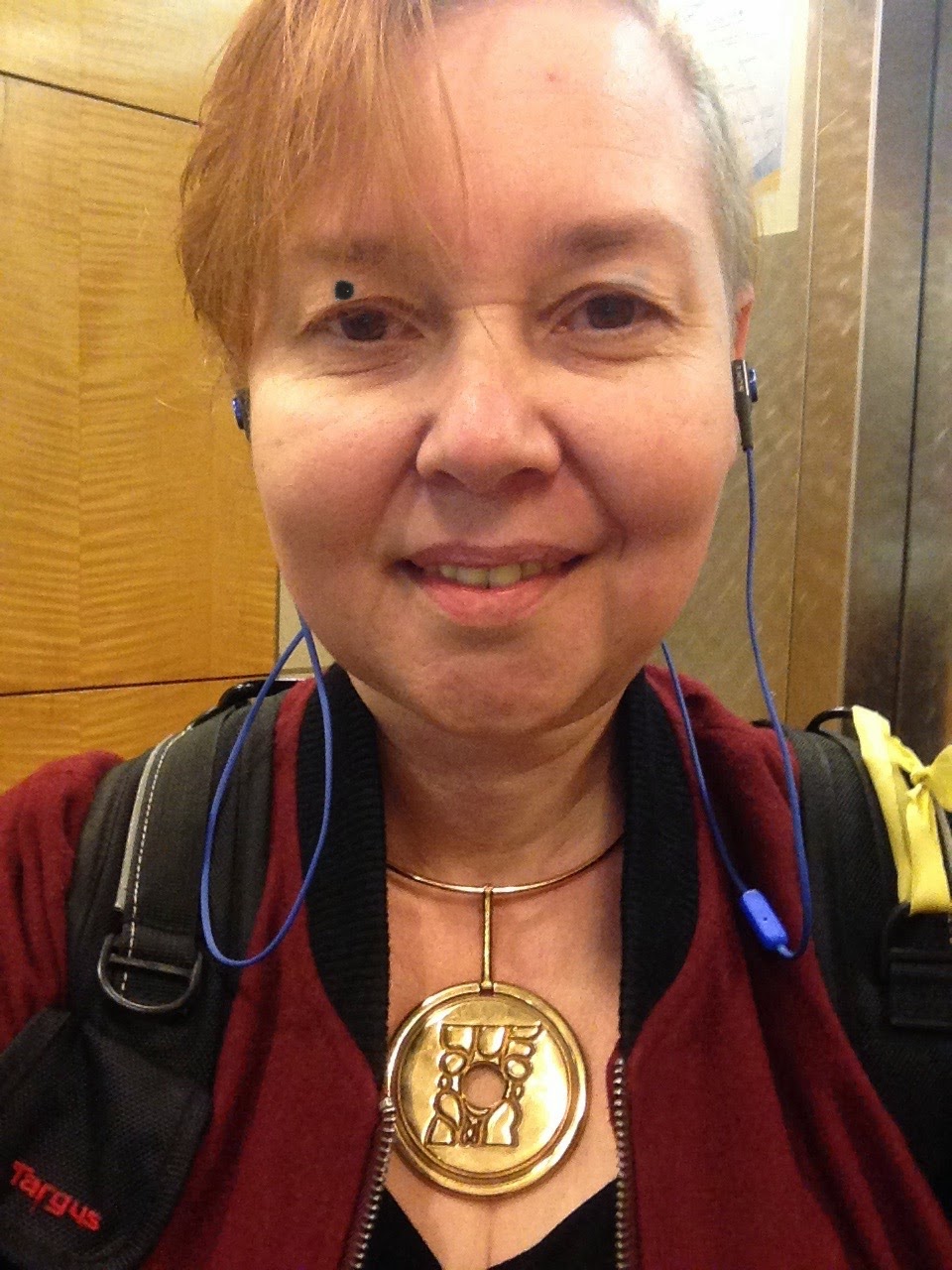 As a final treat, thanks to Oli, I've put together a video of the puzzle being put together. It's a bit shaky, and I warn you, it's long!  Enjoy.

I hope the Easter bunny was good to one and all. Happy Easter! 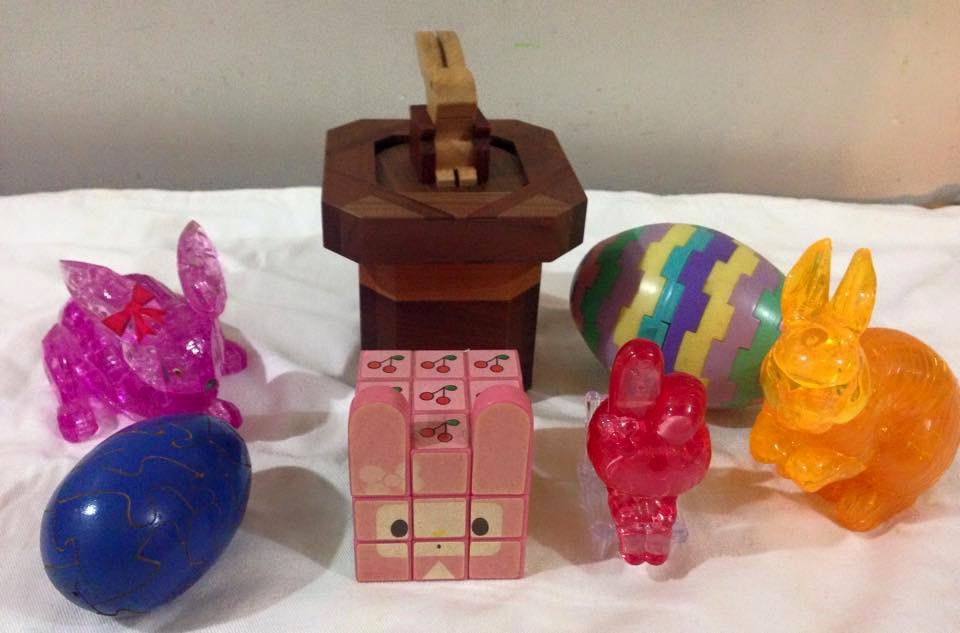 Posted by Roxanne Miller at 11:13 AM No comments: