After my return from DCD, I managed to get in a bit of puzzling before the holiday season. 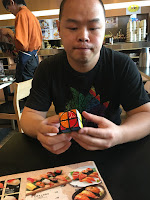 On November 1st Otis came over from Beijing and we just had to get together.  Otis managed to put together a meeting with Wai over at his offices.  We got to see some very nifty puzzles that he has on display there along with a few he sells.  As usual, I'm not allowed to post photos.  We had a quick dinner together before he headed back to see his mom and is return to Beijing the next day.  This visit was way too short. 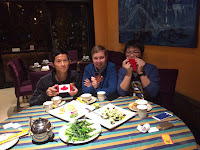 I ended up in GZ for a conference a few weeks back and I simply not o there without seeing the boys.  Ming and AJ and I got together for dinner the night before and had me wonderful laughs in the hotel.  I brought along a few gifts for Ming and he handed over a puzzle or two for me as well.  Thanks for the Lock! Our met. Was very short lived Aisha's three days of conference ahead of me.  But it was not a total loss.  I said goodbye and we agreed to meet for dinner in a weeks time. 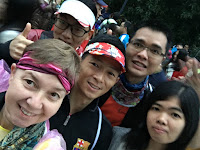 Fast forward to 5 December.  I met AJ at the GZ train station and he took me to my hotel before we ran over to pick up our race numbers.  See, this was the GZ marathon weekend. It was pissing down rain and I was in no mood to do anything but get in a good nights sleep. 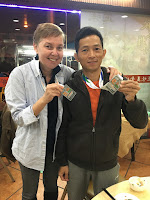 We met again at 6:30 in the morning and ran our respective races.  AJ did the full, and I did the half.  We agreed to meet for dinner that night and ended up going back to home/hotel.  After a few hours sleep, we met Ming and Mr. Wang for dinner and a celebratory beer.  Dinner was altogether too much food and too little puzzling.  I didn't bring any because I had other things in mind.  Ming brought one, and we all had a go at it.  It was an early night though.  Both AJ and I were still tired.  Back to sleep again, and off for HK the next day.

Posted by Roxanne Miller at 5:00 PM No comments:

Again, I've managed to get bogged down with work and life. Puzzling comes later and blogging even later still. But hey, better late than never right?

DCD this year was planned for at IPP. I knew I was going. I knew I wouldn't last until spring before seeing friends again, and I really missed seeing Oskar and José. I've said it before, I don't really collect puzzles.  I collect people. Living half a world away, well...it's hard.  And some friends I only see at DCD so all the more reason to go. 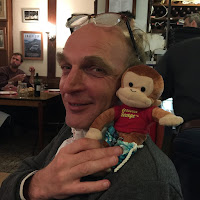 I arrived at the airport  on Wednesday morning, met up with a friend and headed into the city. The room wasn't ready yet so lunch first. Having flown through Charles de Gaul I was exhausted mentally. That has to be the worlds worst airport.  (And to think I need to use it again in a few years time is enough to make me want to curl up in a ball and cry.)

After a nice evening rest, I got up and wandered around the city for a while before meeting up with Oskar, José, and Guido for dinner.  George Miller was there for DCD and brought along some lovely wine.  All in all, it was a very lovely evening.  Good wine, good food, and even better company.

Friday morning we took the train down to Eindhoven to visit the TNO offices there. Such a cool place! Sadly, everything is top secret and I can't post photos 😔 But I can say, we saw 3D printers a plenty.  They were making tiny little prints and food too! It was an eye opening experience for me.  From there we visited with Oskar's mother for dinner and went back to his house for a bit of chat before going to sleep. 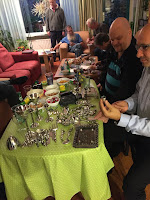 I received a very wonderful gift this year from Oskar and Jeff Bell. They know the way to my heart! These boys gave me a ring.  Such wonderful friends.  I now have three by this duo and highly recommend them.

Saturday was great because once again Oskar opened his house to not only me, but other puzzlers as well.  He had a bunch of people over for an evening of puzzling.  First however, we went out for some marketing.  After returning to Oskar's, I decided a run was in order and went out for a nice jog around a beautiful neighborhood.  I'm very pleased with myself.  I didn't get lost and I didn't fall in any canals.  After my shower, guests started arriving, and one of the first was Laurie.  Now I was especially pleased to see him this year because he brought along my coffinetta! I bought it in February and had waited a very long time to get it.  I'm cheap. 😂😂 I didn't want to pay shipping home. It's very heavy.

Within an hour, many other guests had arrived and we all sat down to puzzle and talk.  The night was wonderful fun with friends aplenty.  The perfect way to spend an evening!  I jumped on Andreas when I saw him as per our customary greeting.  This year Konrad came along and it was wonderful to see him again.  The Berrocal was taken apart as were many of Oskar's puzzles.  Others were twisted, and some were packed.  After a few hours Oskar ordered pizza and now we munched and puzzled.  I hope I didn't get any oil on the puzzles.  I'm afraid I was a bit rude and went to bed without saying good-night to all.  Exhaustion and jet-lag caught up to me. 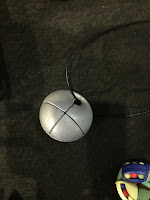 The next morning saw us rising early to head over to DCD. My reason for this trip.  I love this puzzle party almost as much as I do IPP.  Friends from afar that I don't often see gather here.  Saying hello again to friends I haven't seen since August.  And of course puzzles!

I spent a great deal of time speaking with Tony Fisher again, and even bought a nice little puzzle from him that I can wear.  Hendrik brought me a few puzzles I had pre-ordered, and I managed to share a beer with him in the afternoon.  I didn't purchase many puzzles this year.  My collection is getting rather large and needs trimming down as it is. 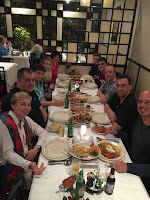 In the afternoon, the talks were held, and I listened to Steve talk about designing and prototyping and producing a number of puzzles.  George talked about the cubigami series, and yours truly talked about the joys of visiting factories in Asia. After the talks it was more visiting with friends before heading off to dinner with a group of puzzlers.

Chinese-oh the irony-and you can only imagine the look on the face of the girl at the counter when I asked for bathroom directions in Cantonese.  But hey, it's all part of the fun.  After dinner we returned to Oskar's for a bit more chat before turning in for the evening.

The next morning I headed to the train to go up north for a bit of golf before heading home. All in all, it was anther great DCD.  And no, I can't wait for the next one. And thank you again to all who made this a special trip for me.  I love each and every one of you.
Posted by Roxanne Miller at 8:43 PM 1 comment: