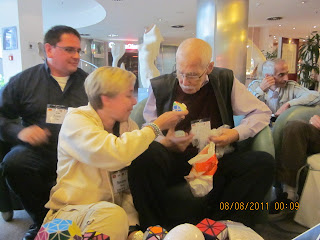 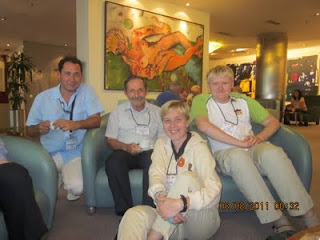 Wow is all I can say. I really dropped the ball on these posts this year, but will attempt to make up for it now.

At the exchange, there were a number of different puzzles out. One nice variation on the bandaged cube, a nifty couple by Bram, Sheridan's is always a hit. I don't even know where to begin with all those. I brought 5 on the plane with me to work on the way home, but only managed to open one. Dead doesn't even begin to describe how I feel.

For those of you who have never been to an exchange, it works like this: each participant brings 100 puzzles along to swap out with someone else. When you make the exchange, you describe the object of your puzzle to your current exchange partner-wash rinse repeat 100 times over and there you have spent the past 6 hours in the most enjoyable way. This was my first exchange, and I have to say, I was overwhelmed. I feel like such a dolt amongst these people. Maybe given a few more years of it I'll know what I'm doing.

After the exchange were 3 lectures. One was on puzzle locks, one on burr tools, and one on smart games. I enjoyed them from the back row, and caught up on TP posts at the same time. (They did loose me a bit in the middle there!)

Once this was finished, it was time to make a tribute cube with Oskar. Now I was nominated chief heckler and think I managed ok. David Litwin, bless his cotton socks, helped me to put my dino cube together. He and TomZ were both great helpers all round. 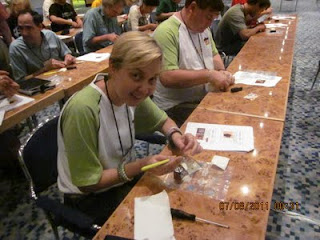 The banquet was held that evening, and you can find a few photos of the entertainment as well as a video linked on my YouTube channel

Sunday was the last official day of IPP and it was the best for getting puzzles. This years puzzle party I didn't purchase nearly as many as I did last year. But I did bring home a few mazes, a few Russian puzzles, a few other toys I'd been looking for. I have no idea how many I got, and will end up counting later on. I did walk out with 2 bags full though....probably 30+

More lectures followed, but David and I both realized that there is a TP member who lives in Berlin so we invited her over to see a few toys. I skipped the lectures and went to an impromptu meet up instead. It was great fun, and I've got to brag a bit about those who were there. Indulge me please!

That evening was the awards dinner and Once again Panda's team of puzzle builders got an honorable mention! I was very pleased that Panda let me use this for my exchange puzzle!

Leaving this time was not quite as hard as last year. We all took off in different directions at different times.
Monday saw some of us on a trip to Potsdam, Tuesday I went geo caching with Pavel, Wednesday I left for HK.

Now for the really exciting bit: Which TP member was caught in a dress???? Follow the posts on Twisty Puzzles to find out! And no, it isn't the first photo up there! That wouldn't be any fun now would it?

Posted by Roxanne Miller at 8:32 AM No comments:

I was so excited about going to the puzzle party last night that I totally forgot to post. The puzzle exchange netted 95 new toys. It is a truly amazing time. I got to see a bit of it last year as pandas exchange partner, but it is so much better from this side of the table. My exchange partner was here for the first time and I hope to see her well enough to have h in the next one.

I'm off and running again, but hope to post a real post tonight.
Posted by Roxanne Miller at 2:00 AM No comments:

Email ThisBlogThis!Share to TwitterShare to FacebookShare to Pinterest
Labels: IPP31 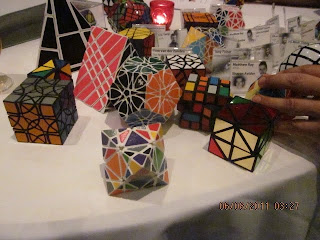 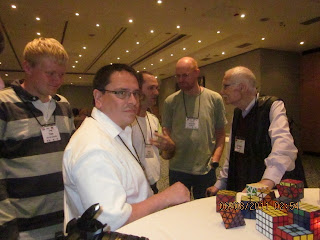 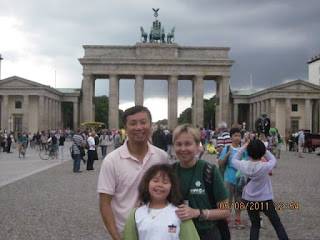 Yesterday was one of relaxation. Well, sort of. NOT! How can it? this is IPP and it's supposed to be exciting.

The morning started out with breakfast at 9:30 with Dave and Tom. Klara joined us for a bit, and after finishing we went off in search of some sights that hadn't been seen in many many years. I wanted to show the bug Check Point Charlie and the museum there and all thought it would be a great idea to spend the day walking around together.

The museum was eclectic. A mix of everything, and a bit odd for my taste truth be told. Bug got spooked a few times, so we didn't stay all that long. Next stop? Alexander Platz. Both Dave and I had been here in our wild young days (don't listen to him when he says he dull and boring :) )

The radio tower is still tall, and that is all one can say about that. We had lunch in the square, then took a walk around the area for a bit. After filling our tums, we headed out in search of toys!
We found a little shop after much running around, and had a peak inside. Dave pointed the puzzle corner out to us, and I dove right in and grabbed a packing puzzle. Asparagus! Unbelievable. I've been hunting for years and found it in Berlin. Happy girl! Klara got a violin, and I picked up a few other toys. Not much of a haul, but great company. Next stop, back to the hotel to drop off some things, and then Tom, David, bug, Matt and I decided to head over to Brandenburg gate. Again, Dave and I saw it before but I wanted the bug to see it and they humored me.

Dave remembered a giant gold ball in the middle of the city which later turned out to be a statue so we headed out in search of that as well. As it turns out, it was right down the road from us. Well, not exactly- a few miles I would guess. Ah well, we're all fit.

Sight seeing done. On to founders reception. interesting. High tables, no chairs. finger sandwiches. Ok, I've seen that on tv. Been there, done that, did not buy the t-shirt (boo for the bad lines) and do not like it. But then who comes for the food. It's the company that is worth while. And company there was. 2 hours of standing around talking, and playing with toys. Tom pulled out his as did Frank and the next thing we knew, there was a table full of twisty puzzles.

Bug was thrilled by the magic of Mark, and Laurie told her she had more instore for her this evening. She's happy.

One of the highlights of the evening was meeting Christoph Bandelow. Greetings were sent all around, and I know Dave was very pleased.

After a few of us went to have some food. A bit of talking in the lobby, and I hit the bar with the big boys. Poor little bug had a nightmare and needed mama, so at 1 I had to call it a night.

Today is the exchange and I really need to get some food in my tum! More photos later.
Posted by Roxanne Miller at 12:32 AM No comments: 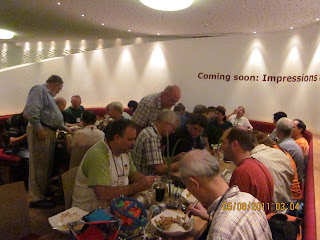 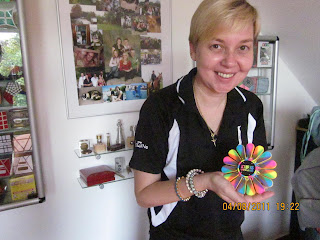 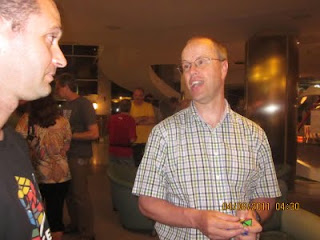 After what seemed like the plane ride that would never end (bug told me we were awake for 23 hours when my head finally hit the pillow.) we finally finally finally arrived at our destination. For anyone who ever goes to Europe, a word of advice-don't transit through Charles De'Gaul. I was told it was a disaster and should have listened. One hour 3o minutes time-normally that would have been wiggle room. Not so here! Just barely had time to get onto a dinky little plane, then they left us sitting for 20 minutes because of traffic. No problem, but at least pass the booze. :)

Never mind! I'm here! I'm here! I'm here! The first night saw me sitting in the lobby for about 3 hours saying hello to a few old friends. Bug and Matt went up and slept while I attempted to find a cure for puzzle lust, jet lag, too little food...you get the idea. I gave up chat, and prayed for sleep at 11 pm.

Upon waking up, I took a jog down FreidrichStrasse (yes, I know it's spelled wrong-no, I can't find the write symbol) and finally did something I had been waiting a year to do. Legally cross that border without being detained! :) well, I guess when it no longer exists as a border that's easy to do.

Enough of my silliness, on to puzzles. The next morning saw us heading out to the home of another puzzler. His place! Amazing. When his wife said 'the house is open' I thought, Ok. And....? And is right! Toys Toys Toys. I was impressed. And we all know that is getting harder and harder to do. Hm. A photo perhaps?

Ok, so we spent a day eating, chatting, playing with puzzles. A 2 hour drive later and we made it back to the IPP location. (ok, so everyone knows, but I was asked to be cagey about it. :)

Last night saw us having the 3rd annual TP gathering, which included the usual suspects, but a few others as well-Mark was here as was Geert and his wife, Anthony joined us this year and Klara! We played with loads of toys, ate a bit of food, and generally had a good time.

If I can get the Facebook thing to work in here, photos will be posted today. Fingers crossed.

I'm off to have breakfast, and a walk around the town with Dave and family to see what else has changed...
Posted by Roxanne Miller at 12:57 AM No comments:

Am waiting for the plane now. Can't wait to a get airborne. That means we are closer to our destination. I'll try to keep this going again this year through IPP but can't guarantee it. Will post nightly updates and photos of my highlights as usual.

Here's hoping for an uneventful flight and a great time! Will be thinking of all my friends who are not here and
Posted by Roxanne Miller at 9:24 PM No comments: