I've been waiting to blog about this puzzle for a while.  I didn't think I'd get to it until IPP, but as luck would have it, there was a puzzle day in HK and I found it for sale.  We all know how cheap I am and how much I hate to pay for that shipping!  :)


I first came across this puzzle in Japan back in 2010 when Dmitry Pevnitskiy and  Kirill Grebnev took the Puzzler's Award AND the Jury first prize in the design competition.  I handed over US$100 and placed my name on the waiting list.  I figured I would get it eventually, and in Berlin the following year it was in my hands.  It's a lovely puzzle, and is still available from the designer. 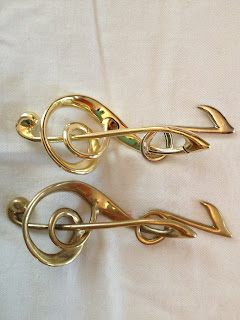 Hanayama released the puzzle this past spring and it's available from shops for a reasonable price.  So what is the difference and which is which?  In the photo above, the Hanayama version is on the top.  It has 2 pieces that have been fused together, unlike the original which is polished so well you can't see the seams.  Other than that, there is no difference.  The puzzles are the same size and weight! (Andreas!)
Hanayama rates these as a level 3 and I'd guess that would be about right.  It's not a difficult puzzle to solve, even I managed it without too much difficulty!
And now, one more photo.  I found another treble clef puzzle I found in one of our local shops.  Now I'm going to go out on a limb and say I don't think this is a copy.  I purchased it after returning to HK from the 2009 IPP.  As you can see, it isn't exactly the same.   Unlike Harmony, this puzzle has an open loop and a ring that needs to come off.  Different enough I would say.  The challenge isn't the same as Harmony, but I would say it's on par as far as difficulty is concerned.  Where it can be purchased from or what it is called, that I don't know. 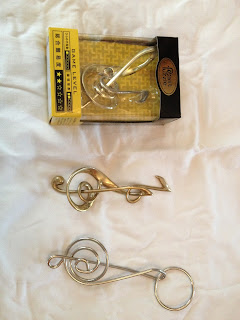 It seems I've been so busy of late that I haven't had much time to blog.  When I do make the time, it's been after a puzzle meet-up and today's post is no different.

My dear friend Otis returned to HK to visit the rather large rubber duckie we have currently stationed in our harbour.  While he was in town, he gave a shout out and asked if Michael and I would like to join him for a puzzle exhibition/talk.  Of course I jumped at the chance to see my old friends and we agreed to meet in the shopping center across from my uni.

I felt very pleased this time around,  it was the first time I was able to lead others to a puzzle location!  Usually I just tag along in a daze wondering when we'll get there and trying hard to not ask.

The day started out with breakfast at McDonald's/food court.  As is typical, we brought along puzzles to play while we ate.  I had the butter churn loaner f  rom Jerry and a few that I'd recently gotten in from various places, and Otis brought along his usual 3x3x3 and an orbik!  Mine is buried so it was nice to see one again.  After we filled our tummies we headed over across the road to the Heung To middle school.  Apparently this is the third year the school has been running this exhibition. 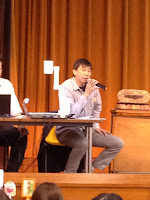 When we arrived, the show had already started.  There was some kind of registration that SmaZ told me to sign.  Seems that since I'm an educator, I got a certificate of some sort for showing up. Ok.  More for the end-of-year-self-criticism.  Although I think it is just another of these EDB training initiatives....

Otis told me in advance there was a Hanayama designer and inventor giving some sort of talk on puzzles.  All he knew was the guys name was Wong.  He was betting on someone being brought in from Japan, I was guessing it was Kyoo.  One point for Rox!  He gave a nice talk on the history of IPP and some of the things that happen inside the mysterious rooms.  Then he went on to discuss a few puzzles he invented that could be used in educational environments.  Overall, it was quite interesting to listen to.

Once the talk was over, we went and looked at a few of the puzzles that were on display.  There were more than a few that I don't have, and really enjoyed playing with them.  It was nice because I had a chance to play with a few and that helped me decide which ones not to purchase. We wandered around for around an hour looking at these, and listening to the owners tell us where they purchased the puzzles and at what cost-talk about making a girl feel jealous!  It seems I'm not the only puzzle hunter in HK.

Otis mentioned something about a sale on Hanayama puzzles and went running over to the sales table and made a few purchases of puzzles needed and puzzles to give away.  In the mean time Katherine came over and hugged Otis, Michael, and Kyoo.  Which was a good thing, because once that happened, was handed a few Hanayama's that I don't have, and was allowed to solve for a while.  As always, no photos and no hints on what is up and coming, but I think you'll enjoy the next two or three to hit the market. 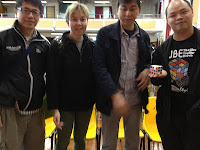 Kyoo very nicely gave Katherine two puzzle kits that we will attempt to put together when I get over this sickness that she's brought home.  Just looking at them, I think when they are done they will be a packing puzzle.  But the real puzzle is to work out how to make them.  You see, there are no instructions inside.

The day started for us around 10:30, and by lunch we took a walk over to the University to grab a go box.  Lunch was in one of the classrooms and Katherine got a real eye opener on the difference between her overpriced international school and the local version of the same grade. 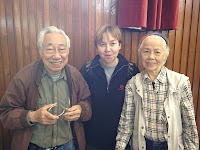 After lunch we went back into the hall to play with puzzles!  There were around 10 or so tables with puzzles on them to play.  Silly me didn't count!  I was tickled because I saw a few more people I know from years gone.   One teacher showed me how to solve cast rattle-which Otis was able to solve, but yet again I couldn't. I also met an older puzzler from whom I ordered a puzzling necklace which I hope to get in time for IPP. 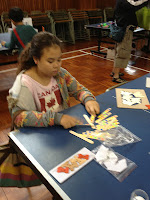 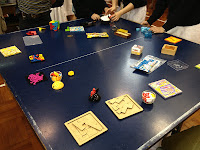 We spent the next 4 hours or so just moving from one table to another playing with puzzle after puzzle.  It was a real treat for me because there were so many students there puzzling!  And better still, as one group left, another came in.  There were kids from primary school all the way through form 4.  (7-16 years old)  I enjoy watching children puzzle away.  Even my own self-proclaimed puzzle hater got in on the action and played for a while.  Sadly she was ill so I had to take her to the train and send her home early. 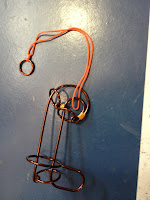 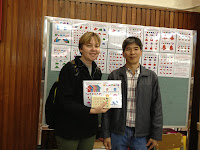 As always when this happens, I was thrilled when I was handed a couple of puzzle gifts.  The first was a disentanglement designed by one of the students from the school.  The second was a new take on an old puzzle:  Tangrams!

When day was done, SmaZ, Otis and I all went out for a nice sushi dinner.  Otis solved a puzzle I was given (again, not showing them yet!)  And then solved another!  All in all, even though it was an incredibly long day (12 hours!) it was great fun.  I look forward to next years puzzle display.

Posted by Roxanne Miller at 11:04 PM No comments: