Ive been remiss as of late.  Studies, and work, and travel have all managed to stop me from posting up about what I've been playing with.  But now I'm on pj days, reading for my degree and the travels have stopped til February so Ill make up for lost posts over the coming months I hope.

I start out today with a few metal puzzles I picked up in Beijing.  When I was there for the Gathering for Gardner I picked up a boatload of toys.  I'm only now getting around to opening them. 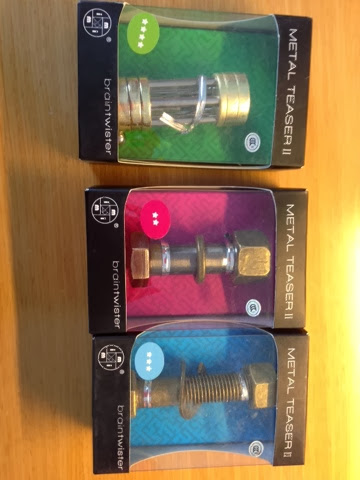 First up is a trick bolt. 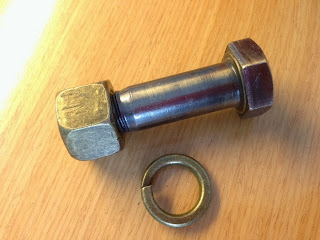 This one looks like it just unscrews.  The object of course is to remove the washer.  It looks pretty straight forward, but as with any puzzle, there is a trick to this.  I have another copy of this puzzle that I bought from puzzle master, and to be honest, this version is better.  Mostly because I have small hands without a lot of strength and my puzzlemaster version was stuck tight.  No real fault of the puzzle.

Next up, yet another bolt. 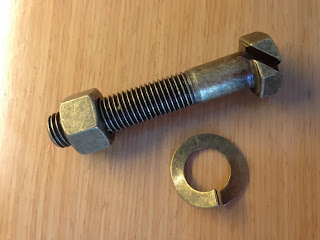 This one is pretty cool because there are some grooves cut into the head of the bolt.  The first instinct is to twist the washer down into those grooves, and like any good puzzle, this is very much a red herring.  Of course that isn't the solution. What kind of puzzle would it be if that were all there is to it?  I can't tell you much without giving away the solution for it, so I'll just leave off saying it shouldn't take more than a minute to solve.... 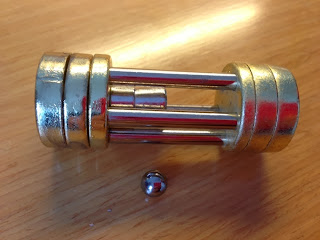 Is one I have hunted for years so I'm glad it has been remade.  This one is called jailbreak and the object is to remove that ball bearing. I'm disappointed.  The quality of this one isn't great.  When I opened the packaging, the puzzle was already solved.  That lead me to believe it was a dog puzzle.  Upon closer inspection I was able to easily see where the first move had to be.  As you can tell from the photo, the second step is easily recognizable as well.  The trick to this puzzle is simply lining up the bits.  Other than that, it's not much of a puzzle.  But I'm glad I was able to add it to my collection.

It feels good to be back.  Later in the week I'll have more. See you then.

Posted by Roxanne Miller at 9:52 PM No comments: