If you could have any puzzle, old or new, what would it be?

I ask because George and I have many puzzling discussions and I am continuously trying to find new puzzle gifts for him.  His answer to my question? He wants nothing more than to own every puzzle in the world.  This of course would be an impossibility. How would one ever find them, and where would you store them.  Even our large house is not large enough. 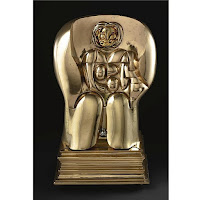 When faced with this dilemma, he said he wants to own the largest collection of puzzles in the world.  Again, even our large house is not large enough.  Ok.  we have the space, but then the puzzles would not all be on display as they are now.  This would sadden us both. No small part of our attraction to each other is our love of puzzles.  We made a 'sacred' vow that ALL of our puzzles would be display and play.

Now back to my question.  If you could have any puzzle, old or new, what would it be?  For me, that would have to be the Cleopatra jewelry box by Berrocal (Opus 106).
I have run across one, but at the time the price of 20,000 Euros was too steep.  No. That still stands, the price is just too much.  Or perhaps it would be La Via de Colombo by Franco Rocco. 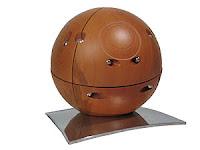 Another puzzle I had the opportunity to play with, but have never seen for sale. These two puzzles would be my holy grail.  I have gone big time into the more expensive puzzles as you can see.  A few others I would love would be an original Dino Cube, or an original Jugo Flower.
Of course, I've been looking forever for a Zaku 2x2x2 Rubik's cube, but I don't see that happening any time soon either.  These are the Holy Grails of puzzles for me.

Which brings me to the idea of Unicorns.  I have only recently learned this phrase and I rather like it.  Mine has been Hoplita.  Since I first started collecting Berrocal's I've wanted this piece.  I finally managed to acquire it this past year. We have taken it apart just once when Carl Hoff visited us.  George spent the afternoon reassembling it while I reassembled Coffinetta. So my next question is, when I get one of my Holy grail puzzles, does it become a Unicorn?

As for George?  He still tells me he wants all the puzzles in the world.  I think he just likes to play.