This is an odd situation we are in now. We have a sea day, a day in Spain, and then another sea day.

On our first sea day we did nothing exciting in the morning.  We rested, watched some news, did a few puzzles.  The usual sea day activities.   But then, we got a call from a good friend and it turns out that COVID has raised its ugly head once again.  Our once squeaky clean and very safe ship (zero cases for 123 days) has now got an outbreak.  Because our friend called us, we decided to err on the side of caution and wear a mask again even though they are no longer required.

We did some quick math and realized that it is most likely that we don’t have Covid, but to be certain, we decided to go get tested.  Sadly, we had to wait until 5 when the clinic opened again.

In the interim, we played a game of cards with friends as usual and opted to wear a mask.  Safety first, right. We explained that we may have been exposed, but our friends wanted to play anyway.  It was fun as always.

At 5 we went down and were tested.  They told us they would call with the results in 15 minutes.  An hour later, I called them.  Negative as expected.  We have been being super cautious on land, and while we may have been in close contact with one who has COVID, the doors were always open with a light breeze which may have helped. Thankfully, his wife tested negative.  For anyone who cares, as of today we have now had 14 negative COVID tests.  Here's hoping the next 4 are also negative.

That night we had dinner with the ATW host and hostess and were thrilled to hear that their son has had his play "Six" nominated for 8 Tony awards!  How wonderful for him.  I hope the show wins at least one.  We are in London on the 19th and if we can get tickets, I’d love to go see it.  It sounds like a great play.

When we arrived, we went out on our scooters in search of puzzles. I had marked 2 puzzle shops to go to and we weren’t disappointed.  We purchased 3 puzzles on this day. 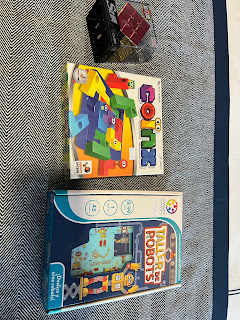 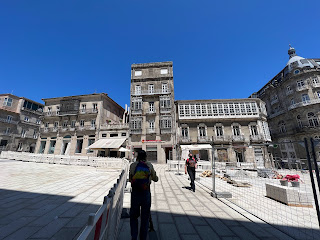 From there we decided to go get some lunch.  We stopped by a local place on the square and had croquettes and a squid sandwich. Honest, that is what they told us this was. 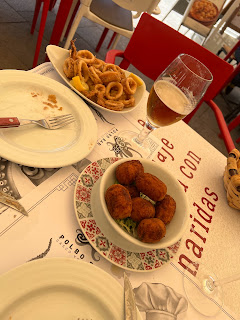 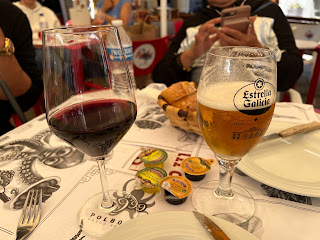 While we were eating, I looked over and saw a seagull jump on a table and steal a slice of bread. 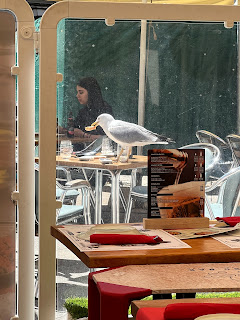 A funny thing happened then, George got up to go to the bathroom and a pigeon jumped on the table across from me. The next thing I knew, it swooped in and grabbed a piece of his squid!  Everyone around had a good laugh as the birds worked out that they didn’t get bread. It was fun to watch them toss the squid around trying to get the breading off. 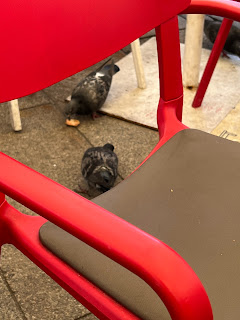 While there we were also entertained by a guitar player and an accordionist. 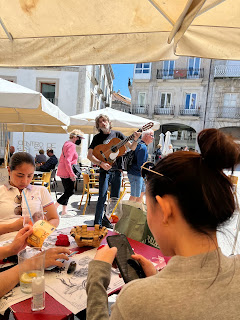 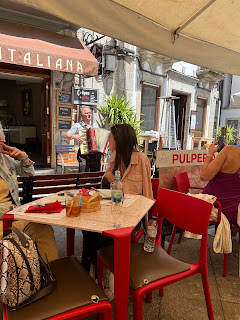 After we left we wandered around the town in search of milk, but sadly there were no shops opened so that was a bust.

We headed back to the ship to have dinner with the future cruise consultant Cella, and the wife of the friend who managed to catch COVID.  They moved her to a different room as she had tested negative.  It was a lovely evening filled with great conversation. We also learned that there were 29 cases of COVID on the ship. Yep. Mini-outbreak.  For those who actually keep up with this blog, that is over 10% of the passengers!  I think they should just make all of us submit to a test and get it done with. This might help stop the spread.

After dinner we went down to the lounge to watch Cole perform in his first solo show.  It was very good. I enjoyed his singing very much until he sang the last song. That simply didn’t work for me and George was tired so we opted to leave. 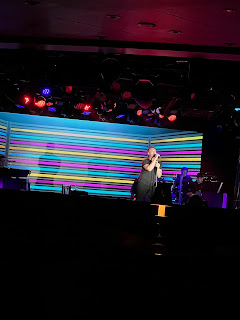 My impression of Vigo can all be summed up in this one butt ugly statue that the local guide was very proud of.  I’m not sure what it is, man? Fish? Bird? After we took a few photos of it George said "Ve go"  A bit later with his same droll humor he said "ve go no more".  If you are here, great, take a look around.  If not, don’t go out of your way to come here.  It’s not a charming city.  But the food was good.  I'm certain the allure of the place is its proximity to Santiago de Compostela. I heard there were great tours going there. 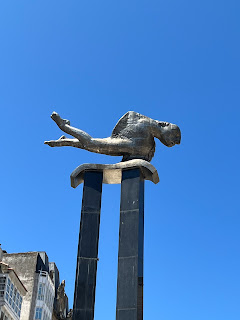 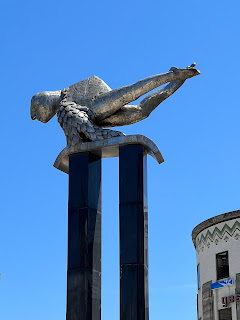 Aside from that, we did see a fountain, a church, a statue of a horse, and a sculpture we have dubbed "falling from grace". 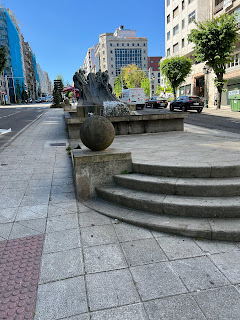 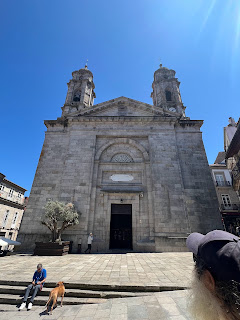 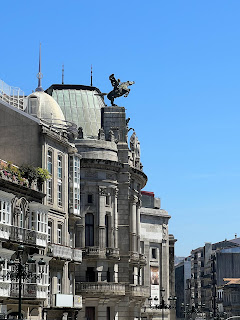 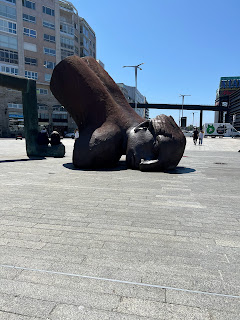 And we finally opened the liqueur from Israel.  It is very smooth. I'd buy it again. 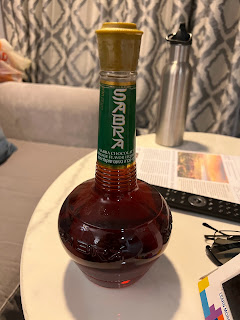 We were rudely awoken by the health clinic telling us we are considered a close contact and must now be tested for 5 days in a row to make sure we are not COVID positive.  Once we came to life we went down and got tested.  The nurse said she would call only if we tested positive.

No phone call until 11!  Then my heart stopped. Which one of us was sick and didn’t know it?  It turned out it was someone from the food and beverage department. I had requested fresh milk instead of UHT milk.  They cannot provide it for me because fresh milk poses a health risk.  So does raw fish but they serve sushi.  Ah well. When we land in Brest tomorrow we are on a milk run.

We had lunch as usual and then retired to our room.  I was supposed to get a massage, but the waves are a bit much for me today and I postponed it.  I sit here typing this with a glass of ginger tea in one hand and a green apple in the other.

The main excitement of the day was bidding on yet another Berrocal auction.  Invaluable has a live auction service and I watched it carefully at 6 pm in the hopes that we would win.  Torso Del General II made in 1964, sold for more than double my bid.  Just a bit higher than I wanted to spend on it.  Oh well, next time. :) Our stock would need to go much higher for me to get into that bidding war. 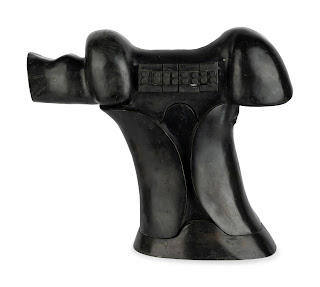 The rest of our day went as usual.  So, until next time Happy Puzzling and Smooth Seas.