I’ve not been updating because I’ve really nothing to say.  It’s been a nice time just relaxing in Italy, but TBH with what little we’ve gotten done, I could do the same in Boca.

But having said that, we have accomplished a lot this past week or so.  Most of which I can’t talk about just yet.  But, we have good news, sort of…We signed the final papers for the castle. I have a copy of the deed in my hands and we are ready to head to Miami in November to apply for that long term visa.  There is bad news though.  The Italian government has the right of first refusal as this is a historic property. The notary has told us that this is never a problem, but it will be mid-November before we fully own the place.  Sadly, we won’t be here to get the keys so our relator will do it for us.  It also means the necessary work on the castle can’t begin until then.

There isn’t a lot of work to do, but the beams all need to be treated for wormwood, new windows need to be installed in the top floor, screens need to be put on all of the windows, we need to replace a boiler and fix the water purifier.  Little things that won’t take too long or cost too much (at least I hope not) but need to wait until we fully own the property.

Did I forget to mention that the current owner doesn’t want internet in the castle so that too must wait.  It’s frustrating for me. We managed to help the kid find, purchase, and move into her home all within 2 week. The bureaucracy here is insane.  80 signatures on the deed. Done by 7 people.  Then each page had to be stamped and the notary had to sign each of those stamps.  Crazy! Yes, that stack of paper is the deed.

From the 9-11th of September was the wine festival here in Panicale.  We managed to see the cheese rolling event on one of the days.  We were signing on the 9th so we missed the real fun but we’ll be here for it next year.  I had a package delivered and since I wasn’t home, the delivery service drops all packages at the local cafe-how small town! We walked over and picked it up, and on the way back home, we overheard some folks talking in the garden below us.  There was a lot of chatter, but the best line I overheard was "I heard it was two men who bough the castle, they paid over a million quid for it (we did not!), and why would they buy a place that big." I leaned over the plant covered garden and replied "because we could".  As cheeky as it sounds, it was a great reply.  We were invited down to the garden, met 3 other expat couples who stay 3 months and go 3 months and had a rather nice glass of wine.

On Sunday our caretakers invited us to their place to eat meat.  That we learned means have a bbq.  They really are lovely people and we enjoyed the day.  After a while the grandmother came out and we were just made to feel like a part of the family.  When we left, I was given a bunch of vegetables from their garden and more herbs than I could possibly use.  It was a wonderful way to spend the Sunday. 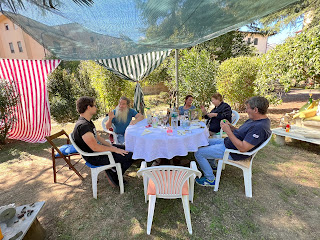 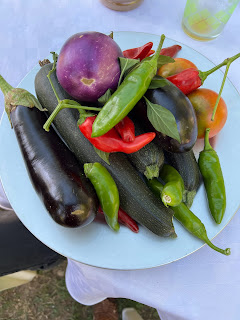 On our return, I had to park a bit of a hike from the castle because of the cheese rolling contest.  We met a couple from Canada who also does the 3 on, 3 off thing and discovered the reason for this: No one wants to apply for the drivers license.  You see, we have to take both the written and practical test AND go to driving school before we can do either.  I’m game and bought a number of books to study while we are back in the USA.  I have one year after we arrive to still use my US license and then I’m grounded so I really need to get cracking.  Did I mention the tests must be taken in Italian? No English versions have been made. 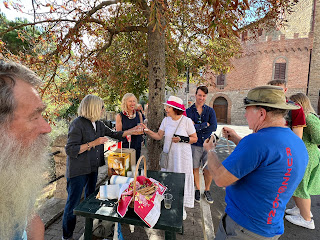 The next week found us very busy with Italian lessons, grocery shopping, and pouring over floor plans to decide how to furnish the rooms and set up the latest version of the museum. Stay tuned one month from now for the big reveal.

Sunday was my birthday so we decided to head to Florence for a weekend away.  There was a tulle festival in Panicale and all vehicles needed to be removed by 7pm on Thursday.  The local police already know our car as I complained about a G-wagon that was blocking the entrance to our garage.  I couldn’t park in the garage because it was being used by the festival.  So instead, I parked overnight in front of it in a no parking zone.  When we woke up, I heard some yelling going on outside and looked through the window to see an older lady talking with the police and pointing towards my car.  I ran outside quickly and in very broken Italian asked for 10 more minutes to get my bag because we were leaving for the weekend.  It worked and I was granted that bit of extra time.  Thankfully, the ladies using our garage also vouched for me and I’m sure that helped.

Our first stop was at Tesla to discuss shipping our car over.  Sadly, we discovered that it will be cheaper to buy a new car than to keep ours.  Looking at the size of the roads, we've decided to downgrade and get a model Y.  It's a just barely for camping. 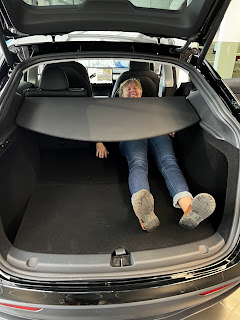 What a trip. I drove the 1 1/2 hour’s we needed to get there only to discover we couldn’t get to the Airbnb.  Florence is one of those old cities that have the ZTL restrictions. We ended up going in circles for a while before I decided that we would park on the other side of the river and walk across.   Florence isn’t that large of a city and our room was less than a block from the Duomo.

Wrong! The parking garage I zoned in on was also in a ZTL.  Great.  I looked for the next one-bust, and the next, and the next. Finally I found a place to park near a grocery store.  It cost €30 per day, not bad.  But when I looked up the address on a map, I’m afraid I might get a ZTL violation ticket.  Here’s hoping I didn’t enter where there was a camera.

We managed to get to our room around 4pm-remember, we left at 7:30! It was a shock, we opened the door and I thought I had the wrong place.  There were 2 unmade sofa beds and dirty towels all over the room.  I shot off a photo to the owner and he assured me it would be cleaned up quickly. Fine.  We dropped our bags and went off in search of a monument or two. 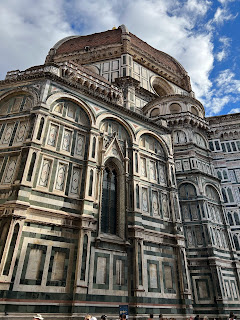 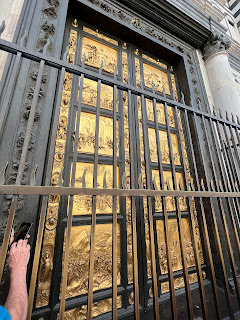 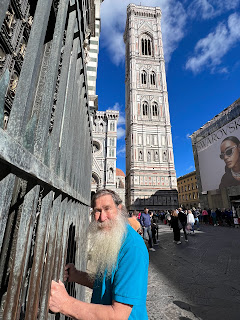 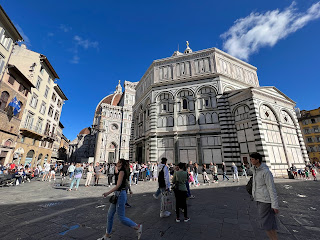 OMG! The line to get in was over 3 blocks long. We passed. We’ve both been before and it wasn’t high on the must-do list.  We wanted over to the Ponte Vecchio to look at the goods on display and commented on the changes we’d seen.  When George was last in Florence (57 years ago) the shops sold leather goods.  It’s always been gold during my visits.  My first being 37 years ago. 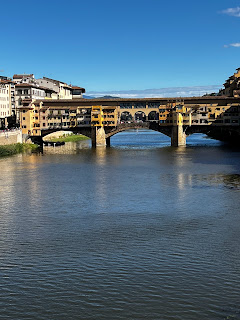 We had returned to the room after a while so George could nap and I could look for the toy stores.

Dinner was nice, but after I had a terrible rash on my midriff.  I’m going gluten free for a few weeks to see if that solves the problem.  I’m afraid I’ve probably eaten too much since coming here.

Sunday we spent walking from one toy store to the next.  We did manage to find a few puzzles that we don’t have, but for the most part it was a bust. The one shop I wanted to go into was closed until 3pm on Monday.  Oh well.

Instead we wandered into the Medici Palace. A place new to both of us.  It was a pleasant wander around until we hit one room. That place was amazing!  The ceiling in my opinion rivals the sistine chapel.  I’d even go so far as to say it is better.  We sat and stared at the ceiling for over an hour until our necks hurt.  We took great pleasure in snapping photos of each scene and zooming in on them to determine the myth being portrayed.  George commented that if one was teaching in there, you could spend an entire year discussing the ceiling and walls and still not be done. 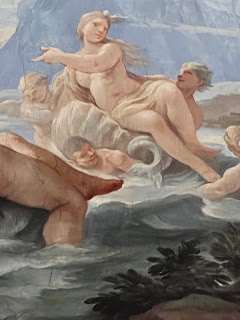 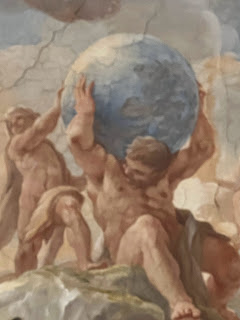 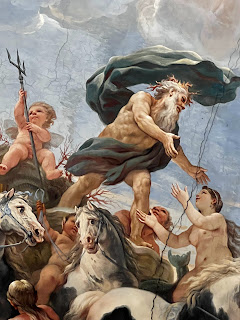 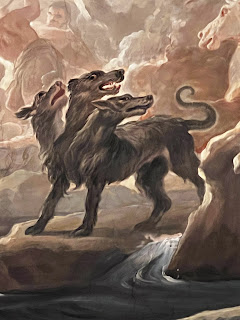 We had another nice evening meal and were seated next to a couple from Arkansas who were chatty.  All in all, it was a nice birthday weekend.  The best part I think though was the next day when we went to Fiesole. 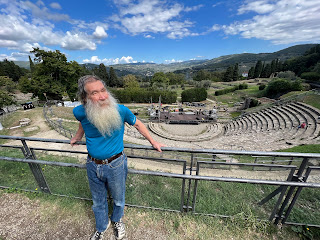 This is a small hilltop town 20 minutes east of Firenze.  The reason for our little side trip is because George performed with the FSU Flying High Circus there in the summer of 64.
I’d have been there with him except I wasn’t born yet :) All joking aside.  It was a wonderful old ruins and we enjoyed walking around it.

I parked at an odd spot and when we returned to the car, I set the gps for home. Oh dear!  The road we traveled back down the hill on was the narrowest 2 lane road I’ve ever been on.  Thankfully we didn’t encounter anyone as we were doing down the hill.  I have no idea what I would have done.  The road was windy and steep as only Italian roads are and I never made it out of 1st gear until we got to the autostrade.

We returned home uneventfully and now await the elevator repair man.  I’m hoping we can send the shaft from the ground floor to the top.  I was told it is possible, but now all we need to do is work out the cost of it.  A two floor elevator is a silly thing to have.  I’d rather they take it out and have more usable space if it can’t be extended.

Next week I’ll have some news. None of this frivolous stuff.  Until then, continua a rompicapo.

Posted by Roxanne Miller at 4:20 AM