It has been a while since I posted. I’ve had good reason.  We returned to Florida, spent the next day opening boxes and putting things away from our trip to Italy.

On Friday that week, we headed to Italy to Miami to apply for our permanent visas.  Typical of Italian bureaucracy, we needed 2 copies of each item because we are after all, 2 people.  This should take 3 months to complete.  Sadly, even though we had all of the forms they request on line, we were still missing documents so home we went to send them back down again.  Even though we were told to send it all via email, two days later we received another email telling us they needed hard copies.  And on it goes…But we still want to move there.

This past week has seen us do nothing but packing of the house.  The guys we have working for us are truly amazing.  It took me 4 days to open and repack the 250 odd packages that came in for us while we were gone. 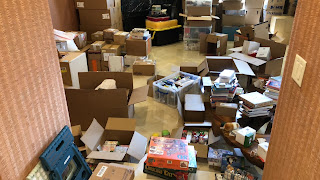 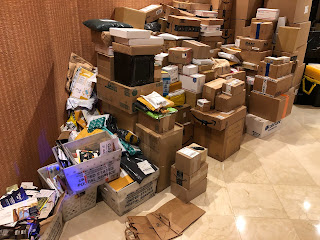 During that time, they wrapped and boxed up my entire office, the garage, and George’s attic workshop.  I feel incompetent.

Our garage now has 14 pallets in it.  They told me so far they have shipped out 58 and we figure there are another 12 or so here to pack.  793 boxes in total have been shipped and all of the crates they assembled already.  Each box has to have a pallet # and a box # on it. This system will help on the other end to make sure we received all that we sent over.  If only I remember to look at the numbers. 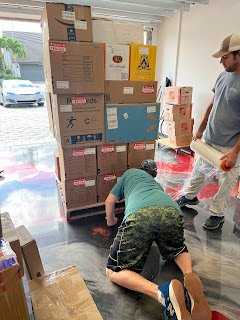 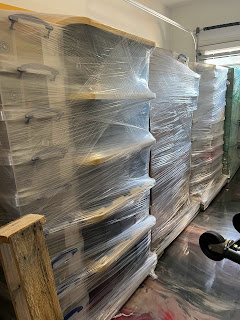 The Lovers, the custom furniture, and the teak root sofas are on their way to Italy. Then the furniture and the extra crates go.  They have a running joke to the effect of "if it isn’t packed yet, throw it in with the sofas".  We have 5 of those heading over.  There are 8 folding tables of over 6’ in length and 2 smaller card table sized tables.  The dining table seats 12 and the guys were kind enough to refinish it before sending it over.  Thankfully they have left it and the chairs for me so I can host Thanksgiving dinner.

George has designed a new soma cube with letters on it.  I’ll not explain more as he is thinking of giving it as an exchange gift coming soon.  He’s also worked on something he calls the clueless crossword. I have supervised and returned to cooking for the lads.  I try to feed them vegetables and some healthy food, but as George says, they only want calories.  He’s right.  Eggplant Parma with garlic bread is on the menu as is some heavily sauced ribs that they like.

The guys have managed to take down most of the Kallax boxes and we donated them to a school.  They were so glad to have them, that the lot was gone in 2 days time. There were over 150 of them given away.  Now it’s plastering and painting time.  The only thing that remains in the museum are the big furniture pieces that need to be crated and 2 sofa beds for the guys to sleep on during the week. 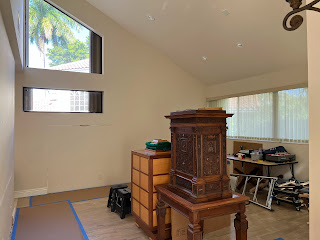 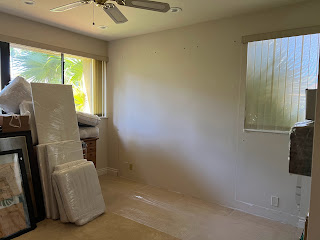 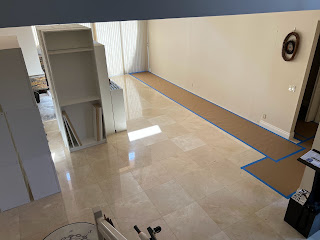 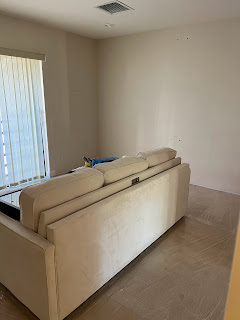 Both houses are all but empty and it is surreal to be here now.  It saddens me to see the emptiness of our home.  The halls echo and the void has never been so empty. there is something unnatural about walking across it and not catching the lovers out of the corner of my eye.  It is but a shell of a home now.  But on to bigger and better(?) things right?!?

I continue to study Italian and have begun to work on the driving book. What a bother that is: the written test is only in Italian, I need to do 8 hours at a driving school, and then I have to pass the driving test.  But if I want to drive….Ah well. I also spend hours pouring over the blueprints and measurements of the castle and the palace (the old hotel-it will truly be a 14th century palace when I’m done with it) designing a new kitchen, bathroom, some closets, oh, and shelves for puzzles. Just over 3 miles of wooden shelves have been ordered.  We will be installing floor to ceiling mirrors in one of the rooms and adding around 1km of glass shelves to house the kaleidoscope of crystal puzzles I have put together.  We have decided to have a rainbow room for Oskar’s puzzles and the Internal walls of a cube for the twisty’s.  The IPP room will have a unique cataloguing system, and I’m working on the placement of a bookshelf door.

There is just so much going on and so much more that needs to be done.  All in good time.

Posted by Roxanne Miller at 6:51 AM