Those things terrify me. I am the only person I know who had to take basic algebra year 1 3 times and still didn't pass the darned class on her own merit. (I still swear that lecturer felt sorry for me. I was moving to Hong Kong after graduation-if I passed algebra that is.) So what do I do then? I go on to be an English teacher via a failed career as a History teacher (oh for the wisdom of the HK government!) And what does that have to do with anything? Well, indulge me a bit if you will.

Round about 1985 or so, my mom gave me a 15 puzzle. I mucked about with it for a while and was never able to solve the thing...only to find out many many years later that it is kind of designed that way. Fast forward to the mid to late 1990's and Rubik's (Then owned by Matchbox) brings out it's version of the 15 puzzle and I couldn't solve that one either. So in a box it went. (I was studying then anyway and when you're young, who has time to play with toys AND study?) Well, round about 2003-2010 my good friend SmaZ makes a modification from a super square 1 puzzle. It's a bunch of circles of varying colors. He later added numbers to it, and by then the numbers had long since stopped bothering me. (something to do with statistics and crying in a class and Johnny Walker...)

So that brings me to today. I still hate the numbers, they still terrify me, but give me data and I'll run the stats on them for you till the cows come home. (Ok, Ok, I know. There are many of you who read the TP forum and probably vaguely remember me crying over how to work the darned numbers-but remember, that was way back in 2008-see, the same time frame) But here's the funny thing. All these years I refused to have anything to do with numbers. I mean, I even hid a poor puzzle away in a box just because it had numbers on it. I mean really, how sad is that? (I wonder if there is a phobia word for 'fear of numbers')

Well here we are folks, it's now almost 2012 and I have overcome my fears, I have conquered my number nemesis! I am ready to play with toys again. And where should I start???

How about with Eric Harshbarger's "Digits in a box" It's a simple concept really. You just put the numbers 0-9 in a box. What could be easier than that? Apparently a lot of things :) My friend Otis from Beijing was back home in HK last year and I brought the puzzle along to a dinner we had. Well, like all good puzzles he mucked it up, and like all good puzzle owners/friends I said don't worry about it, I'll fix it later-here's another one to play with....I really should make one of those 'you mucked it up, you stay over night till you solve it' but I would probably have house guests that get as old as fish, and my husband would have long since left me. 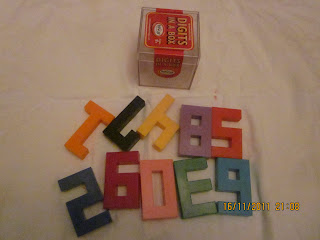 One year on and it's still not solved. It's really a great little puzzle. I like that you can flip the numbers every which way. I bought two sets from Eric when he offered them up and the funny thing is, they are different from each other in the color/number matching. Which is pretty cool because I can't look at the still sealed version and say hey, red goes here and green goes there. It simply won't work. But who would do that anyway.

A couple of other number puzzles I've picked up are "DigiGrams" designed by Martin Watson, and reproduced by many. I got mine from Creative Crafthouse 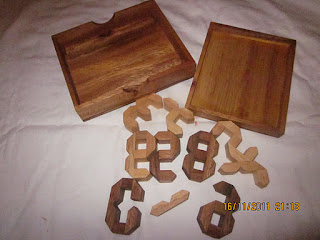 I liked this one, but was a bit tipsy one night and bored out of my mind so I started to play. I think it took me all of three minutes to solve it-and while on video at that! Are you impressed or what? Don't be, when I watch the video, I realized that I left 3 of the pieces in the box. Easy to solve when you do that. But in fairness to myself, I've done it quite a few times before and after that. So the puzzle, I like the design and the price was right at just around US$20 now (I think I got it at a discount though). My only complaint? The wood isn't really smooth. I can feel the grain if that makes any sense at all. Nothing wrong with that, but I'm not used to that feel and would have much preferred a more polished version. Having visited the Hanayama factories, I know how easy it would be to polish the pieces. But then the puzzle is made in the US and labor charges are higher so it's a trade off. 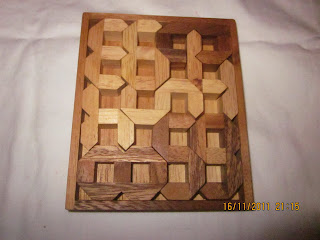 And that brings us to the last of the puzzles. When In Japan in 2010 I had the great pleasure of meeting Bob Hearn of the first person to solve the latch cube fame. He had a puzzle with him that he exchanged at G4G8 and I managed to buy one off him. "Easy Eight, Hard Eight" On the train from Hakone to Osaka, I solved the difficult side. It took me the rest of IPP to solve the easy side, and this was a long IPP-1 week! This puzzle is great fun because you simply (she says) have to put the letters E-I-G-H-T in the square (easy eight) 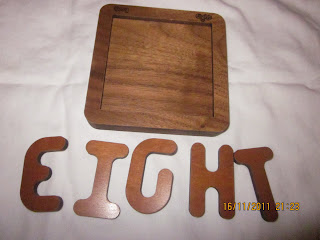 or the oval (hard eight) and leave it to me to solve the hard side first. This is a puzzle I have yet to get tired of. I've taken it out a few times since I got it, and it's still as fun to solve now as it was then. And through all of this puzzling, I have managed to loose my intense fear of numbers. They can be fun. Especially when they are toy! I mean toys are never scary are they?

So this is odd...Rox writing about tray puzzles? What is wrong with her? She must be sick. Nah, These puzzles are all within easy reach. If I mention something that has been written about before, someone please tell me to shut up. I get verbose at the best of times and when I start doing puzzles...well there's no shutting her up.

Tomorrow? I'll go to a twisty. I think I'll start with a few custom made puzzles made by a dear dear cyber friend....

Until then may your cube lube never mold and may your wooden boxes always remain un-humidified.
Posted by Roxanne Miller at 9:34 AM