Wow is all I can say!  I want a better cigar!  Ok, so I bought this box at the last minute.  It was one of those impulse buy type things and I seriously thought I'd not be able to get one. (Thanks Eric for letting me sneak in the back door to get it.) 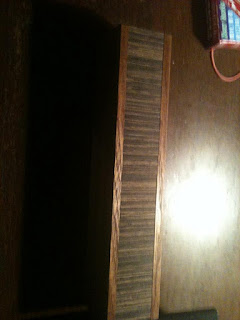 (forgive the lousy photos-iPhone) My understanding is that this is a set of 6. Now since I've purchased the first one, I'll have to order the next 5 won't I?  Well, this one was a surprise for me solving wise.  I was being a smart alec and typing up about peanuts and boxes and such while playing with the puzzle at the same time.  I think it took me less than 2 minutes to solve!  Seriously.  But then that could have been a fluke, so I tried it again and much to my shock (and pleasure I might add) I could do it again. This box is simply brilliant.  It's difficult that a puzzle builder I know handed it back frustrated, and simple enough that my bug has worked out how to open it time and again.  I'd tell you to buy the next ones that come out, but if you do, that means I might not get one.  So do me a favor and wait for me to order mine first. 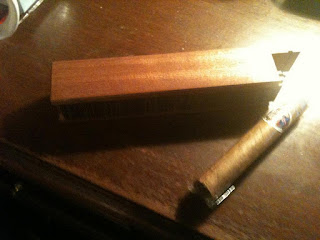 A cigar what else? This is really why I got this puzzle. I wanted another cigar.  Seriously.  No joke. I quit smoking the cigarettes at Easter, but still crave a cigar every now and then.  I figured if one came in my puzzle box I had an excuse to smoke it.  (I couldn't just go out and buy some now could I?  That would be too much like cheating and Mr. Man would be so angry.)  Eric said if we didn't want to fill it with cigars then we should fill it with beef jerky and if we didn't want to fill it with beef jerky we should get a life....or some such nonsense.  Ok, ok. enough nonsense.  I told Eric I was going to smoke the thing and he told me I might want to put it in a humidor first-air travel and all. Well I did just that and picked it up Friday. The man in the whiskey bar says it should be good to go now.  And laughed the whole time telling me to go buy a better one and toss this on to the curb.  Not one to waste anything....well, here's hoping it doesn't poison me.

And next time Eric~put in a little something um....beef jerky like.
Posted by Roxanne Miller at 11:01 AM