I remember when I was a young child hearing a much older person advise me to not take any wooden nickels. Now at the time, I had no idea what this meant, and since all money is made of metal, well it just didn't make any sense to me. Many years later, I saw this puzzle on a website somewhere. It's originally made by Oskar (who else)and was at one point made (out of metal) by bits and pieces. I saw Neil wrote up about it over on his blog Go give it a read. As it turns out, this is one wooden nickel I want to take....

I got lucky and won this on a Baxter auction (Thanks Nick!). The price was pretty, but the puzzle was well worth it.
I got the puzzle in and casually mentioned to my daughter that there was a real buffalo nickel inside. Since she had never seen one before, she set right to taking it apart. I thought she would be at it for quite a while, but par for the course, she being a non-puzzler and self proclaimed hater of all things puzzling....opened it in less than 5 minutes and then proceeded to ask if she could keep the nickel!

This one isn't made out of metal like the one in Neil's post. I think it might be some kind of plywood, but I'm not sure. It was George Miller's IPP exchange one year, and yes! It has a real buffalo nickel inside.

The photos below show the front and back with the bits partially removed. I don't want to be chastized for giving the secret away. Overall, I would say it is a fun little thing to play with. If you happen upon one, I would say to go buy it. I hear tell they are pretty rare.... 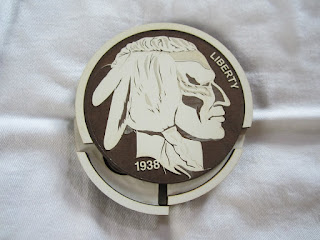 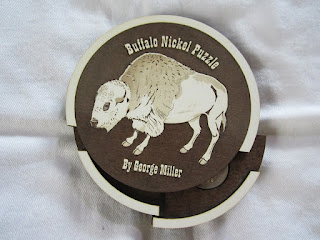