Ok, these are little beasts! Enough said. Post over.

No not me. I could never be that short in any thing I say or write. 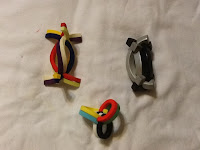 The candy twist one I bought from George Miller a year or so ago and put it in a box. It was. From an IPP lot so that's understandable. Cold fusion was Oskar's exchange puzzle last year and the Arch Burr came from B&P this week. It was metal and I've taken a liking to those lately. I thought as long as it just came in I'd dig out the others and compare them all at once so today it's a three-in-one post.

I started off by taking the usual photos of a completed puzzle so I could look back at what the final state needs to be. Logical right? Then as each piece came out I photographed that as well. Again, logical. And that's where it ends.

After the third piece came out of the Arch Burr it just fell apart. There was no photographing the last disassembly procedures. But hey, I'm half clever so I know I can put it back together.

Well, I thought so anyway. After an hour into my Cougar Town marathon I still didn't have it. When Mr. Man came home I resorted to pulling out the instructions. How unhelpful we're they. An hour later I was ready to throw them across the room. It didn't help by being bitten by the puzzle either. This one has lots of sharp edges in it and I swear I caught every one of them. It is yet again a prime example of a great puzzle made rather shoddily. When will I ever learn? Odds are never. 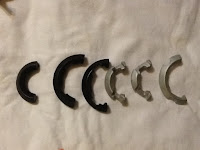 The Arch Burr is made of aluminum and looks pretty cool in black and silver. Sadly though the craftsmanship is lacking a bit on this one as well. The outside is nice and smooth but the internal parts-especially those around the cut out bits are rough cut to say the least. There was no rounding off of those parts and yes, I really did get cut by them. Mr. Man offered to sand them down for me but I passed. I really don't think I'll go playing with it again.

On to the candy twist! This one is made by shape ways and I'd hazard to guess its Oskar's design as well. I'd twisted burr bits to wiggle around. It's been nicely died with six different colors. I did the photo shots with this one as well. Luckily by the time I unraveled this one I had experience with the Arch Burr. With the exception of the twist they are pretty close to the same. Ok maybe not but they were close enough that it didn't take two hours to reassemble. A nice little puzzle if it weren't for the 'scratchiness' that is inherent in shape ways puzzles. It would be a fantastic puzzle.

The Cold Fusion should be renamed a Cold Day. It's a real pain. Disassembly and reassembly. I played with this one through an entire episode to take it apart. And another FOUR to put it back together. If you want a challenge, this is the one out of the three to buy. And you are in luck. It's available from PuzzleMaster.ca.

All in all it was an entertaining evening for me...stupid television and puzzles! Oh and I had a glass of Cloudy Bay so I was truly in seventh heaven.
Posted by Roxanne Miller at 9:22 AM