Day 6 Romping about and day 7 Twisty puzzle meet up

Day 6 saw us arriving late in London.  We had planned to get there in time to join John Haché and Otis Cheng for a trip into the city to do some puzzle hunting, but as it turned out, we got a late start and that lead to a rather late arrival.  I did the best thing I could think of and called Otis and told them to go on ahead without me.

All my life I wanted to go to the Camden Locke puzzle shop and here I missed it.  But by the time I finally write about my last puzzle day, you will see that the puzzle shop wasn't the only thing I missed.

Anyway, the day was uneventful.  Well mostly.  I checked in and Laurie gave me a job to do. I was the first to receive the greenhorn hat.  oh what a responsibility!  I loved it and didn't want to give it up.  Mean old Allard made me though.  I had dinner in the hotel restaurant later in the evening with John and his Dad, Oskar, José, and George and then went on to have drinks in the bar as is normal for Rox.  Hugs all around because, lets face it, this is the first real day of IPP.

Day 7 saw us heading over to the Harry Potter experience and Windsor Castle.  Now, I'm a huge Disney Fan and have never really grown up, but once you've seen one of these things, you've seen them all.  Nope. I did not enjoy it all that much.  The castle was interesting in that I managed to get through it with Bram and Scott, clueless as to their conversation and completely missing the castle :)

OK.  On to the real fun.  That evening was the founders reception.  I ended up on door duty from 7-8, and then spent an hour walking around saying hello to one and all.  More hugs and kisses had to be passed out. 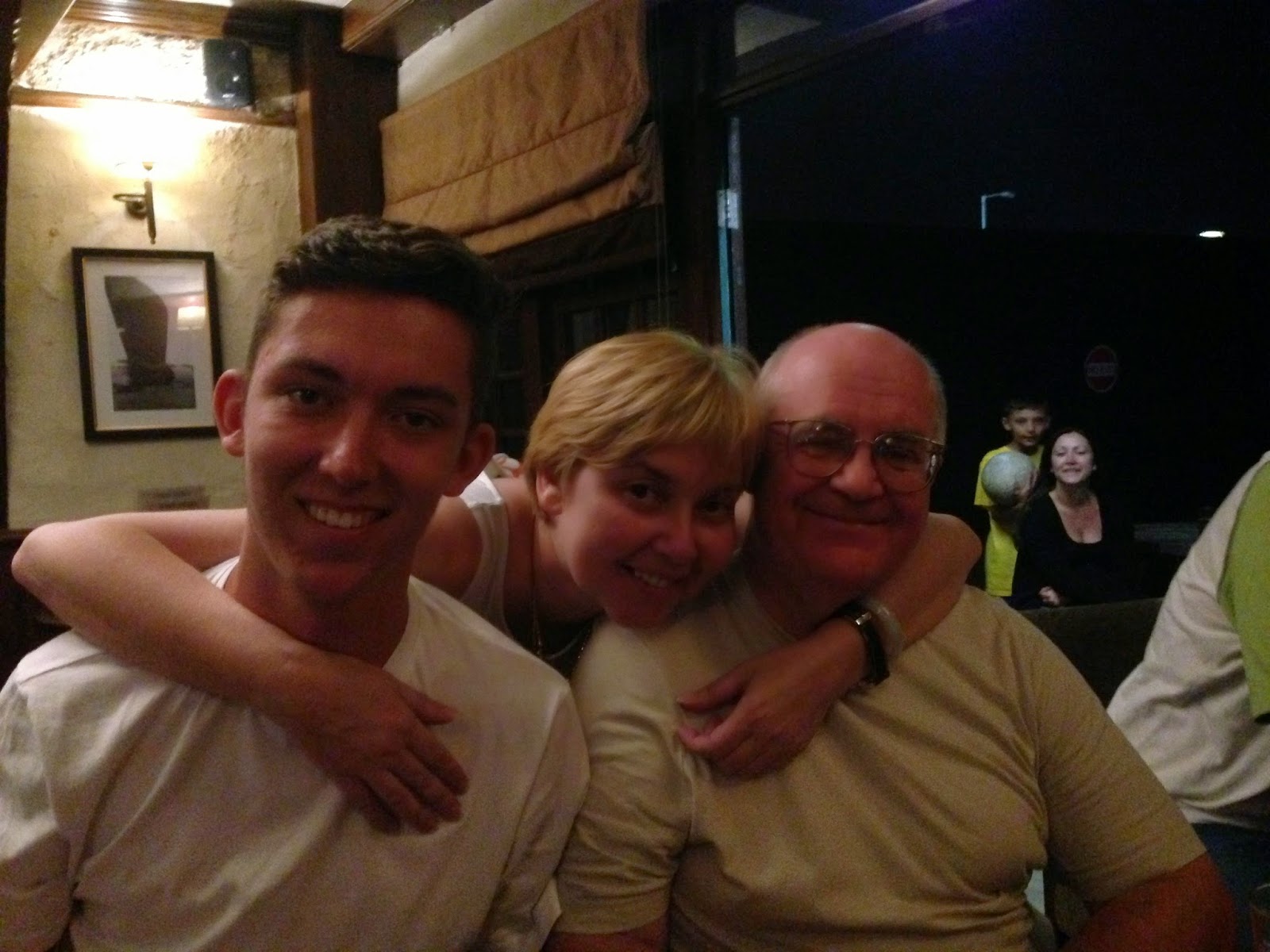 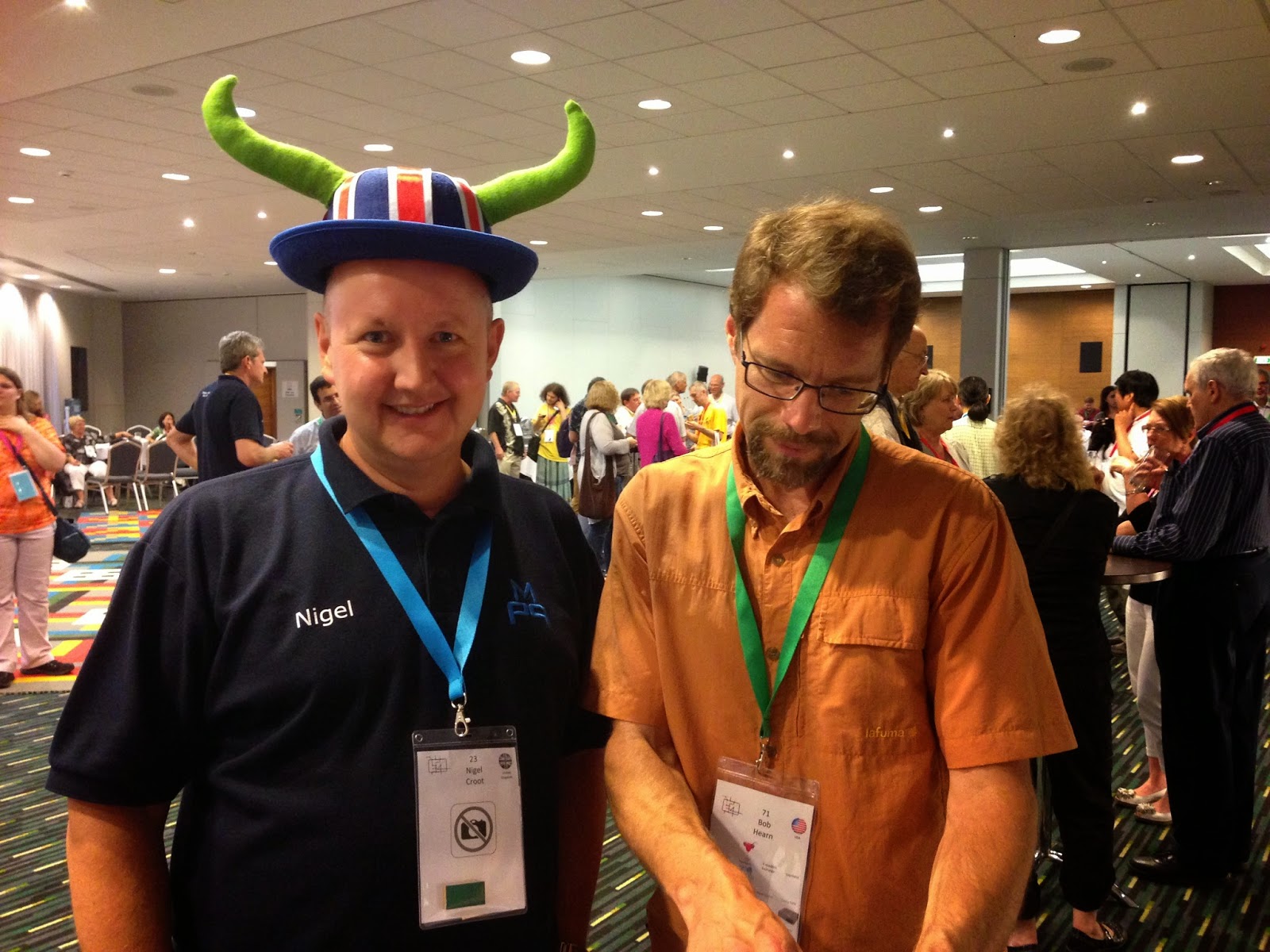 But the real fun came later at the Twisty Puzzle meetup.  We had a big crowd of us as usual.  Gus and Jack met at the pub across the street from the venue before we got there.  Of course they had to get a hug when I came in.
We had some of the usual suspects and puzzled away for a few hours.  Andreas, Hendrik, Bob, Geert, Oskar, Carl, and Jose were all there.  This year we were joined by Otis, John and his dad Marc.
Drinks were bought and we got down to some serious puzzling.  I guess we stayed until we were kicked out of the bar at around mid night.  The party continued for some of us at the hotel bar until the wee hours.  Another great meet up. 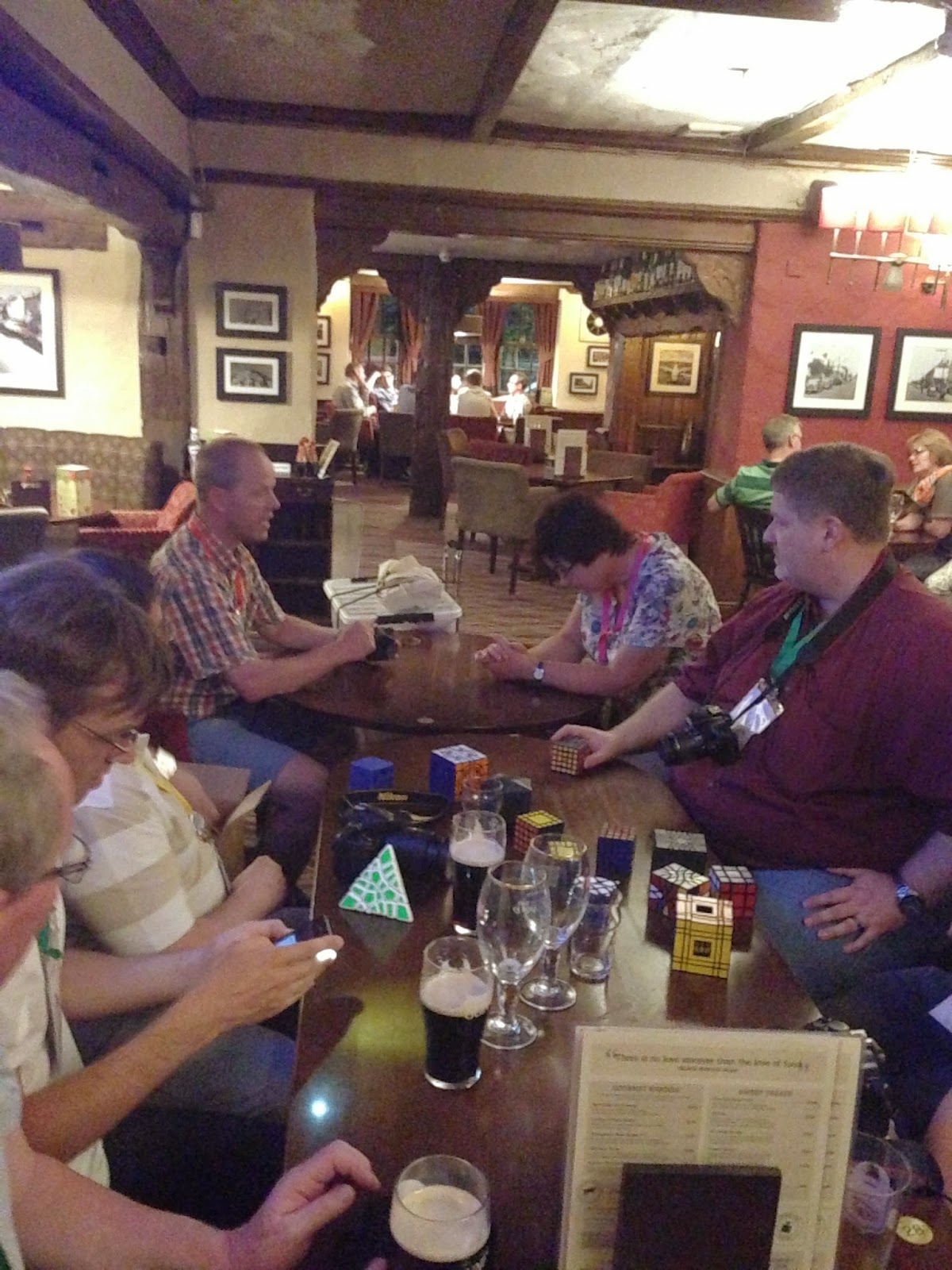 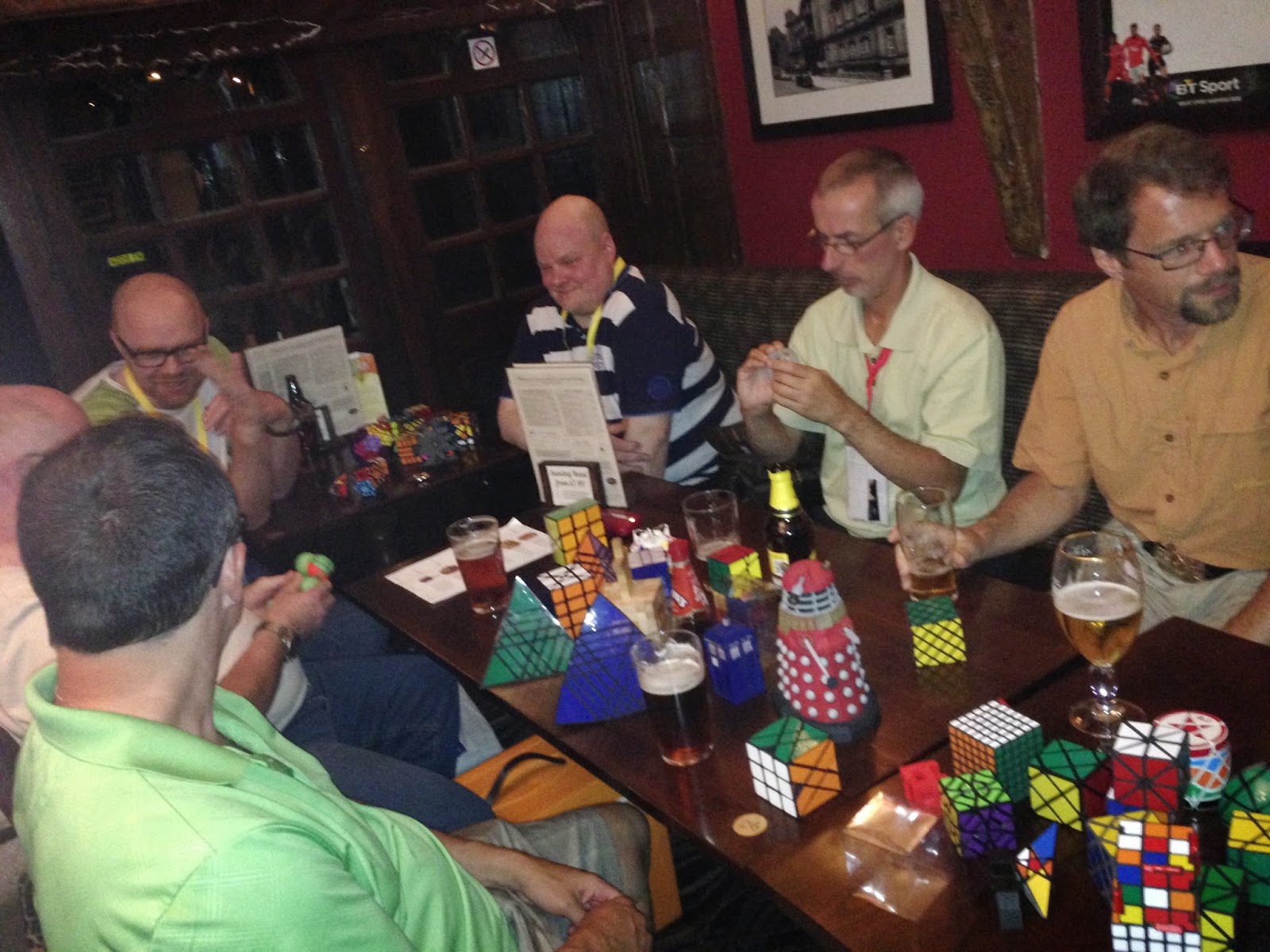 One of the highlights for me?  Taking Bobs belt off and playing with his buckle!  Well done sir!  I'm thrilled that you brought it along for me to see. 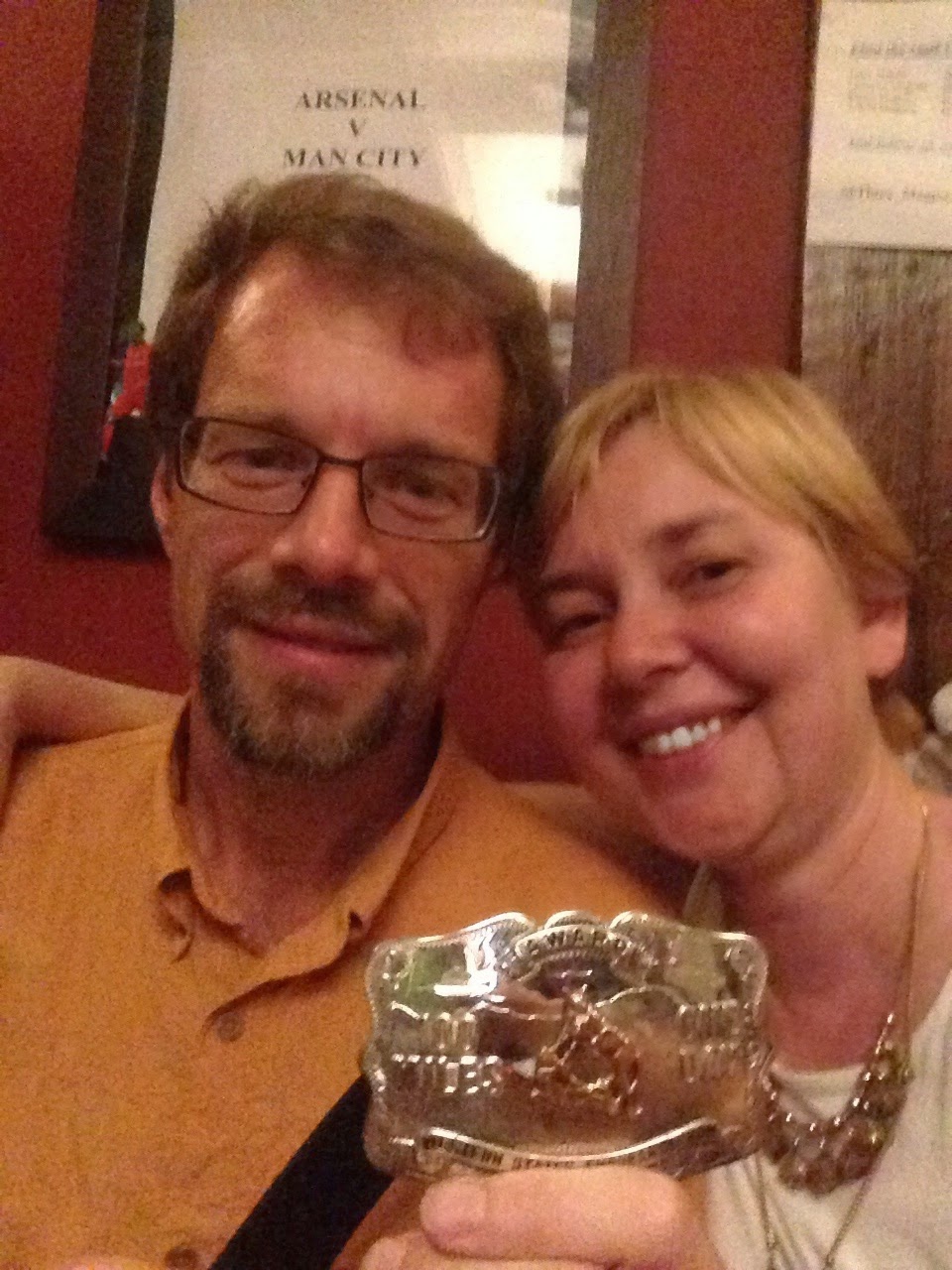 Posted by Roxanne Miller at 8:19 AM