Crossing over to the darkside 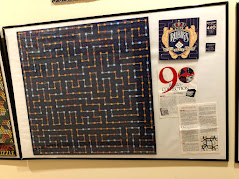 I've had a few Rubik's jigsaw puzzles for a very long time and have just now gotten around to solving them.  The first is the Rubik's Royal Brain Teaser.  Not at all a Rubik's cube, rather a rather poetic use of the name to sell a jigsaw puzzle. It was made by Springbok consisting of 400 pieces. This one has jewels on a rope going around the puzzle.  Challenging?  Not in the least.  But fun to put together anyway.
My next puzzle was the double sided magic. This one was produced by Milton Bradley during the 80's Rubik's craze and at least has some sense of Rubik'sness attached to it.  It has a looped rings magic on one side, and the magic with the rings unlooped on the other.  This one has 300 pieces.  While it has fewer pieces, it was much more challenging than the first because of the number of black pieces.  All black.  No hints there.  And don't let the 'double sided' fool you. It is easy to distinguish the two sides aided by the cutting technology of the 1980's.  You simply feel the difference and go with it. 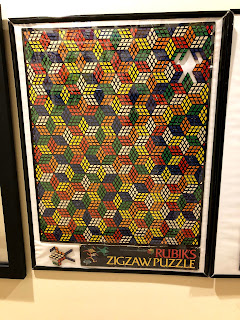 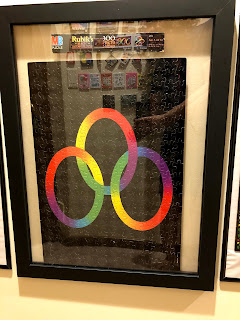 The next puzzle I did was called the Rubik's zigzaw.  This one is much smaller with only 131 frog shaped pieces.  It was a fun one to do.  I got tripped up on it while piecing together the outer edges.  Once I found my mistake, the puzzle itself was a piece of cake to finish.  NOT!  This one has 3 dimensional cubes on it and did cause confusion because of the repetitive pattern.

The final Rubiks branded puzzle is a double sided tile puzzle that needs to fit into a hexagon.  I gave up on this one. Put it in the frame and mounted it on the wall.  If you ever come to Puzzle Palace, please feel free to open the frame and solve it. 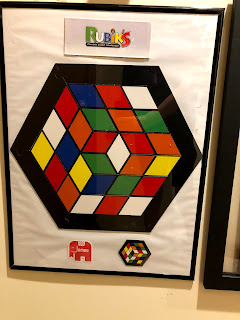 We no come to my next bit of insanity.  On a whim in Barcelona, I bought a 42,000 piece puzzle entitled "Around the World".  It has sat under the desk in the breakfast room for the better part of the year while I worked up the courage to open it.  Yesterday the day has come. I expect it to take me around 6 months of puzzling to complete it.  It arrives in 7 bags of 6000 or so pieces.  NO, I did not open them all and mix them up.  I'm not a jigsaw type person and therefor not a purest.  6000 pieces is still a lot.  I could open them all and assemble it on the floor in the void but oh my poor back.  No, I think I'll stick with the smaller chunks. When completed, I'll post again with a photo of it in situ. It will be permanently mounted to the wall on the bridge.  Until then I'll go back to regular blog posts about normal type puzzles. 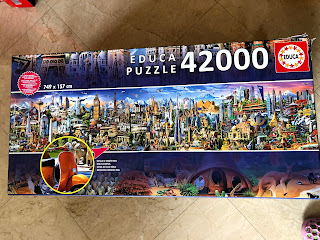 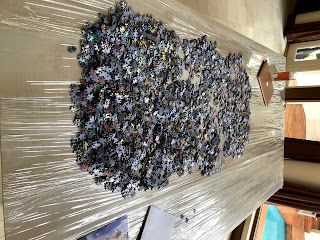 Posted by Roxanne Miller at 1:18 AM