I've backed many kickstarter projects over the years.  My most recent one that was completed was from Two Brass Monkeys.  But I'll not discuss that one for a month or two yet...

I've just found these two and thought why not.  The first, A-Puzzle-A-Day reminds me of the Philos birthday puzzle although, it doesn't come with the 3 1/2 inch floppy disk.  The man obviously bought a laser cutter and wants to use it.  Should I tell him tape will stop the burning of the edges of the wood? 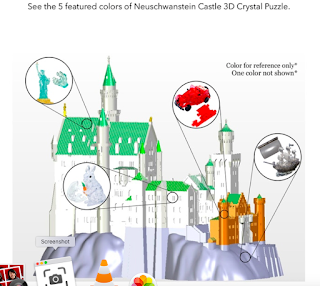 The second Neuschwanstein Castle is dear to me.  I love the crystal puzzles and would really like to see this one come to be produced. I've assembled 380 of these since moving to Florida in August of 2018 ( I left a collection of well over 200 assembled puzzles in Hong Kong when I left but that's a story that won't be told here) and really would love to put this one together as well.  Sadly, with 16 days left, I don't think it will make the funding goal.  The price is in Hong Kong dollars which probably put most people off.  The HK$ is pegged to the US$ and the exchange rate is 7.8:1.  The puzzles are not as expensive as they look.  I ordered the early bird tier iv because I realized this drops the price of each puzzle to under US$15.  I can't buy them at that price here in the US.  I believe I even paid more for the larger ones when I bought them direct.  Even the castle by itself is well priced at US$31.  Add to that the option of getting a blue duck and a yellow apple on the higher tiers and I'm sold!

The other problem with this kickstarter that I see as being a non-issue is completion once the funding period is over.  Lately there have been a lot of Hong Kong based Kick starters that have not been completed once the money has been handed over.  I don't see this as a problem at all.  First, Jeruel is a well established company.  They started out making kinatos in around 2002.  The company has really come along since then.  Now they make smart eggs as well as the crystal puzzles.  If this kickstarter is to be completed, I know they will produce this.  I think this is all part of the new bandwagon I see with other manufacturers.  I guess it helps with the initial molding costs.  Speaking from experience with my own puzzle, the amount they are looking for sounds about right.

For those who don't know, Jeruel makes the crystal puzzles that are sold in the US branded as BePuzzled.  They have licensed their products to University Games.  In Asia you can find the under the Beverly brand name.  Along with Hanayama, they are the premier producer of these three-dimensional jigsaws.

Add to that the fact that I count Lawrence Lau among my friends and I can guarantee he will follow through if the kickstarter goal amount is reached.  He is a kind and honest soul.  I feel honored to have met him so many years ago at the HKTGF.

I really hope this one goes off. It would be even better if I could get an advanced copy to trial.  I can't wait to see what he has in store for next year.  I'm still pushing for a Santa Claus and his sleigh.