Some of you may have seen our driveway at the big house (Puzzle Palace).  It has a 3D effect block pattern on it that I think is simply amazing, but others have commented that it makes them rather ill just looking at it.  To install it, we handed 3 different colored pavers to the HOA office and asked for approval.  They ASSUMED it would be a random pattern with the colors of the pavers and the installation began. Little did they know.

One of the main features of Puzzle Palace is the shape of the majority of rooms.  We live in an octagonal house.  Most of the rooms on the ground floor have this shape.  When we bought the place, there was an octagon bricked into the front driveway right in front of the house.  The wrap around drive features an octagon using side walls and planter beds and we decided to continue keep this.   In the center of this octagon, we recreated the dissection of an octagon into a square mainly attributed to Geoffrey Thomas Bennett's.  Upon further investigation, Martin Gardiner writes in Knots and Borromean Rings, Rep-Tiles and Eight Queens (p. 48, 2014) that this design first appeared in a Persian manuscript in the 1300's.  Whoever made it we are glad it has been developed.  It looks stunning in the center of the driveway. 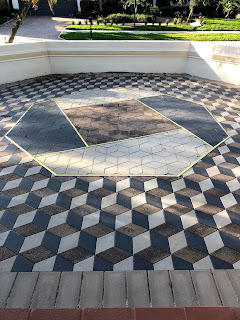 In the Museum, we decided to use a hexagon and installed Harry Lindgren's dissection of an octagon into a square.  This piece was placed at the top of the drive near the garage.  Unlike the one shown above, it can easily be seen from the street.  Needless to say, it has confused the residents of Boca Grove.  Yesterday the paver layer told me that after he finished putting the design in he went home with a terrible headache.  He ate dinner, watched some tv, and passed out at 8 pm.  He then woke up around midnight very excited. He finally worked out how it turns into a square, AND he understood why the bricks had to be placed as they were.  We had created concentric hexagons!  He told me he loved working on our two projects because he got to THINK.  Normally he just lays pavers as per a standard pattern.  Dull work to say the least.  I laughed and said if he wanted, I could give him a triangle to dissect into a square.  He laughed and went home.  I bet he will be thinking on that one all week now. 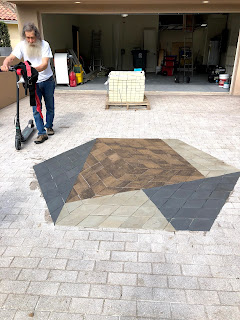 Just a question, can you make the octagon or the hexagon to a square using dovetails to connect the pieces so they form both shapes? George thinks it would be much more fun than just having 5 pieces. Or better yet, can they both be hinged so they can easily be reformed into the square? 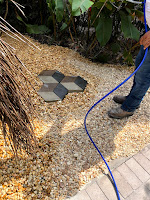 The final ground design that we have incorporated is a number of Puzzle Palace logos (from George's prior business) throughout the Museum property.  This was based off a Stuart Coffin three piece bock puzzle (number 30, 1980) that George had.  I recently gave him a puzzle that looks similar made by Wim Zwaan in 1993.  He liked it so much he made a 3d copy of it and placed it on a pedestal outside the main door of the Puzzle Palace Museum.  If you are an avid puzzler and eager to get into puzzling when you arrive, the first puzzle is to remove it from its enclosure.  It is our hope that the puzzle is played with by nosey neighbors and passersby.  If it should disappear, it's no great loss, we will just print another and be glad that someone liked it enough to walk away with it.  However, in this community, we know that will never happen. 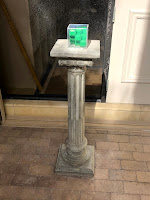 On to the weekly update on the Puzzle Palace Museum.  The electricians have managed to fix all outdoor lights, the internal lights have all the cans placed, and we are awaiting the specially ordered bulbs. The outdoor areas minus the driveway have been sealed.  We've a bit of patio furniture poolside. George is in the process of putting the bookcases together for the library and the downstairs guest bedroom.  I have completed all repairs in the kitchen and it is fully functional.  Today the washer/dryer go in so guests don't need to worry about finding a laundromat. Stay tuned next week for a new update.

Posted by Roxanne Miller at 6:00 AM