Way back in 2003 I was searching the toy shops in Hong Kong and came across this bag of seven 2x2x2 puzzles.  They were the Gundam Rubik's Cube series made by palbox.  I took a photo, sent an email to a friend and asked what he thought about them.  The price was rather steep at the time.  HK$100 each.  I guess that comes out to around US$90.  His reply was if I didn't want them to buy them for him and he'd double the price I paid.  Well, this sent off alarm bells as it were and I purchased the set.  The seller said they were so cheap because Zaku was missing.  Well, for the past 18 years I have been hunting for that Zaku.  This past month a fellow twisty puzzler gave me a heads up and said it would go too high for his wallet.  I lucked out and no one bid against me and Zaku has finally come to join his fellow robots. I won't say how much it cost, but given what I paid for the first 7, overall, it was not too expensive.  One less hunt for me. 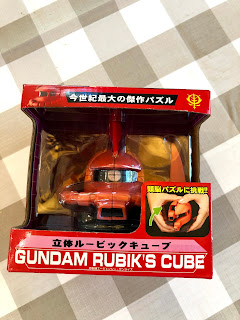 My next purchase this weeks was a complete set of the Hanayama Cast Puzzle Micro!'s.  Now this is a silly purchase.  I have all but one piece.  I was missing the cast enigma micro and when I saw this set come up, I jumped on it.  I think this set came out to something like US$8 per piece.  I couldn't pass that up.  Now we have extras to add to the treasure chest. 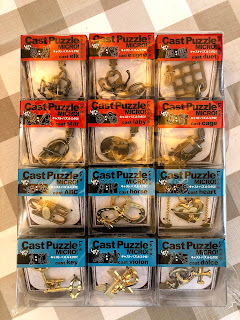 And now on to the progress of the museum.  This week we had more workers at the big house than here.  The A/C guys moved around a bunch of pipes, laid some flooring, and just really cleaned up the attic space.  We now have another 200 square feet or so of additional storage.
The museum saw a few art pieces placed, the garage painted in preparation for the epoxy flooring, and a whole lot of Kallax boxes were built.  I had one guy here on Monday to paint the ceilings, but I decided that placement of the Berrocal paintings was much more important.  Scott was meticulous in his placement.  I told him what was in my head and he placed them exactly as I wanted them.  This wall never sees direct sunlight, and we have placed the upper eyeballs so they reflect down on the paintings without having a glare from the glass. 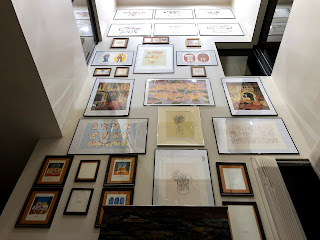 I framed and George hung a Escher-esque 3 layer jigsaw puzzle.  It was meant to have a piece of plexiglass between each of the layers, but we realized that it looks so much better without them.  The obvious place for this was above the Escher-like stairs we have in the museum. 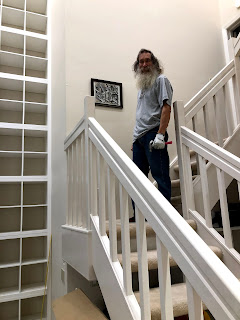 George went wild and put together 24 Kallax boxes for the master bedroom walls.  It will be perfect when finished.  I just love the placement of them.  If you stand in the bedroom and look at the reflection in the glass wall while gazing upon the 26' vase wall, the boxes blend into each other.  When they are filled, it will be stunning.  In this room we decided to stack the boxes right up to the ceiling where we can.  The boxes have not been mounted yet so what you see in the photo is not yet completed. Forgive the messy bed.  We are between houses right now.  Everything is a mess.  George has assembled an additional 26 boxes to be placed in the garage.  He's an absolute pro at this now. 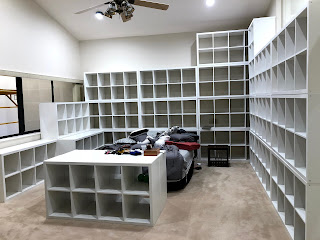 We've been told that 720 packing boxes have been completed.  All but 3 cabinets and 14 packed boxes have been picked up.  This is very exciting for us.  We expect them to be on the ship soon and hopefully they will be in Miami by the beginning of summer.  James said he figured it will take us 3 months with occasional helpers to unpack all of the boxes.  Our plan is to head over to the local university, hire two student helpers in the photography department to photograph while George unpacks and I place puzzles.  It is going to be a real project.  I'm beginning to think we may not be fully done in time for Boca Bash but that will make it all the more fun for our guests.  I'm hopeful it will be all done by the time we have set for our museum opening for the club in November.

Next week we will have more painters in the house, but that is it for a few weeks while we wait for a white epoxy base to be put into the garage floor.  Our winning competition design will be placed over the top of this.  We really want these to pop out at you when looked at.  It seems that the recent weather has caused havoc with all shipping.  We are a victim of this as well.  Our general contractors are filling in jobs when they get the supplies they need so we have been put to the back burner.  This is fine with us, we are helping a friend by giving him the work, and it gives us a break from the museum.  I'm actually looking forward to this downtime when I can just move back home and enjoy Puzzle Palace.

Posted by Roxanne Miller at 6:00 AM