When I acquired my first Berrocal and discovered the ring inside, I began hunting down other puzzle rings. Of course, I had a few from days long past, but these were the bog standard 4 piece rings. When I went online and looked up puzzle rings, a few names came up: José Grant, Puzzle Ring Maker, and Miguel Berrocal.  This got me started on a hunt for this Berrocal jigsaw puzzle ring that I had seen. 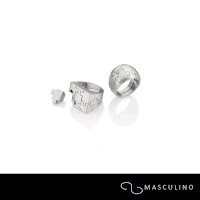 I later discovered that it was not a Berrocal, but a ring by Antonio Bernardo of Brazil. I loved this ring so much, and not being able to find one, I had George design one similar to it on his computer.  We sent it off to a 3D print shop in Hong Kong to have made in plastic which we were later going to have made into metal.  Because of the difficulty with the material being used to print the puzzle, it never really worked well and we abandoned the idea. Perhaps now that he has his SLS printer we can revisit his original work. 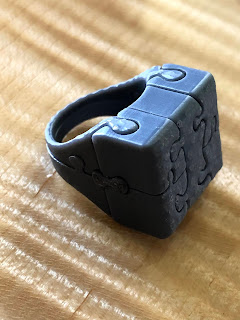 I then spent the next 11 years hunting one down.  I finally found a shop last year in of all places, Hong Kong, that sells the rings.  The price was ok, and I thought on my next trip over I may pick one up.  But as usual for me, I kept hunting.  I found one of the square rings on Poshmark, and when I went back an hour or so later to purchase it, the ring was gone.  Around 3 months later, I found the rounded one on eBay and snatched it up before it could disappear!  When it got here, it was tarnished and in need of a good clean.  George and I set out to make it look beautiful again and I think we achieved our goal.  The ring I purchased is .925 silver and is very heavy.  The pieces fit together very precisely.  There is very little wiggle room.  It has now become my favorite puzzle ring after, of course, my wedding band. 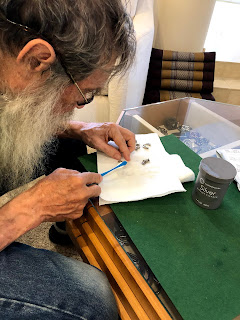 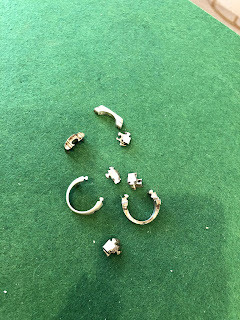 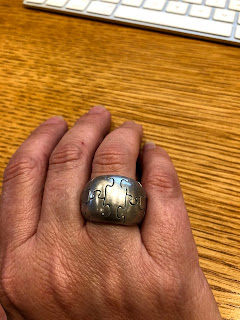 The ring can still be purchased from the designer, albeit in tri-colored gold.  Currently it is 15% off.  Now that's a bargain!  In 2010 the design won an award at Essen.  I quote from the designers facebook page:
"- ROUND PUZZLE RING - AWARD WINNER.
Once more a design by Antonio Bernardo has been internationally acknowledged and awarded. The Brazilian designer will receive his second Red Dot Design Award - one of the world's most distinguished design prizes, annually held by Design Zentrum Nordrhein Westfalen, in Germany. The Round Puzzle Ring received the Red Dot Award in Product Design, as had the Expand Ring in 2004. The Round Puzzle Ring is one of Antonio Bernardo's most elaborate designs. The Puzzle Ring was launched in 2006, born from a self imposed challenge the designer had to create a jewel made up of various parts, capable of being assembled and taken apart. Three years later, Antonio Bernardo added to the pursuit when he imagined a curved version for this ring. Made up of 8 pieces, the curved surface requires even more ingenuity so that the parts fit perfectly. "The Round Puzzle Ring is a playful jewel." explains Antonio Bernardo. Created by Peter Zec in 1955, the Red Dot Design Award honors and awards designers and products which are outstanding in creativity and excellence. Each year the jurors - an international group of renowned designers and design experts - validate the award's importance, based on criteria such as innovation, functionality and formal quality."

"PUZZLE CURVO - One of the most complex pieces ever created by Antonio Bernardo, the Puzzle Curvo ring, composed of eight small pieces, has a rounded shape. Because it has a curved surface, it required even more ingenuity for the pieces to fit together in a way that was imperceptible to anyone looking at the ring."

I agree with this assessment.  It is a beautiful piece and if you didn't know that it comes apart, it looks more like the puzzle is etched into the surface of the ring.  When disassembling the ring, there is a central shaft that comes out first.  Then the central long puzzle piece comes out and finally, the other pieces simply fall off.  The shank is divided into two pieces that slide apart.  Puzzling wise, it's much more difficult than it looks. The pieces are made such that they can only assemble one way.  If the main shaft is turned around, it won't fit in the puzzle.

One more wanted puzzle found, now for the next one; an illusionist locket in ebony and silver.

On to the museum build:

This week I am pleased to report that all of the puzzles have been picked up from James' and are on their way to the warehouse where they will be placed in a container and sent to their final destination in Sunny South Florida. We've had no workers in the museum other than to sort out the security lights that weren't being very secure and to cut a few more holes in the wall to install a few more light switches.

We did however, finally finish a major puzzle over at Puzzle Palace.  George designed a pentomino alphabet and we had a mosaic made for the front step.  Initially I had a outdoor carpet made for it, but the sun here faded it quickly and we threw it away.  One dreamy day, I said why not make a mosaic using the logo and Puzzle Palace just like the carpet I had made.  This later turned into the pentomino alphabet and we went for it.  You will notice that each letter has 12 pentominoes in it.  The only letter that is unique is the E.  See if you can spot how he redesigned it.  To finish it off, we got rid of the last of the awful red painted tiles that made up the front steps and replaced it with a marble that matches that on the inside of the house. A little paint touchup on the stucco side and all will be right as rain.  I think the finished piece looks amazing.  As usual, the folks over at Genesis did a great job for us.  Maybe I'll next have them put the street number on the garage using the pentomino numbers George created. 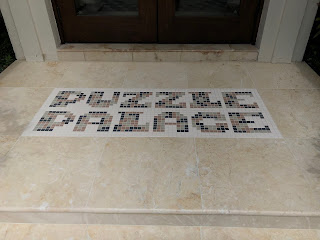 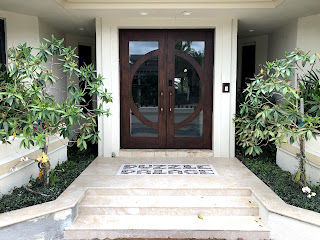 I'll close by wishing every a very Happy Easter from George and I.
Posted by Roxanne Miller at 9:14 AM