A puzzle for the G-man

I've got this millennial who likes to go thrifting and at the same time found myself in need of a few putters for the newly installed putting green.  This was a marriage made in heaven.  We took off last Friday morning and hit around 20 thrift and antique stores on the hunt for the afore mentioned putters and anything that struck her fancy.

After our 6th stop, Katherine came over to where I was checking for putters and handed me a white pitcher with the letters G and M printed in gold on either side.  She was confused as to what it was and decided it was a puzzle of sorts.  She also like the letters on the side and decided it meant George Miller.  She generously paid her dollar and seven cents for the piece and brought it home as a gift for the G-Man (the kid chose the nickname, not us). 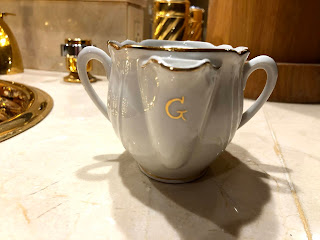 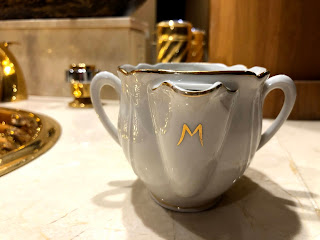 Mom of course recognized it for what it was as soon as I saw it, but was thrilled that the kid and the old man get along so well.  Katherine handed over her gift when we returned home, and they spent quite a while trying to work out what it was.  They started out thinking it was something like a justice cup.  Eventually I told them it was a gravy boat.  This lead to quite a long time spent searching the web to understand the meaning of the letters.  As it turns out it an antique French boat that allows the user to choose either fat (graisse) or lean (maigre) gravy.  The side with the M has a longer spout that allows the gravy to be poured from the bottom eliminating the fat that settles on the top.  We have no idea where this was made, or when but it sure made for an interesting afternoon read and a bit of dinner conversation.  This is our first porcelain 'puzzle' for the museum.  Thank you Katherine! 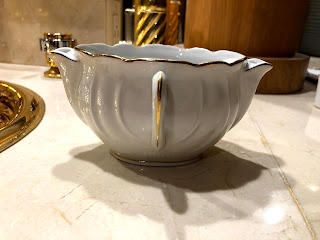 On to the Museum build. I am very pleased that the landscaping has finally been finished.  It looks fantastic. Very tropical and slightly jungle-like.  The electricians came over and put in one more outlet in the garage for the wine cooler and placed all the Lutron switches.  They should be finishing up some time next week.  I'm hopeful that the guys get back inside and mount the rest of the cabinets soon.  We have the solar installation from 3-6 May so that is another thing to look forward to.  The garage floor will get it's first coat of epoxy and the base white epoxy in preparation for the designs we will eventually have installed on the floor.  We also had all of the "Northern" trees removed from Puzzle Palace along with a few dead palms.  Landscaping begins here on Wednesday.


Last week I posted an easter egg in one of the photos.  I'm sad to say, I don't think anyone noticed. This week I add a visitor to the museum.  Can you spot him? 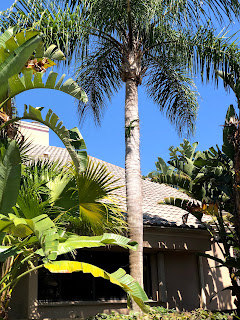