One of the puzzles that is a part of the Hordern-Dalegty-Miller collection is the Scannavini Puzzle Chest.

Episode 8: Michelham Priory. If anyone knows how to get a copy of this video, I'd love to get a hold of one. I contacted the BBC and it cannot be downloaded or sold for non-commercial purposes.

On to the chest.  I spent a long time looking at it and doing nothing.  Since the puzzles arrived at the museum, we simply had it sitting in the great room with a cardboard box on top and a wooden tray on top of the base (impromptu table to hold puzzles). It spent a good 2 months sitting near the great wall away from all of the activity going around in the house.  This week it finally got moved into it's permanent position in the chest room. 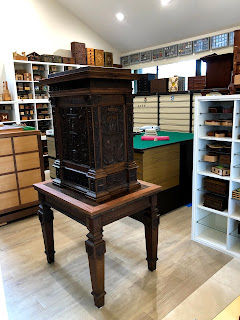 When it got placed, I was very excited. It's a beautiful piece to look at.  I was tempted to open it, but there was so many other things that needed doing so I controlled myself.  Well, the day came when I just couldn't do it anymore.  The workmen were in the house finishing off mounting more of the display cabinets and painting the garbage can shed so I was just in the way.  I couldn't do anything that day so why not.

I began working on the chest, and before I knew it I had removed 16 different drawers. The first one I opened with one of the workers standing next to me and it was a set-up. James has a childish sense of humor.  The drawer was slightly ajar and inside was a squeaky, worm that jumped out at us.  It worked, we both shrieked and jumped back! 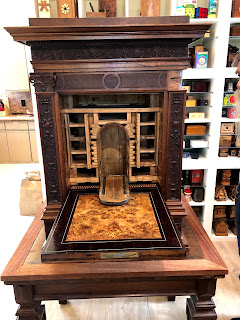 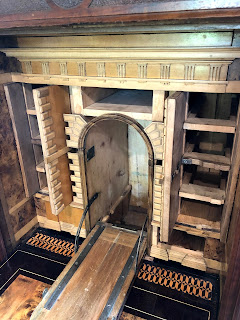 I thought I was finished, but alas, I wasn't. George came down to do a bit of repair to some damage done during shipping and he found 4 more drawers. The best part for me was behind the main arched door.  Inside is a safe that has a "puzzle" lock to open.  To be honest, it wasn't a hard one to solve, but it is fun none-the-less.  I felt like Indiana Jones finding the arc.

It was almost a religious experience. Next up: the apothecary chest.

A video of me returning it to a solved state can be found here.
On to the museum news.  Once again we have bought out all of the Ikea glass Kallax shelves in South Florida. We are now installing another batch of shelves.  This time we recieved 252.  George has a lot of work to do, but the master bedroom will be completed and he can move on to the hallway.  The last phase is the garage.  We had a work crew out last week to finish up a few jobs: painting the garbage shed, building a massive table, 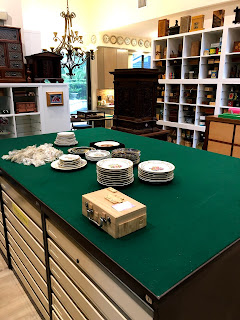 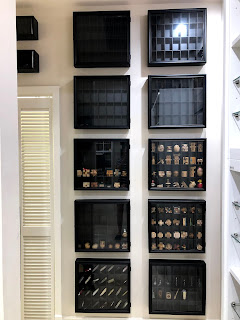 and hanging a few records. 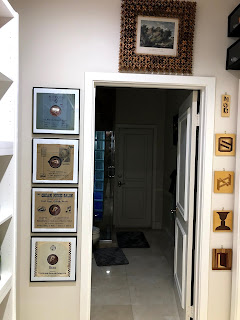 Soon we will just be photographing and cataloguing.  We are almost ready to open for business.  Invitations have been sent to a select few for a puzzle party next month, and after that, our doors are open for any serious puzzlers who request a visit.
George has begun the process of developing the webpage.  Read this as he is refreshing his memory on the code.  This is great!  He's moving on this now.  I'm looking forward to our next cruise because it will give him time to finish the program.  I am eager for the collection to go online.
We acquired a piece of art from the most recent Gathering4Gardner auction and have installed it in Puzzle Palace.  The space that it is in has been waiting for 37 years for just such a piece.  When we brought it home and put it in place, it was like putting on a glove.  It's a perfect fit.  This is a physical manifestation of a hyperbolic plane.  Wait until we change the lights to match the sculpture! 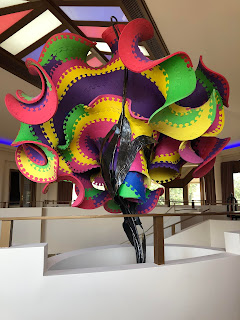 .
Finally, one of my oldest friends has made us a banner for the museum.  We have known each other since kindergarten and although we live in two different states, that hasn't stopped our friendship.  I've been in awe of all of her afghans and other blankets that she has been making so I begged her to make this piece for us.  George designed the letters and Diane did all the hard work.  I can't begin to thank her enough for the gift she has given us. 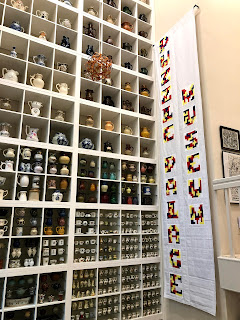 Until next week, Happy Puzzling.
Posted by Roxanne Miller at 7:20 PM