On the 2nd of October my older daughter got married.  As she lives in Illinois, we decided to take a road trip to go to the wedding.  3 days of driving for anyone who cares.  We had the time so why not do it.  I am not from Illinois.  My family moved there after my mother passed away, so going 'home' doesn't appeal to me.  It's nice to see family, but it's just not home any more.

On the way we stopped at a few puzzlers homes to see friends and what they are up to.

Our first stop was in Georgia to see Mat Nedeljko.  His workshop has got to be the cleanest one I have ever seen.  The floors were so dust free and there was not a speck of wood dust anywhere!  He showed us his beautiful work using an antique french designed machine to cut marquetry that he built by hand.  I've not been so impressed in quite a while. 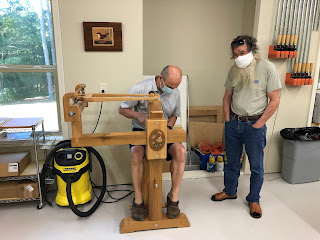 George learned how to change the color of wood using vinegar and steel wool and Katherine had fun playing with the world's cleverest dog. 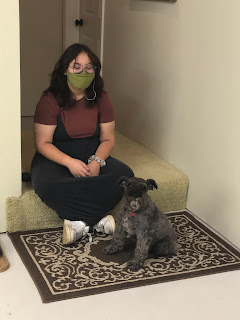 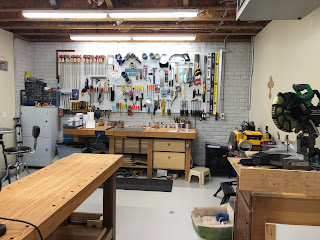 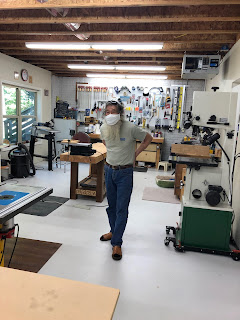 From there, we went on to Chicago for a visit with Bill Cutler.  It was nice to see some of his early designs, and to verify a few IPP exchanges.  We had a wonderful although short visit because I just kept forgetting to add charging times to our ETA.  Bill even showed us a puzzle he designed and made when he was a teenager. 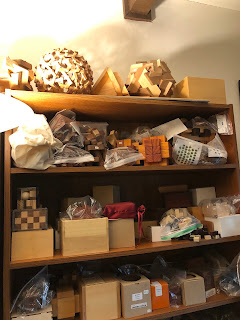 The visit to him ended with the gift of a few articles he wrote on burr puzzles that I had been looking for and a very nice dinner in a Greek restaurant. The flaming cheese was interesting, I'm glad we tried it, but once is more than enough.
The next morning saw us at Jerry McFarland's house.  Upon arrival, we went straight to the basement where his workshop is.  This one is much different from the first we saw on this trip.  I was super impressed by the vacuum cutting machine he had set up.  It uses a pneumatic pump that comes complete with a whistle!
He told me he uses this to cut out all of his puzzles on.  It was run by one of the oldest computers I have ever seen.  The adage, if it works don't fix it fits very well in Jerry's shop. From here we went around the corner and saw his CNC machine.  Again run by an ancient computer.  I was impressed that he could get it down the steps and into his basement.  That thing was huge! Equally impressive to me was that all of his files are written in G-code.  I had no idea one could program with that.
We watched it cut a few pieces, and then headed out for lunch where I had the opportunity to try and solve burrliphant and another he brought along.  We made a deal and hopefully these two puzzles will find their way to the Puzzle Palace Museum soon. 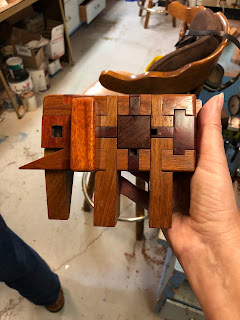 Our next stop was an auction house in Chicago where I picked up a number of puzzles I had just won.  And then on to the wedding.  We rushed home to clean the house and get ready for the first Boca Bash.
This year even though G4G was cancelled, we decided to go ahead and have Boca Bash for fully vaccinated guests.  Our first, Tanner arrived on Monday evening and after a delayed flight, We were able to pick him up and return home to fall into bed and a blissful slumber.
The next morning George and Tanner set to work assembling the Fuse 1 SLS Printer that arrived in February! It is now up and running and hopefully this weekend it will have a puzzle or two made on it.  Tanner of course did a self guided tour of the Puzzle Palace, and over lunch he told us that he thought he was in the museum and just missed a room or two because the number of puzzles here didn't match what he expected.
After lunch, while George was napping, I took Tanner to the museum where he was rendered speechless for a while.  I showed him all of the rooms and left the chess room for last as he told me he was wanting some time alone with the Apothecary Chest.  I dutifully took it down and placed it on the puzzle table in the room.  We chatted for a while while he simply looked at the chest.  And then it happened!  He jumped in and began solving.
I had to return to the house to get dinner started, and sadly we had to go.  When we returned to Puzzle Palace, I had an epiphany an gave Tanner the scooter.  He shot right back over to the Museum and carried on until I called him to dinner.
He and George shot a few games of pool after our meal, and then it was time for bed.
This morning we pick up Stan Issacs, and the rest of our guests arrive on Friday.  I'm sure someone will post photos of the puzzle party on some form of social media somewhere.
On to the museum update.  We spent the week tidying up for the puzzle party so not much was done.  The main item to be finished was to get the plates placed on the wall above the breakfast room table.  This is the last major project and now we can get on to the cataloguing. Expect no work done to be posted next week.
And now I'm off to enjoy Boca Bash!  Happy puzzling everyone!

Posted by Roxanne Miller at 8:24 AM