Well, we finally did it.  We managed to host a rather small Boca Bash.  Initially this puzzle party weekend was to have around 20 people.  We have decided to attach Boca Bash to Gathering4Gardner every other year.  When the G4G was cancelled yet again, we had given up hope, but as it turned out, we had a few friends who really wanted to come and had already purchased tickets.  Because of this, we decided to go ahead and host BB1.

Tanner was the first to arrive on Monday and we drove to Miami to pick him up.  His flight landed around 11:30 pm and there was no way he would have gotten here at that time of night.  We brought him home and dumped him in a bed.  What a terrible hostess I was.

Morning came and George commandeered Tanner and they went to work assembling the SLS printer. 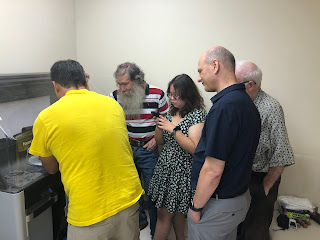 George has only had it since February, but the museum build was more important.  When George took his nap after lunch, I took Tanner for his first visit to the museum.  He was in heaven I've been told.  I watched him solve one puzzle after another.  The first one he hit upon was the Apothecary Chest. The best photo I took was of his first box solved. 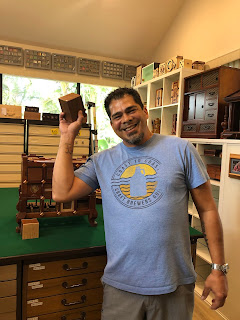 This went on and on and I know he wanted to stay longer, but eventually we had to go home for dinner.  While I was preparing the meal, George taught him how to use a scooter and once we had finished dinner he asked permission to return to finish the chest.  We sent him on his way and explained how to get back into both houses.

The next day we went to pick up stan first thing in the morning and then headed home for lunch.  Once again, George needed his nap and I brought both guys to the museum.  Do you see a pattern here? Thursday afternoon I played cards with the old girls and the guys all spent the day at the museum puzzling away.  That afternoon Matt D. showed up as did Bill and Scarlet.  Just before dinner Chris came by again and we had a full house.  On Friday Mat N. arrived as did Tevin and Morgan and our youngest daughter.  Dinner was for a full house.

Saturday was the main event.  Brian G. arrived as did Brent H. (later in the evening). We spent the day puzzling and building furniture. One of the highlights of the weekend was to erect the George Hart Sculpture "People".  Mat and Scarlet attacked it with gumption.  At one point she said a little bit of wood wasn't going to stop her.  All I heard was a bunch of talk about heads and crotches, elbows and joints.  There were also quite few free screws thrown in as well. 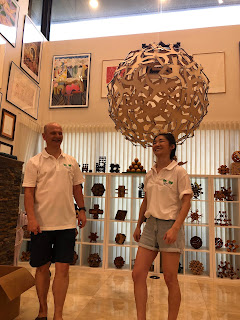 Of course, there were times where the supervisors outnumbered the builders, but all had a go at helping out.  When we got to the end we realized that we had the sculpture inside out so the engraved person couldn't be placed in the piece.  It now rests on the mantle. We managed to get together the rest of the puzzle tables.  Now all I need is the glass. 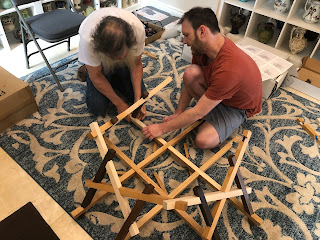 After a long day of puzzling, I went back out to the house to lay out the dinner. Sunday was Morgan and Tevin's anniversary and we decided to celebrate a day early. Cake and champagne was shared all around and everyone decided without any words being spoken to spend the evening on the IPP wall.  The newly-weds went back to the museum to do what it is young people do. 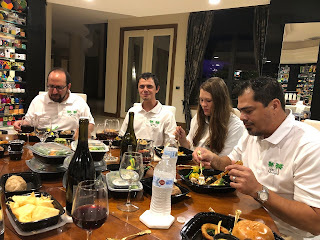 Sunday was another long day of puzzling and I lost track of time.  Lunch was had and dinner came and went and the puzzling continued.  By the time I went to bed Sunday evening, I was beyond exhausted.  And I didn't really puzzle, I just hosted.  I can't imagine how those boys all made it through the party 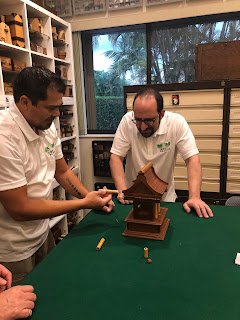 On Monday morning Katherine took Tanner to the airport earlier than is humane.  George took Matt D. around 11 to the airport.  Brent opted out of a ride and took an uber so he could puzzle a bit more.  Finally, Mat N. drove down in the evening.  Stan, George, and I had an earlier dinner and headed to bed.

On Tuesday George and Stan spent a bit of time in the workshop building a few puzzles.  They got the laser cutter up and running finally.  Stan dismantled a Berrocal and we had a nice chat. 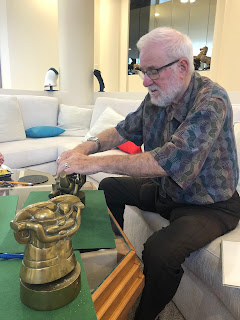 On Wednesday morning we sadly said goodby to our last guest.

We hope that in future we will be able to coincide with G4G as originally planned.  If you want an invitation to the next Boca Bash, give me a shout. Mind, we don't expect the next one until 2024.

I'm sure there will be a blog post or a video sometime showing the events of the weekend. My appologies for a lousy blog post, but I'm still exhausted.

No museum update this week.  Happy puzzling all.