Today is our first of four sea days.  I’m looking forward to them. We’ll play some cards, we’ve a few ATW events to attend, we’ll pack, and we’ll just spend time together before returning home to the rush of real life again.

Our first sea day was a bit rocky in the morning, but by noon it had cleared up.  At 10am we met with another couple to teach them to play Hand Knee and Foot.  We were impressed.  They picked it up rather quickly and were very good at it.  Ok.  In fairness, they also play a version of it at home so it was an easy learn for them.

At around noon we broke off for lunch, then George and I went back to the room and played a few games.

Dinner that night started at 5:45 and was an Around the World Final Dinner. 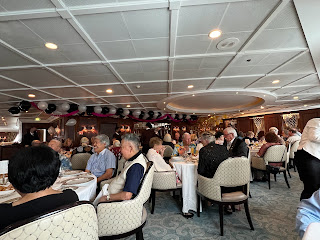 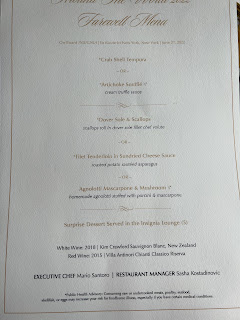 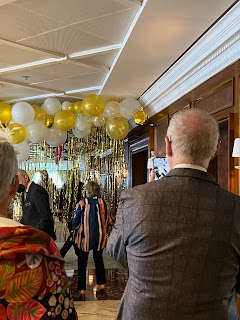 We arrived at 5:45 and when asked to be seated with other couples, we were told all sharing tables were taken.  What? The entire center was opened.  I found this to be unacceptable. It is a "sharing night" and they used up all of the 2 person tables around the room.  We weren’t the only ones not happy with this situation.  The worst I saw though was having a single lady seated by herself.  Shame on you Oceania for such a cock-up.  Add to this the lack of pre-dinner cocktail as no one told us to grab one, nor was there anyone at the door to hand one to us.  I won’t even bother complaining about the rare stake I ordered that showed up well done.  No matter, my beautiful lover and I managed to convince our daughter to look for a house.

After dinner we went to Insignia Lounge for dessert. As expected, they came in with Baked Alaska.  We were given a moment to applaud the cook and the room staff (I thought this rather nice) and then they handed out the desserts and another glass of our choosing.  When it came, we were a bit dismayed as the BAKED part of the Alaska was missing.  Ah well.  The company was nice and so was the music. 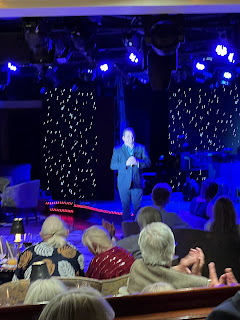 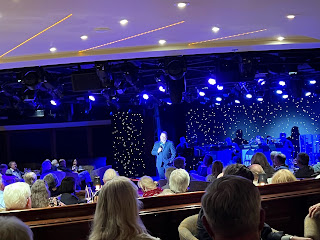 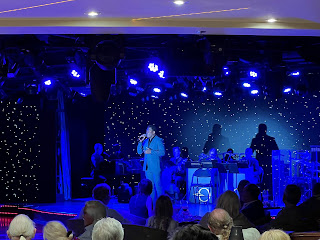 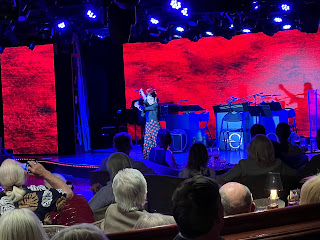 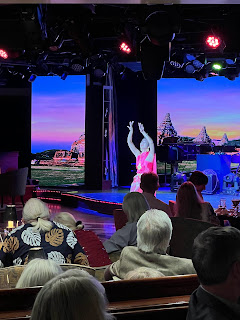 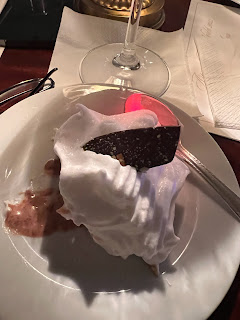 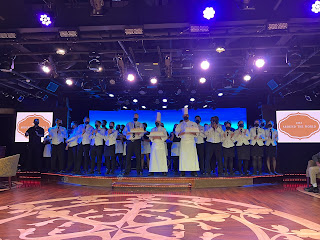 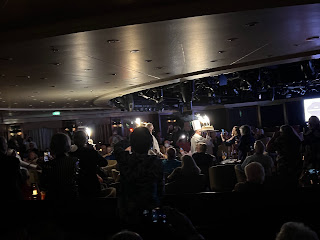 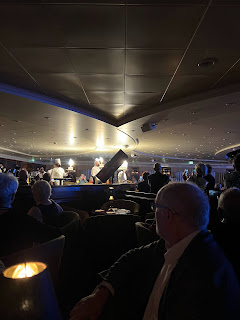 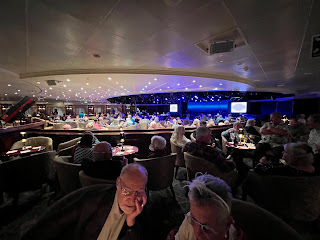 After a bit, we retired for the evening.

I woke at about 5 am or 6 am if I didn’t turn the clock back. No matter.  I didn’t get out of bed all day.  No, that’s a lie.  I got out of bed to toss my cookies, then take a couple of the sea sickness tablets.  I tossed those too.

Around 11 George went upstairs to meet with someone to talk about 3D printers, then he went on to lunch.  Me, I stayed in bed praying to Poseidon to make it all stop.  When George came back down he told me our friend showed him the storm we were in and it was a doozy. Thankfully we would be out of it by tomorrow.

I had a few saltines and an apple and spent the rest of the day in bed.

Around 7 we ordered some room service. I kept down a bit of corn soup and some more crackers and went to bed hoping that by morning this would all be over.

Today I woke to smoother seas.  Thank you Poseidon for granting my wishes!  I spent the morning finishing the latest blog post and uploading it.  Which brings me to another thought.  If you wish to continue reading about our travels, the move to Italy, and all of our puzzling, you can simply bookmark the main page www.ipp30.blogspot.com and check it once a week or so.   I usually post updates on Wednesdays.  I won’t be posting to the Oceania Facebook pages, or the Cruise Critic forum once we get off the ship.

After lunch, we I spent a bit of time packing away the last of our puzzles.  We have 4 suitcases full of them.  I have 2 suitcases and a carryon left to pack our clothes and games into. I’m not sure how well this is going to work for me but it’s a puzzle.

I also spent the time packing some stuff to go into the crew charity fund auction.  FYI: If anyone wants a 3D printer, we donated the one we have been using on the ship. It’s a great little starter.  The auction is on the 2nd and it’s for a good cause so everyone go out and bid and bid high!

After that, we played a few more games before dinner in Polo with friends. 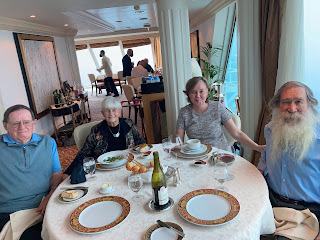 At dinner tonight, we were told the waves were crashing over Horizons on the 10th floor. I was told it was 14 to 18'.  I'm glad I was prone. The small video I took of it was more than enough time for me to be looking at it.

All night long, the foghorn was blasting today. It was a very foggy evening.  You couldn't cut it with a knife.  It is as thick as pea soup.  I've only seen this thick of fog in cartoons. It was pretty cool to go through.  The sound of the horn was rather comforting truth be told.

For one final time, I decided that George should have a pedicure and I would get one last massage so at 11 we went up for one last bit of guilty pleasure.  After that, we went to lunch before heading to cards with our friends.  We really enjoy playing with them and will miss our sea day games.  Today I told them a small secret that we use to gain points.  I'm sure they will use it against us the next time we play.

Today was the Ship Building Sea Trials.  What a fun activity. I took a few photos of the boats. The winners were very proud of their work.  Well done to all. 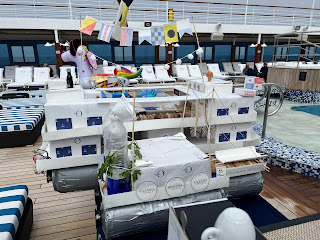 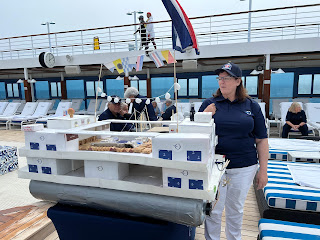 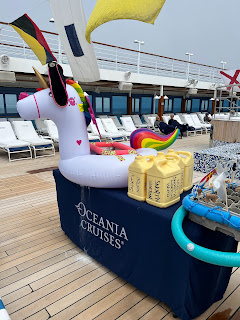 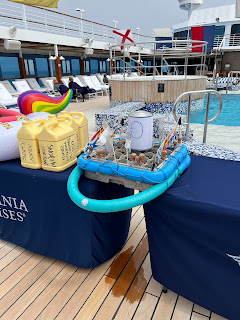 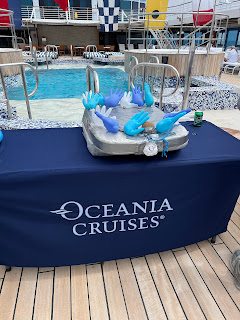 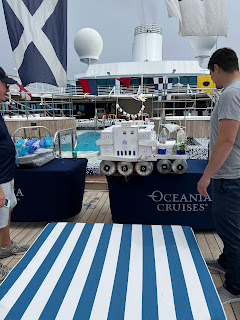 Our excitement this afternoon was to go get George's finger lanced.  My poor lover had a manicure and he managed to get an infection in his hand somehow.  We went down to the medical center and of course he had to show the doctor which one hurt. 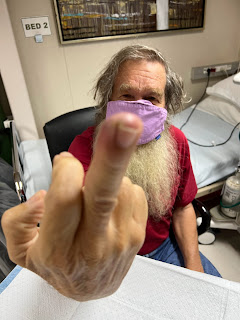 Poor thing.  It was obviously painful I could tell by his shaking.  It's done now and he'll heal soon I'm sure. 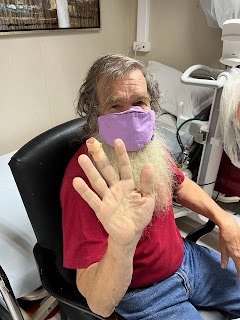 Of course I had to pack for the trip home.  How did I manage to get so much stuff?  7 suitcases and a few carryons.  Oh my. Well, I decided to purchase 2 extra bags to be sent home via luggage forwarding.  This is supposed to be a terrible flying day. I'd rather pay the money and not be bothered by it.
Dinner was dinner again.  5 more days until we return home. I know this sounds terrible, but today is day 190 and I'm ready to go back to my own bed.

All in all, it was a rather dull 4 days at sea.  Tomorrow is St. Johns, Newfoundland.  Until next time, Happy Puzzling and Smooth Seas.

Posted by Roxanne Miller at 4:00 AM

Email ThisBlogThis!Share to TwitterShare to FacebookShare to Pinterest
Labels: Around the World Cruise, sea days