Wow!  What a company.  I have a real love/hate relationship with them. Over the years I've had good and bad service and I really don't know which way to go.  And yet, like a battered wife, I keep going back for more.  We already know I'm a glutton for punishment because I'm a puzzler, and anyone who is a puzzler is a glutton for punishment.  We keep going back to the same old things time and again.  Sometimes they work, sometimes they don't.  And that folks is my relationship with Bits and Pieces.

I first encountered this company way back in the mid 90's.  They had a booth at the HK toys fair and I went.  At that time, companies were still allowed to give out free samples and many did give out little bits and bobs in the hopes of drawing in customers.  Bits and Pieces was no exception to this and I have a couple of these puzzles within arms reach.  At that time, the quality was pretty good.  Although, the puzzles were small so I guess that may have had something to do with it.  Now, I'm not so sure.  The puzzles are getting larger, and it seems to be hit and miss with them.  Don't get me wrong, some are fantastic designs.  Others are just bad quality.  Wil's puzzles these are not.  But that's no reason to NOT get them.

Looking at the photo below, all are from Bits and Pieces.  Yes, I have many more that aren't shown here.  These are just the ones that were within reach, or from the batch that came in today.  The wooden 5 piece (The hole in one) in the right hand side is nicely done.  I've no complaints.  Hercules, just below it, is also a nice puzzle.  The Kamei gift box is not too shabby although you can see the lines where it opens.  The One way packing puzzle on the bottom center is ok.  It's a bit loose for the pieces that pack in, but with my humidity I almost like that.  Others will not.  The Kamei heart box on the bottom.  Boy that one is not so good.  It looks pretty, but the opening and design of it is just cheap.  You can see every glue line there is.  To open it, you just need to wiggle it a bit.

On to the metal puzzles.  The top left is called Sputnik and it's ok.  It's more of a guessing game than a puzzle, and other than the rather sharp edges, I've nothing to say about this one.  The next two: EZ Unlink and EZ Galaxy are very different. The EZ Unlink is nice.  it doesn't fall apart in your hands and has a nice heft to it.  I'd get this one. The EZ Galaxy I would pass on.  Go for the Puzzlemaster verion called Great Collision.  Moving down there is a 4 leafed clover and ying and yang.  Both hold together fairly well.  Not too problematic.  The torpedo is a different version of a classic and a bit on the light side.  I worry that this one isn't very sturdy.  The Knot Simple puzzle is dead easy.  In fact as a take-apart puzzle, it isn't a puzzle. It's a joke.  When I unboxed it it fell apart in my hands.  This one is a pass.  Secrets of the heart (that's a Sacajawea dollar on it for those of you who were wondering.) Is ok.  No complaints.  It works as it should and has a bit of weight to it.  The key with the ring.  What a joke!  It is so flimsy and sharp that I've never bothered with it.  It has a carry case, and I took a few photos then tossed it in the box. I don't think it will surface anytime soon.  All Hail the King (Marcel, you don't think highly of yourself do you?) I have two of.  One is boxed, the other is open.  Both are B&P versions.  Go figure.  And finally, Fit to a T.  The puzzle that started my long running affair with B&P.  A nice little puzzle that is just a tiny bit loose in the box. But hey, I'm not complaining, it was free! 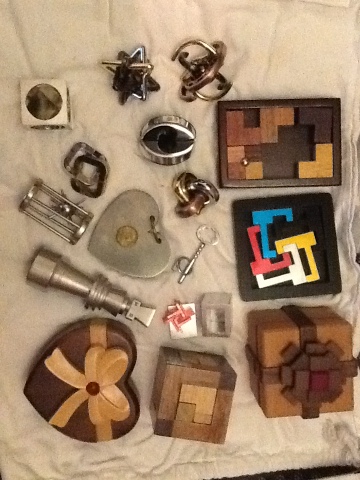 And now for the reason I started this post.  Last July I ordered a bunch of puzzles from B&P.  They sent them to the wrong address even though I changed the one on record.  Nothing came in and around September I called to find out what was going on.  I mean they were only sending it to Florida.  When I found out I was more than a little bit upset. Mostly because they no longer had stock of the puzzles I wanted.  The company issued me a credit certificate in November and washed their hands of me.  around 4 months isn't too slow.  Or is it?
It turns out you can only use these if you call in the order. OK, I'm in HK.  The company is in the US.  Toll Free numbers are charged at international rates.  Long and repetitive story short, over the past year I've ordered twice from B&P both over th phone and neither time did the operator let me use that certificate even though I tried.  Well tonight I finally got an operator who was new and I got to use my refund certificate!  Finally. Only 11 months after it was issued!  Nice deal that is.  They have you don't they?  No money back and over a year to get your refund!  WOW!  Ok, so I got a bunch more puzzles that I hope will arrive before Christmas.  Oh, and for my trouble of spending 1/2 hour on the phone, they knocked $5 off the shipping.  Big whoop!
See, hit and miss.  Love/hate.  B&P and Rox.  I suffer through and will continue to buy from them as the years go by I'm sure.  But I do so willingly and know exactly what I've gotten myself into.  Go check them out, but remember I warned you.
Posted by Roxanne Miller at 6:00 PM