For as long as I can remember I've always wanted to attend a Dutch Cube day.  As luck would have it, this year I was invited to give a few talks in Europe with an open ended date.  Since it was totally up to me, I checked the academic calendar and discovered that I could manage to attend DCD!  I headed straight into my bosses office, got leave granted and booked my flights!

I immediately contacted the organizers and a few close puzzle friends to set up a meet and such...
I flew into Amsterdam, dropped off my bags, ran to talk and then headed back to the hotel.  I'm such a lucky girl because my puzzle friend Hendrik was going to DCD as well so he took a detour and picked me up to drive down together. 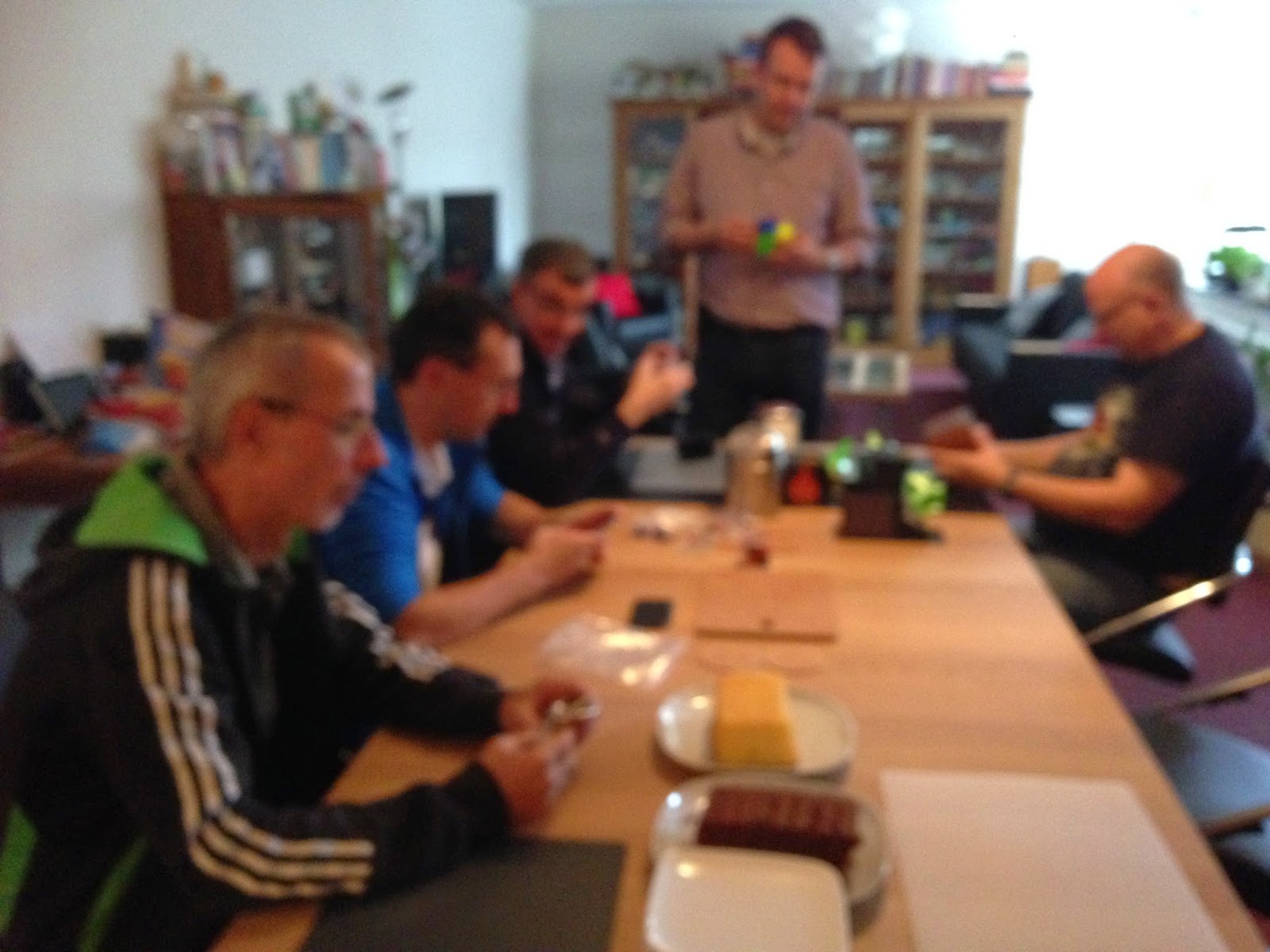 We drove down and checked into our hotel then headed back out for an afternoon of puzzling at Rob Hegge's.  When we arrived, I saw many familiar faces. Wil, Rob, Allard, Chris...More that I have forgotten over the past month of work and more work (I really should post these right away.  My memory isn't quite what it used to be.)   Rob has got a fantastic setup for his puzzles.  Well, his house is a lot bigger than mine and he doesn't have Mr. Man telling him to leave the puzzles in the bedroom.  Puzzle after puzzle I photographed.  I had a play with a few, but as always I' afraid to play with anyone else's puzzles just in case I can't get them back together again.  I managed to solve just a couple of puzzles which is very good for me.  I'm really not a solver.

From there we went to Rik's house for pizza and more puzzling.  Again, he's got a great room for his puzzles and I tool loads of photos of them.  His shelves though interested me the most.  He has this movable wall with loads of shelf space that can be adjusted to the height of the puzzles that are put inside them.  We all stayed around for a few hours, but with DCD looming, we had to head back to our respective hotels and sleep before the morning.

Rox though is ever the party girl and had one last beer with Hendrik and Maarten before turning in.

The next morning I was woken early and we headed over to the venue for DCD.  As I was along for the ride, I was enlisted to help run Hendrik's table.  But that didn't stop me from being Rox.  I walked in and started giving hugs to all that I hadn't already hugged. 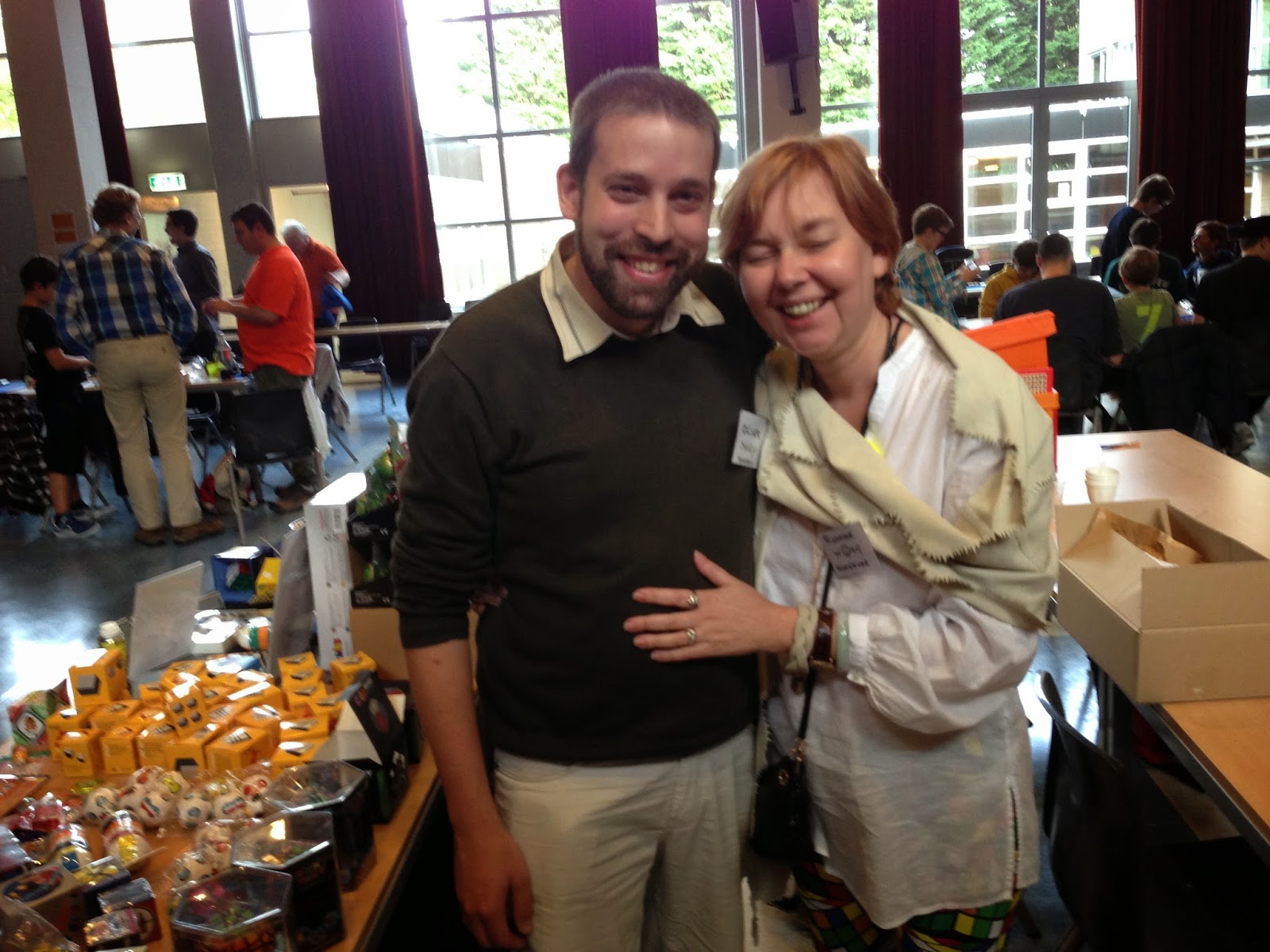 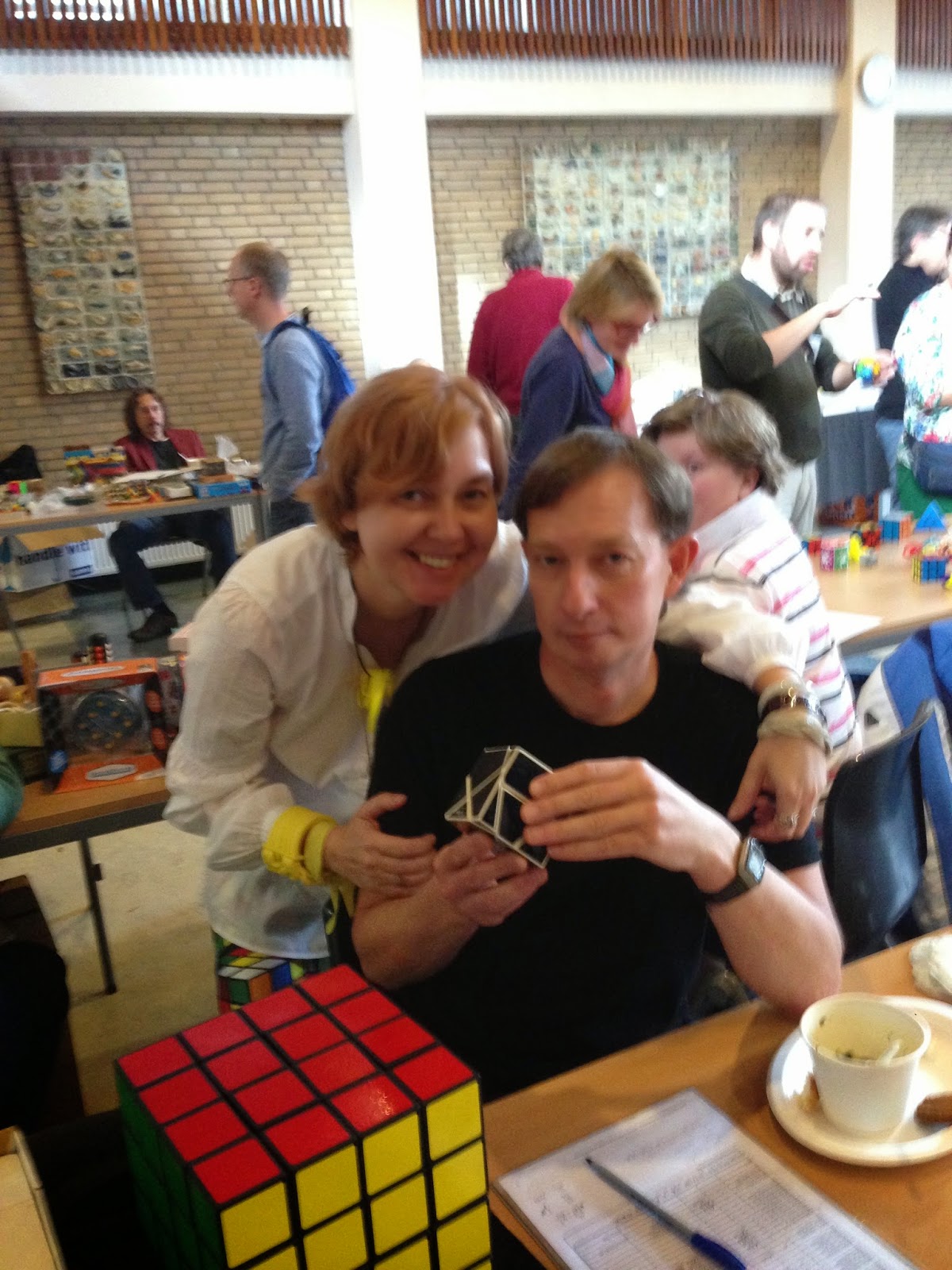 The big thrill for me was to finally meet the infamous Tony Fisher.  He was sitting across from Hendrik so I got to spend a bit of time chatting with him.  Of course, he got the hugs and a few kisses from me too.  I got to meet Olivér Nagy as well. 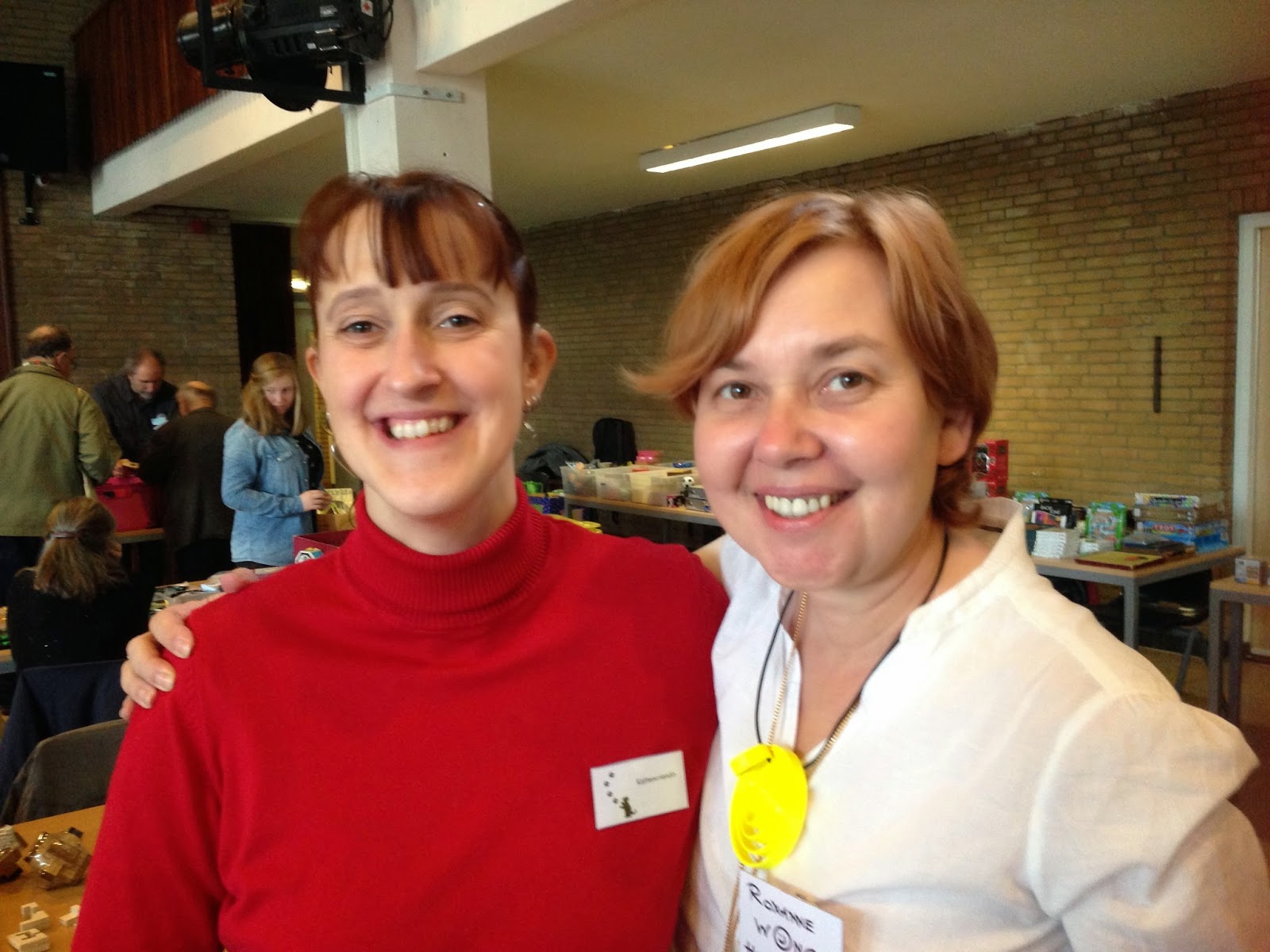 The morning began with setting up the table and then I left Hendrik and made a run around the room.  I made a few purchases, but not many. It seems the longer I collect these things, the less I find that I don't have, or really desire.  I did find a few puzzles that I've been hunting for a while and picked them up without hesitation.  I finally managed to find a Bandelow's Magic Jewel and an Oki diamond keychain.

I went back and ran the table so Hendrik could go spend some of his hard earned cash and while I did who came over but fellow puzzler Katten Vriendin.  We had been chatting online for quite some time and it was a real treat to finally meet her. 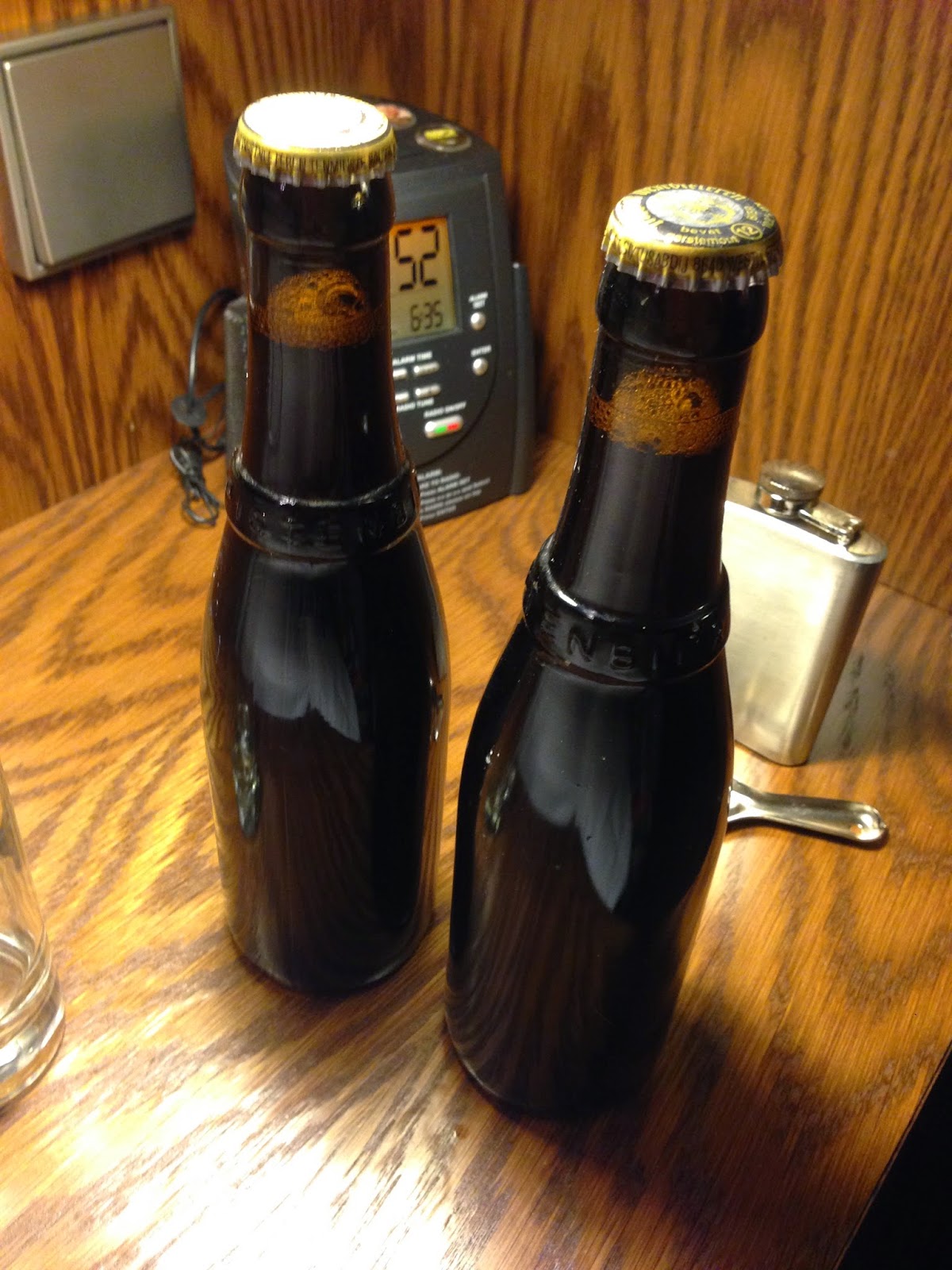 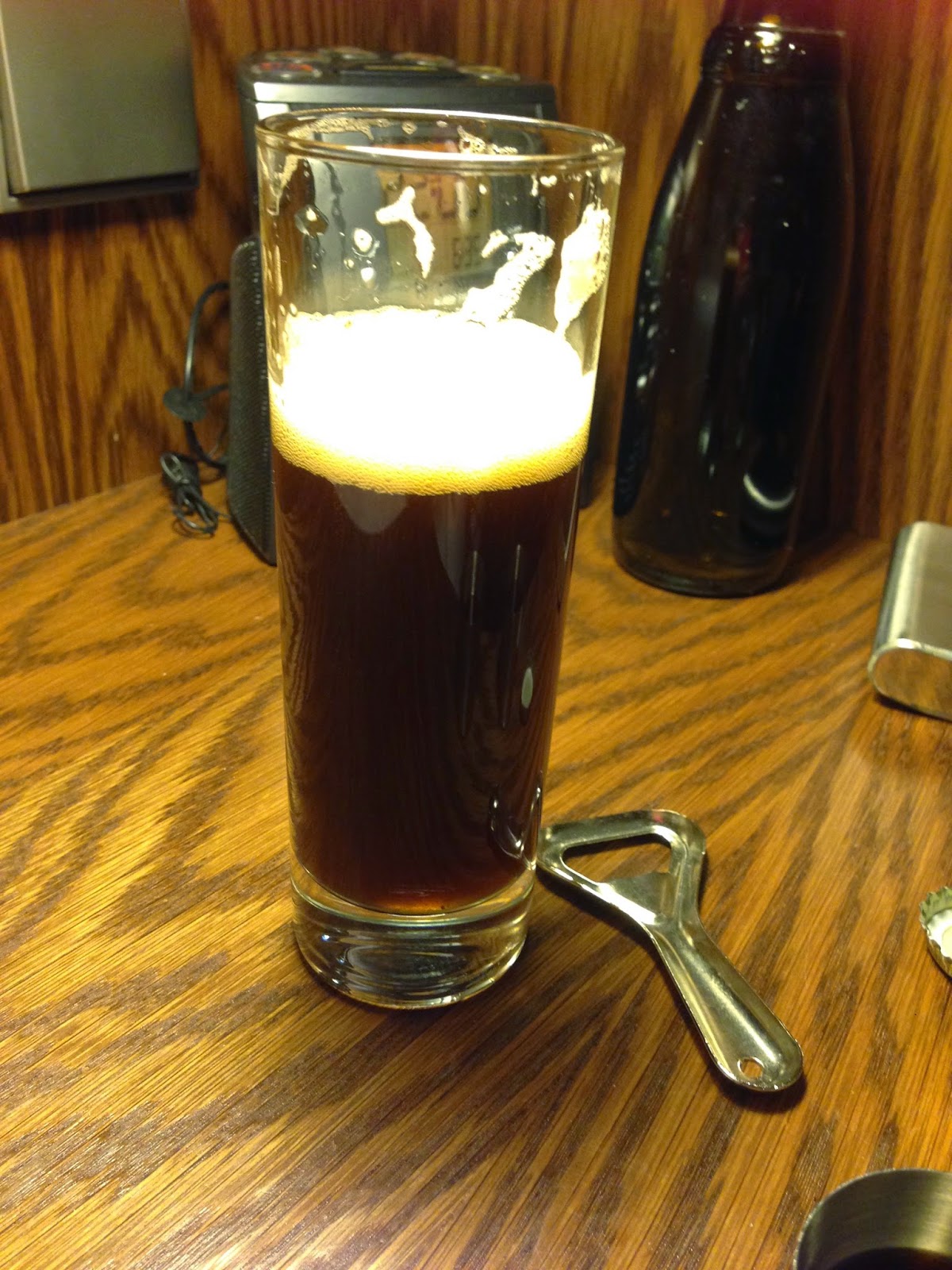 After having contacted the organizers and inviting myself along, I was asked to give a little talk about puzzling in Hong Kong.  I had given one in Finland the previous spring and didn't want to repeat that, and Otis had given another at IPP.  Me?  I ended up talking about what else? BOYS AND TOYS!  For being the person who traveled the farthest to attend DCD I was given a nice Belgium beer which Hendrik and I shared later that night.  It really was good!  But the best thing for me was the gift of Oskar's Key that I had been looking for.  Wil found it and I purchased it from him.  That silly man kept teasing me about it being in his hotel room and you can only imagine my surprise when it was given to me as a gift.  Thank you Wil and others! 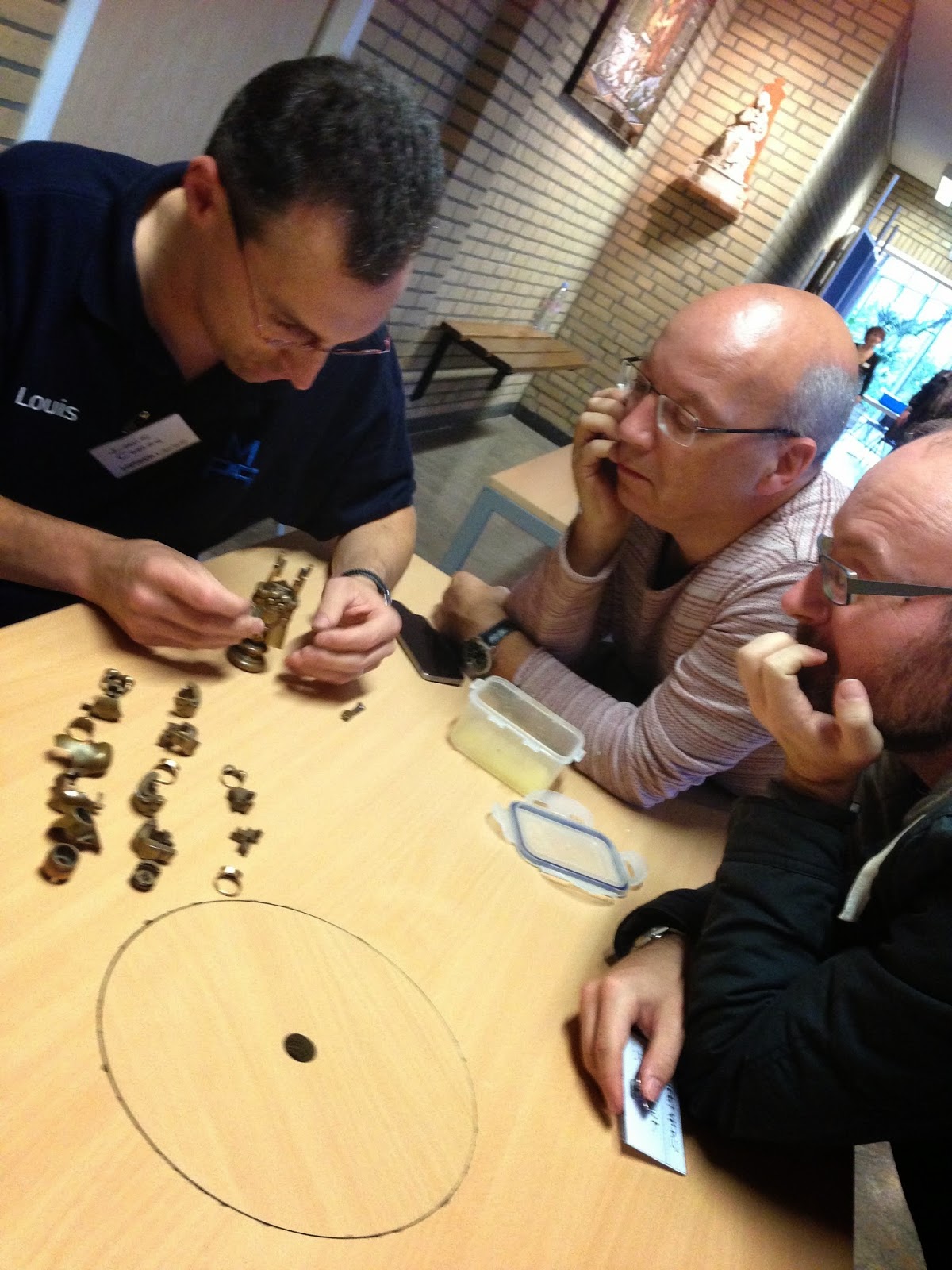 I pulled my usual take off David and hand it to some random puzzler.  This time it was Louis.  That guy is a puzzle king!  He had it back together in minutes.  I also brought Alexandre along and bless that man, he reassembled him.  Yes I know.  It's my puzzle, I should be able to do it myself, but well, I put him in a box and forgot about it.  I knew I'd find someone who could do it. 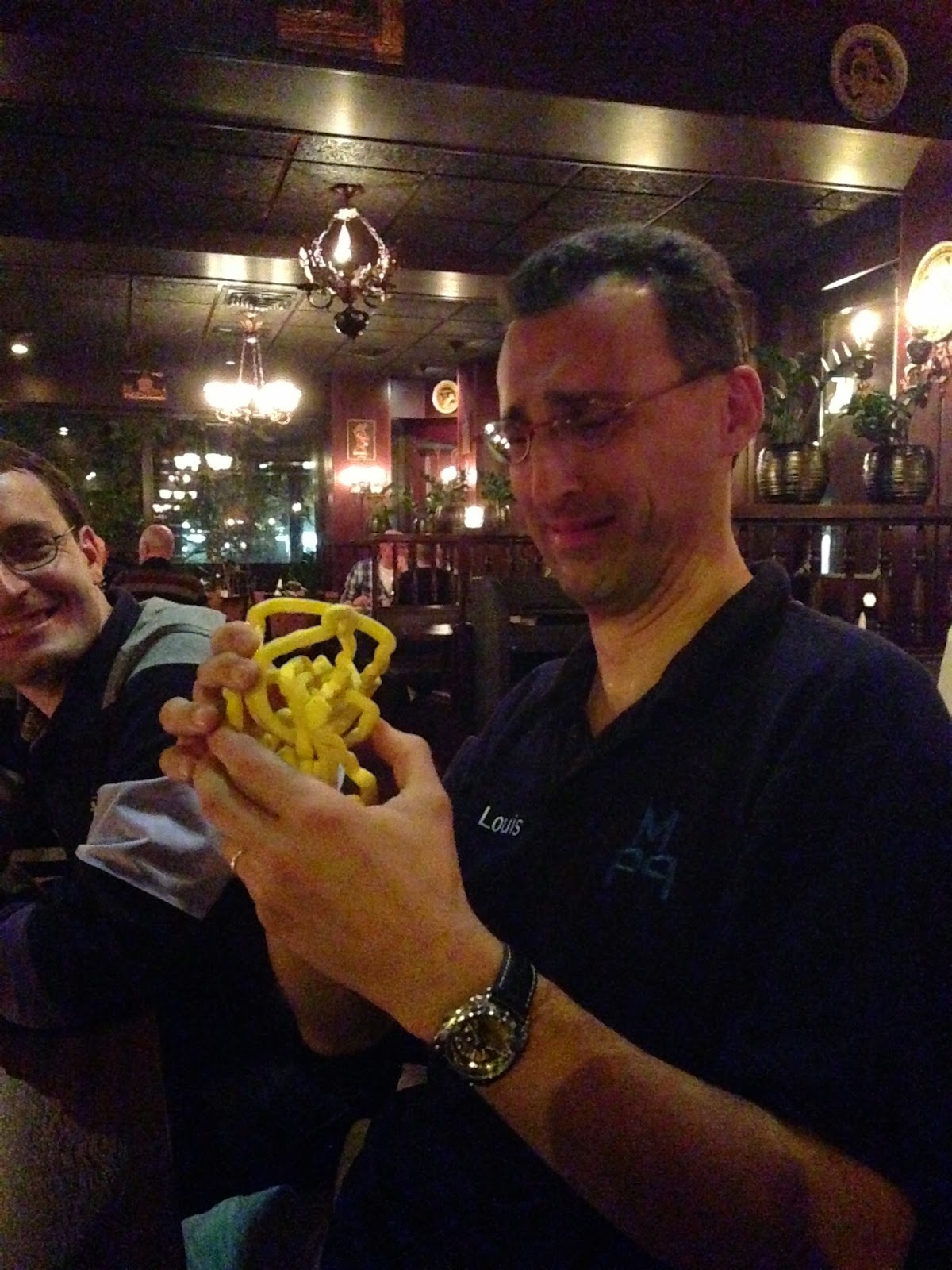 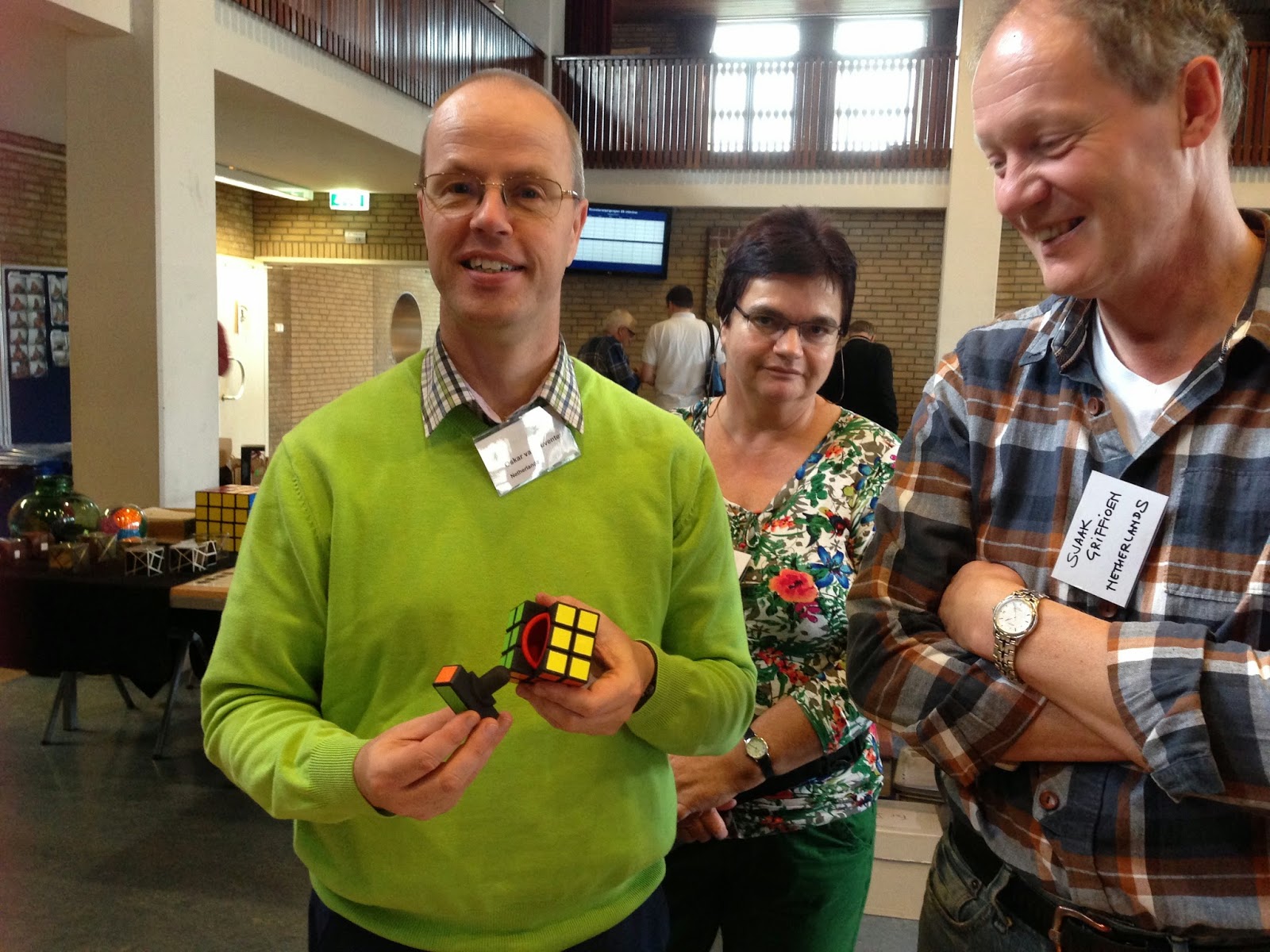 The day continued with me flipping between talking to people and selling puzzles for Hendrik.  At the end of the day we packed up the van and headed over to a local restaurant for dinner with Oskar, José, Splinter, Louis, TomZ and Hendrik.  Louis managed to get me to let him take apart Oskar's ring and ended up keeping it for a few more days before sending it back to me through the post. 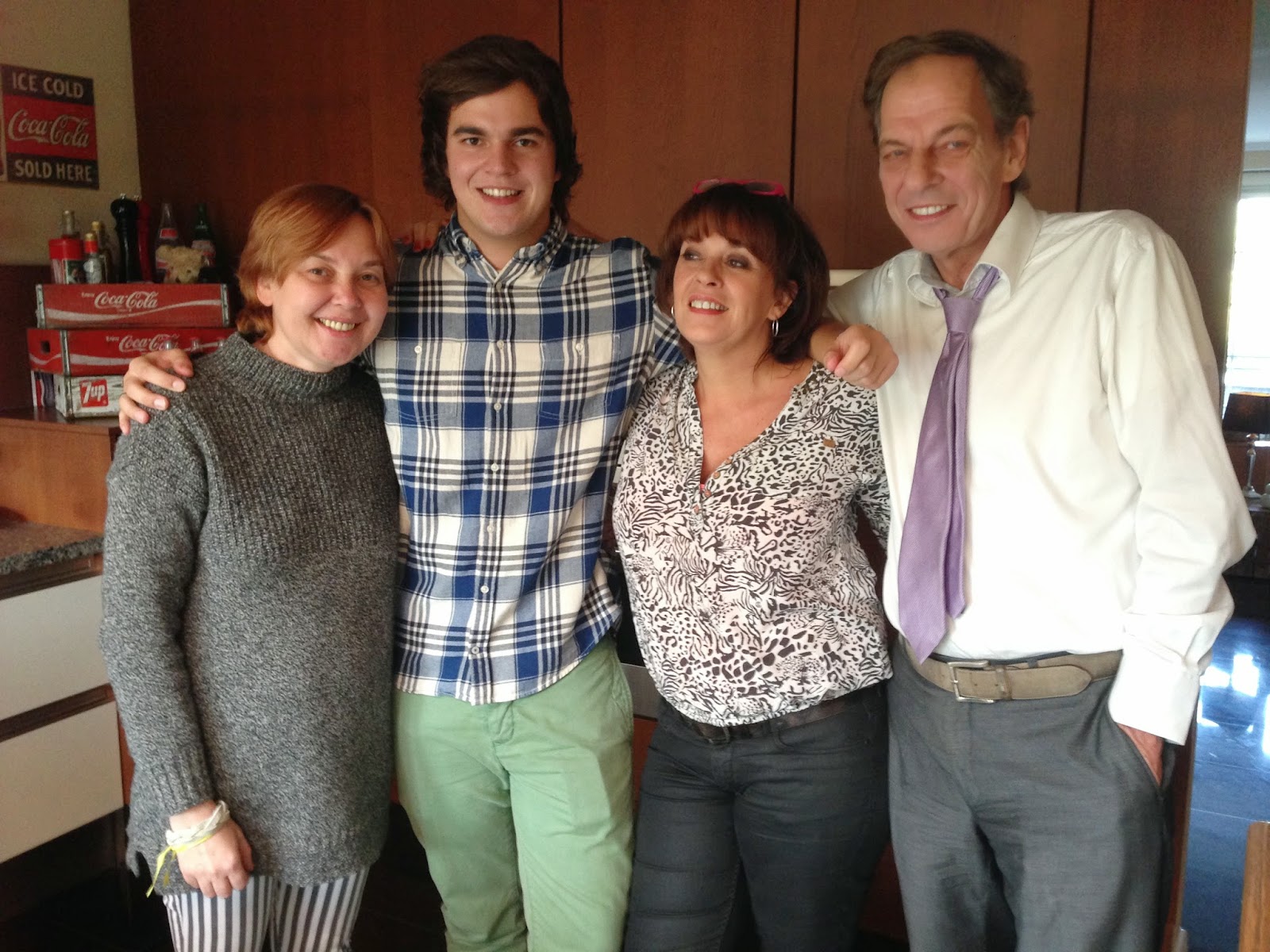 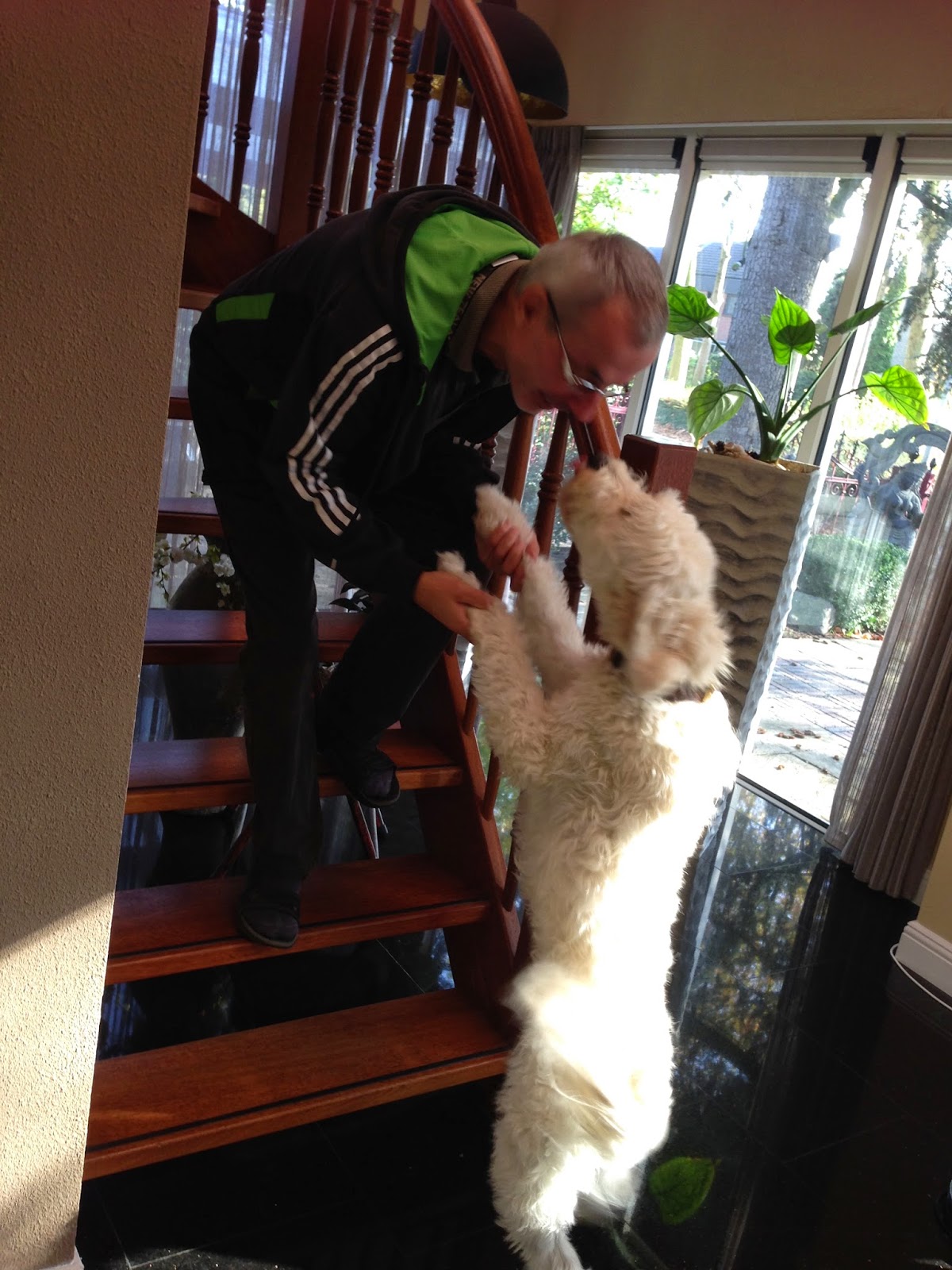 From there I was headed to Munich for more work and a bit more puzzling and to help Hendrik at the games fair.  But first we made a stop in Zwijndrecht to visit my friend Gino and his family.  Hendrik seemed to like Benz quite a bit. Or maybe Benz liked Hendrik.  I'm not quite sure which it was. It's always great to see my boy.  Next time I'll have to stay longer but even a short visit with friends is better than nothing.  Poor Hendrik tolerating me again! 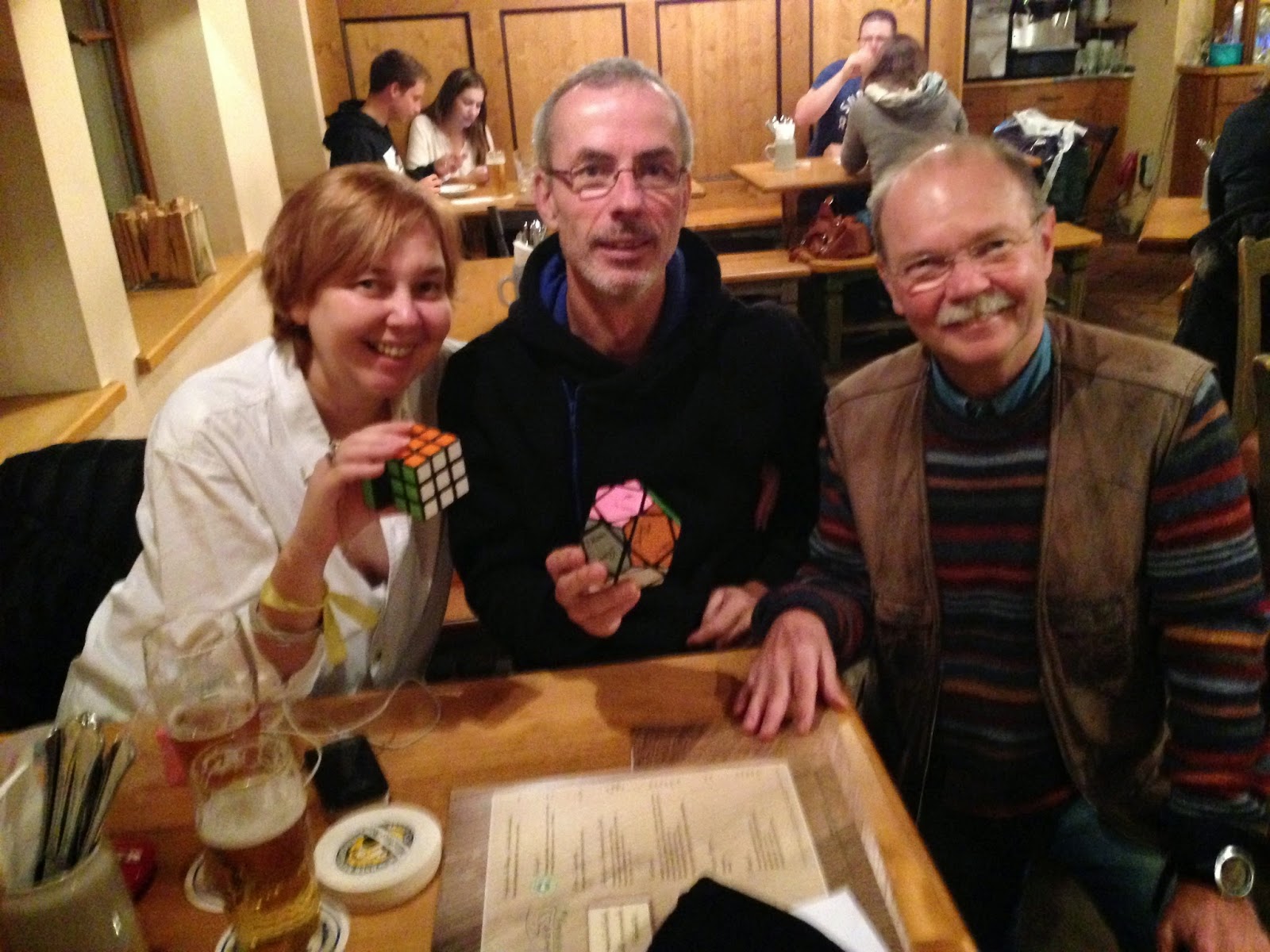 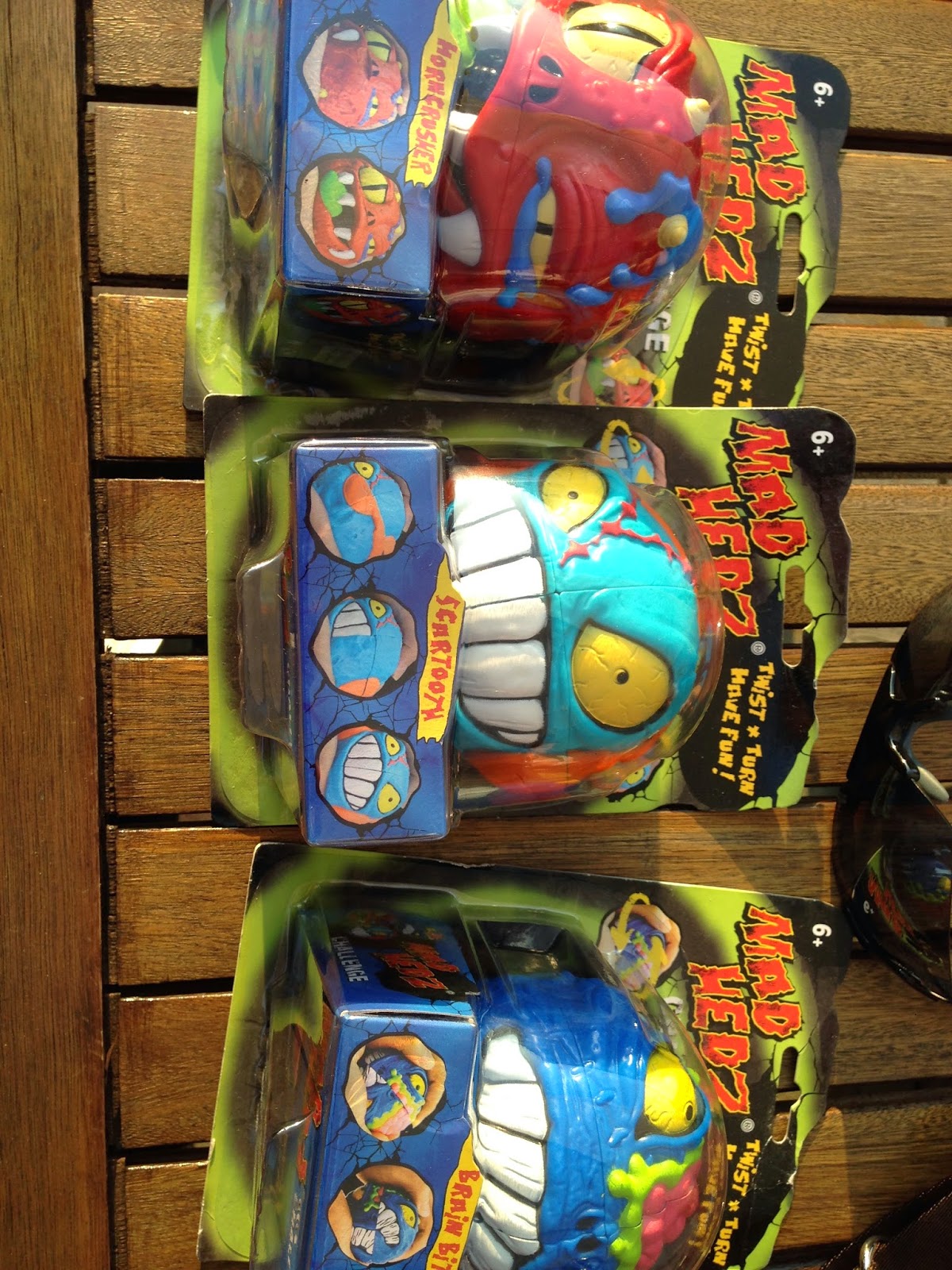 After we got to Munich, Hendrik told me he had never seen any of the city so we spent the day wandering around the central area and looking at the sights.  As we were wandering around, we discovered a new 2x2x2 puzzle and bought out the store.  I think he has a few for sale on his webpage.  That night we had dinner with Konrad and had a fantastic dinner along with a lot of puzzling.  I have now managed to meet all the TP moderators and had a great time with him.  I'm very glad he took the time to drive up to see us.

I had a great time working the Munich fair with Hendrik, although I'm sure he didn't always enjoy my company. I helped out a bit, but probably lost him sales because of my bad (read non-existent) German.  After the fair was over he told me it took him longer to set up the booth with my help than it did when he did it alone.  The fair was very different from the toys fairs here in HK.  People sat around and played games and bought the ones they liked.  That would never go down here. 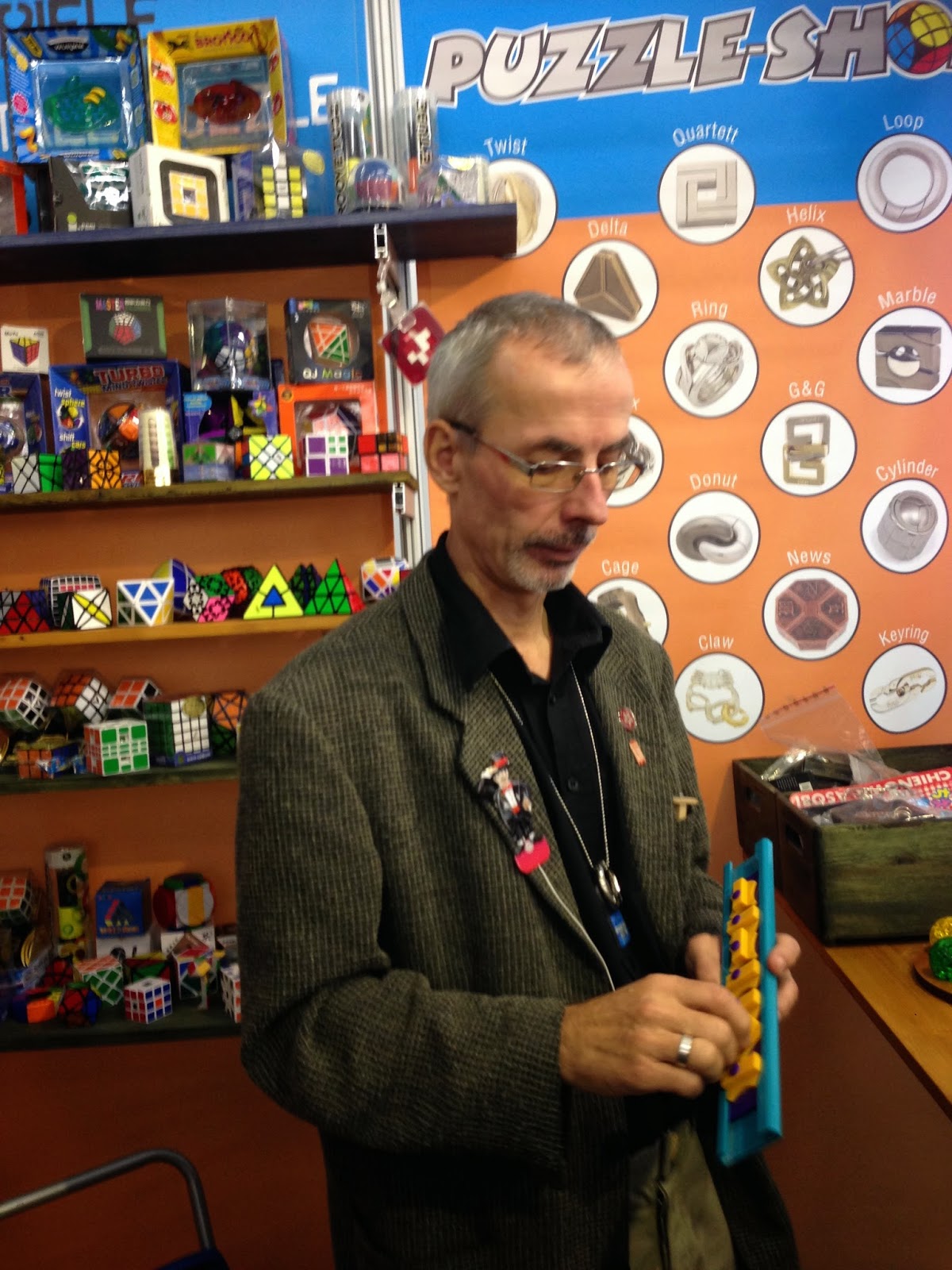 All in all it was a great puzzle/work week.  I'm yet again thrilled that I have such good puzzling friends who not only put up with me, but also embrace my little bit of crazy and still love me.  I sincerely hope I manage to make it to another DCD in the future.  I owe a big thank you to all who made it yet another special trip for me.

Posted by Roxanne Miller at 5:00 PM