A visitor, two tables, and a ship

This past week, I had a visit request on Discord from a fellow twisty puzzler.  He's from out west and his girlfriend has a mother in Boca and he's in town for the weekend and wanted to visit, and boy does this sound familiar...We are always open to visitors to the Puzzle Palace from fellow puzzlers so I said sure.  Now, this isn't the first time it has happened that strangers request a visit. But why not.  We said sure, thinking if it's like the last time, the visitor in question will come up with some excuse and not show up.  No big deal, George played golf as usual and I did my normal Sunday puzzling.  We told him that before he was able to come into the (empty) museum he had to do the following: Please come to 7923 mandarin. Outside the front doors you will find 4 sided pyramid. Take it out of the box and rearrange it into a tetrahedron and put it back in the box. Only then can you ring the bell. Failure to do this will lead only lead to frustration and inability to see the museum.

and my quest is to bear witness to the most epic puzzle collection known to man!!!
Well, much to my surprise, he did show up on Sunday along with his girlfriend and her mother. I was in the kitchen of the museum faffing about and allowed him a good 5 minutes to work on the puzzle at the entrance. To his credit, he did manage to get it out of the box, he did disassemble it, but he could not rearrange it. Given't he's a twisty puzzler, I said good job and let him in. Gage has the distinction to be the first puzzler to enter the museum and he therefore has his name first in the guest registry. I gave him a quick tour of what will be in about 3 months time, and dealt with a contractor in the garage. After locking up the doors, I had them follow me to Puzzle Palace. I gave an explanation of the driveway and the entrance mosaic, and welcomed them in. I got as far as the Berrocals in the entranceway when George came over and temporarily took over the tour while I put the groceries away. When I returned, I began speaking with the mother and quickly realized she was more interested in the architecture of the house than the puzzles so we went off on a different type of tour. In the mean time, George took the young couple on a puzzling tour of the house.
Through that silent language that only lovers have, we had mutually agreed to head off in different directions and end the tour in the mirror room. While in the kitchen, I offered Ingrid (the mother) a glass of wine because we had been discussing the difference between California and Old World wines along the way. I later offered wine to the younger ones and we sat and enjoyed the mirror room puzzles for a while. We gave Gage two puzzles to solve, Joe's head (a 2x2x2 of George's son) and the Advent calendar gingerbread house. He did both in no time at all.

By this time, we had been touring for around 2 hours and I knew my lover must be starving so I did as I always do and invited them to have a simple lunch with us. Over lunch, George had me bring out Blockistry and they enjoyed solving a puzzle or two. All in all, we enjoyed a rather nice visit and would welcome them into our home again. I hope on their next visit to Boca the museum will be up and running. As always, when they left we had them open the treasure chest.
On to my puzzle of the week. This time I have chosen two puzzle tables that we have purchased. The first is a White Rhino that we purchased from Alibaba. This was a impulse buy and I'm glad I am so impulsive. It's such a cute little table. Easy to put together. I'm sure if I can do it, anyone can. The cost? $195. It looks adorable in the Library next to George's nap time bean bag chair. 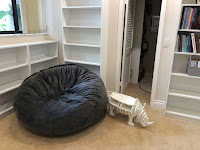 Our next puzzle table was a kickstarter that I purchased sometime last year, to be delivered in January. Like many things during the pandemic, these were delayed and just arrived this past week. Cost? $158. Not bad for a table. I had originally planned to put it in the Puzzle Palace, but the place for it is now getting a custom table to be unveiled in October so this table now resides in the master bedroom at the Museum.
And now onto a ship (and the weekly museum update). I've been watching the NYK Nebula for the last 20 days. On Tuesday in the wee hours of the morning, it left Halifax Canada on its way to Miami. The wait was killing me. I watch it go out into the ocean and then just poof! It's gone without the paid satellite subscription. Then the next day it shows up again near the coast. The wait was driving me crazy. And not for the reason you might think. Yes, I'm eager to get the shipment in, but I am also not ready for it. Friday morning it moored at Port Everglades. 1/2 hour south of here. The excitement is increasing. I keep looking at the container information waiting for it to be unloaded. It's foolish to try and anticipate the delivery date, but then, I've often been told I'm a fool. 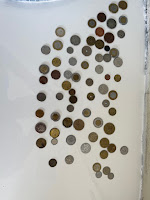 Tesla had finished installing the solar panels, but the power walls are not hooked up and we are still fully on the grid. The guy putting down the epoxy floor was an oaf and there were bubbles all over the floor on Sunday last. He came over, sanded them down and applied a new coat of white epoxy. Well, the damned things bubbled again. Monday we had the man come to lay the decals but because of the bubbles, it couldn't be done. I had to leave because I was about to start screaming at someone. George came up with a solution. We will now have a stippled effect on the floor, the epoxy fool will sand the floor yet again and put down a clear layer that can't bubble on Tuesday, and on Wednesday the decal will be placed before putting down the final clear coat. I think this is going to end in disaster but I've my fingers crossed. (I'm writing this on Monday night-I'll edit later for an update.) As it turned out, our general contractor came up with the solution. We now have a blowtorch that we can attach to our propane tank. The solution was to melt the bubbles as soon as the epoxy is laid down. Problem solved. We managed to get the garage finished before the first container arrived. Both decals have been placed in the floor along with a small collection of coins from our travels. 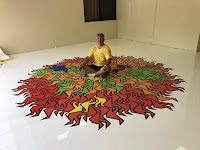 So I guess it's time to announce the winners of the competition. First is Nick Baxter. In a phone call, he mentioned to George that we should look at some of the tessellations of Robert Reid. Eureka! Why hadn't we thought of that? George then set about designing the decal and we had it printed and mounted by a company here in Boca Raton. The second decal came from our shared love of the Big Bang Theory. I have the melting cube on a t-shirt, so we decided to have it printed and place it on the floor. This was done by a company in California because we wanted it to have an anamorphic illusion to it. This company was able to take the image from the t-shirt and a youtube video and made it a 2D decal for our floor. 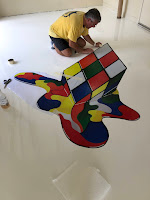 The work inside the house goes on. The ceilings are being painted, the drywall holes are being patched, and the cabinets are being mounted in the bedrooms. Once the garage is finished there are another 20 or so Kallax's that will be mounted in there. We've got a new roof going over what one can only believe was intended to be an outdoor shower. Now it houses pool equipment and the recycling containers. I'm super chuffed by the work being done by Flipping Awesome and Chilly Inc. They are an amazing group of guys who have done some wonderful work for us.
And now we wait. When will customs release our toys? When will the first batch of 241 boxes of puzzles arrive? The waiting game is the worst. Today we place the shelving units in the garage and throw the hurricane bolts for good. The garage will no longer be a garage. It is now just an extension of the Museum. Until next week...Happy Puzzling all!
Posted by Roxanne Miller at 6:00 AM