I had initially planned to write about the mega mansion puzzle this weekend but sadly the DHL truck bypassed our home and took it right back to the depot.  Instead I give you a very neat little puzzle I found on the internet called Blockistry.  I later discovered it was in the 2020 IPP design competition.  Sadly it didn't win any awards but I think it should be given a second look.

Our puzzle came in last week in rather unassuming packaging and spent the week on my desk.  George came in yesterday to ask me a question and saw it sitting there. As is his way when he wants to get out of doing something more productive, he picked it up and started playing.  To be fair, we were only waiting on that DHL delivery that didn't show up.  He solved puzzle after puzzle for almost 2 hours until we went to dinner.  He was so enthralled with this one, he even took it to dinner with us to show our non-puzzling friends. 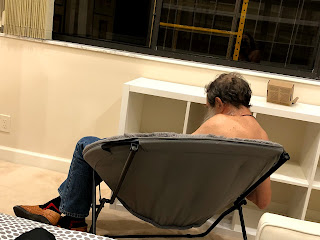 Come to bed!
After dinner he puzzled until 11 pm!  That is unheard of for him.  Even worse, he decided to forgo marital relations to solve that thing.  Upon waking this morning, he continued to puzzle until he got to challenge 48 of 54.  At this point he resorted to the solution website and learned how to go through youtube videos frame by frame. Is this cheating?  Yes.  But if you have as many puzzles as he does that there comes a point when you just have to or you'll never get on with life.  I think he needs professional counseling for this puzzle addiction of his. 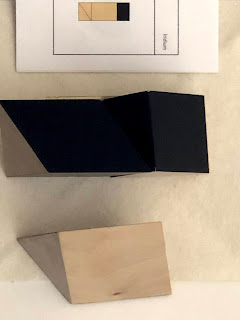 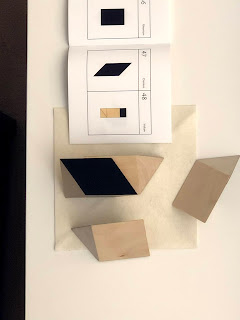 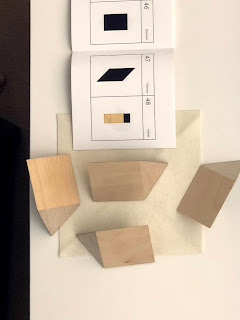 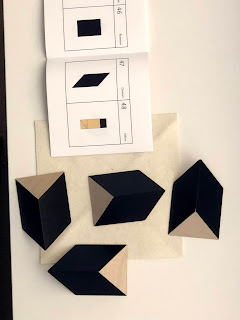 Ok.  The object of the puzzle is to make 54 different shapes as viewed from the top.  Sort of like a 3d tangram with only 4 prismatic shapes. I really enjoyed watching him struggle with these puzzles.  He enjoyed them so much he had me purchase one for his son.  The puzzle can be purchased here.  It's a fun little puzzle that I can only imagine being created in the frigid Finnish winter of COVID lock-down.  (Ok, OK, I know it had to be invented before then, but it makes for a good image.) It was developed in Pieksämäki Finland, only 1 hour due east of where I read for my PhD.  George and I spent a very cold week there in November of 2016.  Note to self, while I love visiting Finland, do NOT go there in winter.

And now for the news that you have been looking for.  The first ship is on the way.  I've been following it all week using the vesselfinder webpage. The first ship is the NYK Nebula and is now in Rotterdam.  It is expected to arrive in Miami on the 15th.  The second ship the NYK Daedalus which is scheduled to arrive on the 25th.  It's still on it's way to the UK.  How appropriate is the name of this ship to bring over the puzzles.  Daedalus was a puzzle builder of sorts when he designed the labyrinth for King Minos of Crete. Let's hope this ship sails better than his son Icarus did.

Tesla has moved the start date for the solar installation to Tuesday which of course moves the garage floor mosaics back and the installation of the final shelving units back.  Not a good week is it?

But on a brighter note, the Puzzle Palace landscaping is finally done.

Email ThisBlogThis!Share to TwitterShare to FacebookShare to Pinterest
Labels: Blockistry