While our first day was amazing, the second was even better.  We woke in the morning around 8 to the sound of birds and a cool breeze blowing through the windows.  Have I mentioned how much I like to have the windows open rather than to have an A/C on? There is nothing more wonderful to me than the feel of that and the noises of nature outside the window.

We have been given permission to visit the castle and look at anything we want during this time.  We waited for the appointed time and headed to the "attic floor".  This area is so called because the beams are rather low and one needs to duck to get under them.  I took an inventory of issues I saw and made a list of repairs that need doing.

We then met with the electrician who comes with the place to see if the rental car would fit in the carriage house.  It does and we are thrilled.  This will allow us to park a small car there in future.  For now, we’ve decided to just rent the vehicle for the three months we are here.  Italian bureaucracy is incredible!

Opening the carriage door is not for the faint of heart.  There are 11 steps to get it open.  In order to do that, you need to get out of the car, go around to the opposite side of the castle, use two keys to open that door, walk down through the dungeon to get to the inside of the garage.  Once you have done that, you can then manipulate all the rods and levers to get it open. Now this one swings in instead of out, but there are three panels, so one has a nice set of heavy hinges and folds in on itself so you can fold it around the car to reclose it. The back wall of the garage has been dug out and reinforced so there is enough room to hold a smaller car.  Our Tesla will never fit.  As it is, I have to fold the mirrors in to back in the VW we are renting.

Back to the doors.  Once you have backed the car in (safer than pulling it in forward because I’ve noticed the Italians have a thing about not staying between the lines), you need to go through the 11 steps in reverse to relock the door, go back through the dungeon to get back into the living quarters.  God knows I’ll get my steps in in this home.

After our tour of the upper floor, we decided to have some lunch.  George is suffering greatly from jet-lag so I decided to go to the local grocery and get some stuff for sandwiches.  Big mistake!  Or rather, a valuable lesson learned.  Bread, 1/2 a head of celery, a tube of anchovy paste, 4 slices of ham, 8 slices of packaged cheese, one tomato, three carrots, a tiny jar of mayonnaise, a tiny jar of mustard, a small container of butter, a container of cream cheese, a bottle of tea, and three beers came out to over 50 Euros!!!  Right, I’m not shopping there again.

After lunch and George’s nap we decided to go to Perugia to open a bank account and get some sim cards for our spare phones.  But first, I saw the gas tank was almost empty.  We pulled into a station and filled the tank.  It took €0.78.  What?  The tank was full, but the needle didn’t move.  We went to another station and had the attendant look at it but all he did was spill gas on my foot and shout something about gas farts at me.  Now if anyone reading this is more clever than we are, you will realize that my translation was not only off, but so was my brain.

The car has a little plug on the side of the gas tank that we thought was in need of opening so the gas tank could fart so we could add more gas in the tank.  Now I found this entirely plausible because George farts a lot and he can’t eat if he’s full of gas and needs to fart.

After much frustration I googled "how to put gas in a Volkswagen Up Eco". What did I discover?  It really does run on farts! The car uses methane.  Who knew?  And why is there a small tank of regular gas in the car? But most importantly, why didn’t the rental agency tell me about this?

Crisis averted.  On to the bank and sim cards.  We opted for phones first because we would need to make a lot of calls in the coming days.  We spent over an hour there getting 2 sim cards.  I wanted to put them on autopay, but in Italy that is only allowed if you have a bank account.  And here we go….

You can only get a bank account if you have the tax code.  You can only get the tax code if you get the residency permit.  You can only get the residency permit if you have a long term visa.  You can only get the long term visa if you stay for more than 3 months and if you go to the local consulate in your home area.  Which in our case is back in Miami. So how do I pay for this number you ask?  Well, I do a monthly recharge using my credit card.  So why not put it on autopay? Again, bureaucracy. Only bank accounts can be on auto pay.  Fine.  I will just have to remember to go to the tobacco shop each month to pay the bill until we leave.  This is only a problem in that we wanted to keep the sim cards and our phone numbers for when we return in April.  I was just going to have 2 phones.  So much for best laid plans.

By this time the banks were closed, so that was a bust even without the paperwork.  It was getting late so I decided to head back home again and freshen up before dinner.

Once we got to the castle, I saw a parking spot and decided to take it.  Little did I know  that I wouldn’t be able to get out of it.  When I tried to move the car again, I couldn’t get it out of reverse. I got frustrated and told George to do it.  What did he do?  Put it in first and move it inches from the castle wall!  Now what?  Again, we walked away for a while.  Went around the other side of the castle, used the two keys and entered.  After a while, I went to move the car again.  Guess what?  To put it into reverse, you need to PUSH the gear shift down then over!

We went to dinner at a local restaurant and were asked if we would mind sitting on the balcony.  Sure.  OMG!  The view!  This is my new favorite spot.  We were overlooking the lake in the distance.  It was simply stunning. 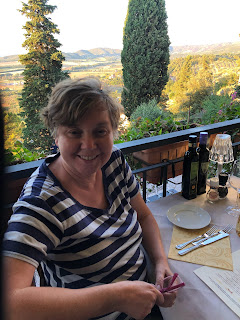 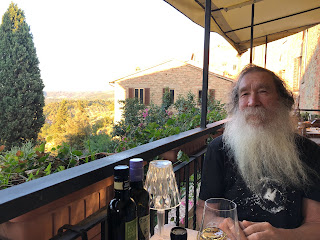 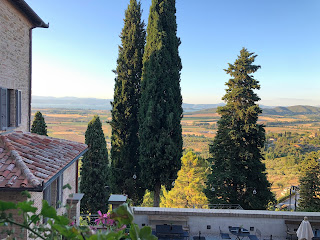 Our meal came to the table and was spectacular.  We both opted for a truffle covered carpaccio.  I had pasta with truffles for my main and George had wild boar. 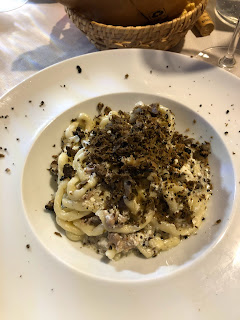 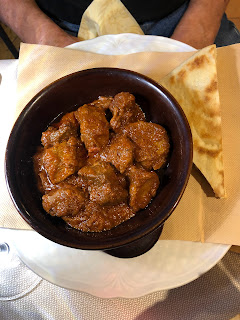 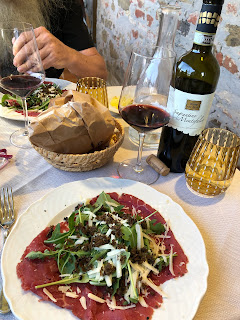 Not much truffle there is there? Midway through we switched.  I was told this place was good, but more traditional and the meal didn’t fail to stand up to the reputation of the place.  The wine was hearty.  It was earthy, full of tannins and had an after taste that lingered.   (Bill, this meal cost us $100.  The price of a decent bottle of wine in Boca.) In the background we could hear Jazz music playing out on the square.  It was a simply perfect evening.

For some silly reason I decided now would be the best time to tell George about the most romantic evening I once had with a former partner while in Italy.  This happened so many years ago and I’d forgotten it until the view from this balcony.  Thankfully we have such a good relationship that he didn’t get upset.

When my beautiful lover and I were returning to the castle we had to walk through the square.  What a wonderful event we happened upon.  There was an opera in the square.  5 singers and a pianist. 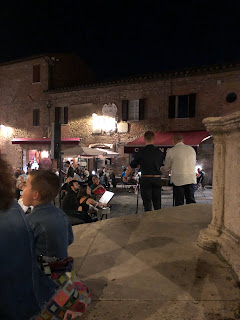 It was beautiful!  I have a thing for opera and violin music and if I hear either I simply must stop and listen. We found a seat on the edge of the fountain and stayed for the remainder of the evening.  We were wrapped in each others arms flitting between laughter and crying.

When the show was over we told one of the altos how much we enjoyed the performance and couldn’t wait to have them practicing in the castle next month.  Walking home, I held George’s arm tightly, gave him a loving kiss and told him he out-romanticized that other night long ago in spades.  This was the perfect end to a perfect evening.  Once again we returned to the castle to fall asleep to the sounds of the insects and the gentle breezes drifting through the windows.

Now I know dear reader that you are all laughing at how dumb I really am and I’m sure I will never live this down should my father get wind of it, but in my defense, I’ve not driven a standard in over 30 years and I have never driven a car that needs to fart!

Email ThisBlogThis!Share to TwitterShare to FacebookShare to Pinterest
Labels: gas, Move to Panicale, opera on the square