Another long over due post.  We’ve just returned from our around the world trip 3 weeks ago and have already had 2 puzzle "parties" and Jenny and Brian return to do more filming of us.  To top things off, we both came down with COVID despite having been vaccinated and twice boosted.  George has recovered fully, but I still have a barking cough that I just can’t seem to shake.

The first weekend we returned home Tanner and his lovely family came down for a visit.  I had planned to have many more people over but darned if I didn’t get COVID on the way home.  Bill and Scarlet came over for a while, and we all had meals outside.  I stayed in the big house while everyone went to the museum as I didn’t want to get anyone sick.  As luck would have it, Both Tanner and his wife returned to Texas with COVID.  Tanner puzzled quite a bit and we gave Jessie the car to go to the beach and to Butterfly World with Miss Geneva.  It was a lovely weekend and I sincerely hope that we can make it to their place in Texas on one of our return trips. 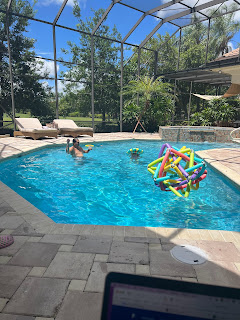 During their trip here, I managed to get all of the packages that arrived during our six month cruise unpacked.  That was a monster task! 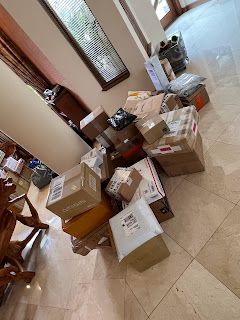 The following Tuesday Jenny and Brian returned to Puzzle Palace to take some more video footage of us and the puzzles.  We had a full 5 days of "work" and no play.  Bill and Scarlet came down to be bit actors in the production and we ended up having a very fun evening. 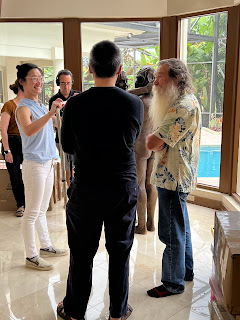 At some point the weekend before Richelieu was taken apart and finally cleaned.  They wanted us to reassemble him.  What a disaster. He’s still in pieces, and just as stuck as he was before. 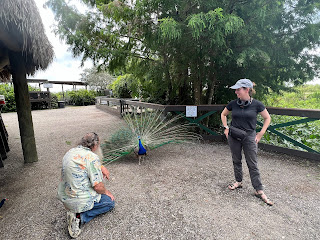 The weekend after that, I was still coughing and sputtering, but we had a small final puzzle party.  George and I handed out Boca Bash t-shirts to any who hadn’t come before.  Why not? We have around 30 of them left that will never be used again.  Tye, Brent, Bill, Scarlet, Matt, Mat, Brian, Tevin and Morgan all came down for at least one or two days.  The folks from further afield stayed through Tuesday morning. 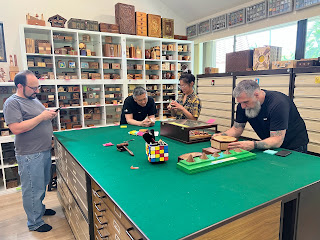 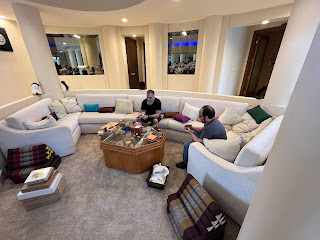 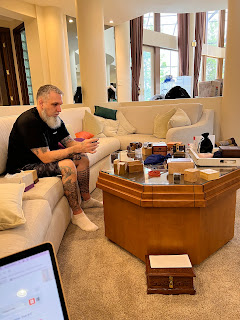 The highlight of the weekend for them was of course to puzzle, but for us it was to empty out the workshop.  Now this is how things worked out.  Mat got the CNC machine in trade for a couple of tables, and a lifetime worth of new puzzles.  Bill and Scarlet got the laser cutter and a bunch of acrylic that was above the clothes in George’s closet. Then Tye swooped in and took all of the rest.  Eventually Tanner will return to take the saw stop, or hire a company to bring it out to him.  Our workshop is naked. It is sad to see the place so empty but we will rebuild again in Italy.

While all of this was going on, we put the museum up for sale and have only had one looker.  The realtor we hired is terrible but thankfully we only gave him a short contract.  When we return from Italy we will get someone much better.

After everyone left, we set to work.  The first thing we had done was to remove the lovers and have them crated.  It was such a sad day to see them come down.  Our plan when we arrive in Italy is to have them permanently placed on a marble base once we find a place for them to live. 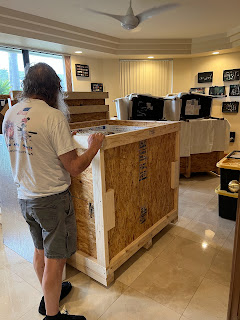 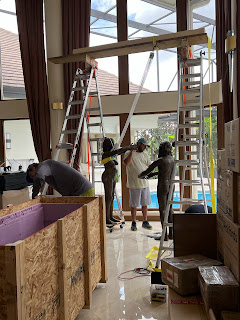 After about a week, the guys had all of the root room furniture, George’s nylon printer, the Sisyphus tables all of our bathrobes, the stuffed monkeys, most of our bedding and a heck of a lot of puzzles packed into crates.  Our void is now a massive storage facility, as is the front bedroom and the root room. 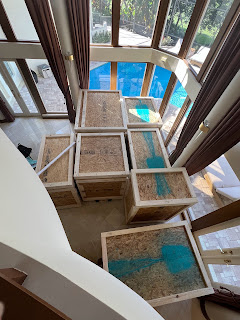 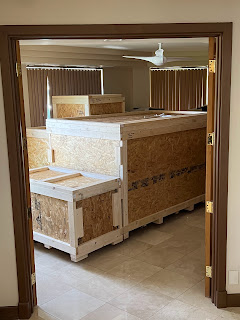 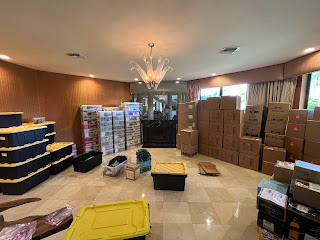 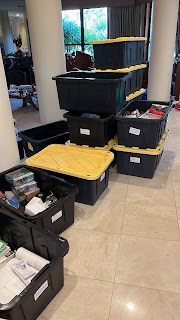 While all of this was going on, George emptied out the bridge and the dormitory.  I got 22 years of IPP puzzles packed before I ran out of storage boxes (which of course finally arrived yesterday) before starting on the mirror room.  We are in full swing on the packing, but sadly have to leave it all behind as we are leaving on Tuesday to go to the closing of the castle! 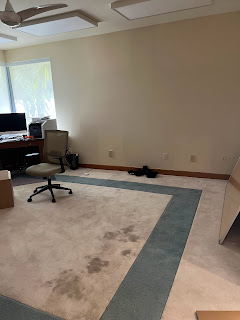 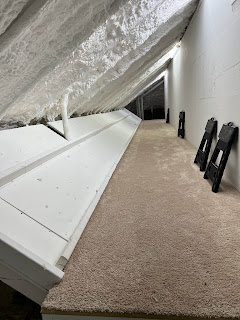 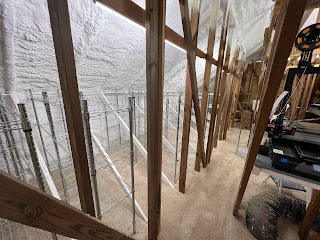 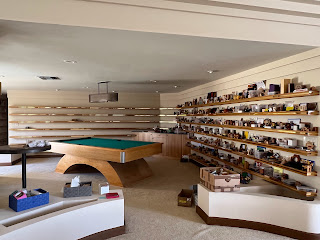 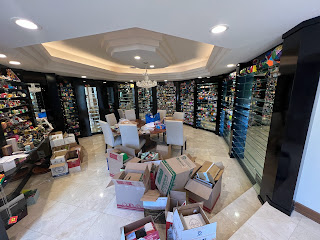 This is an overwhelming time for us and a monumental task.  Thankfully we have good friends and have hired good help over the past year or so.  The gents who installed all of the shelving for us are now packing up all of the puzzles in the museum.  They will do a much better job of it than the moving companies around here.  Their work is amazing because they of course are amazing men.

And finally, this past weekend we moved our youngest into her own condo.  She’s now an official mortgage holder and a real adult with real adult bills and all to prove it. 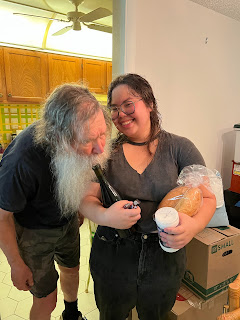 Saturday we took her and her stuff there and Sunday afternoon mom went down and helped with her organizing of the house.  The poor kid hasn’t got my skills, but she’ll learn. 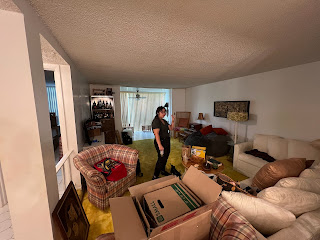 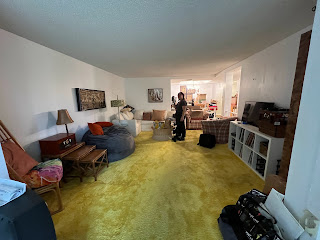 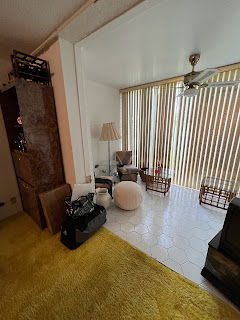 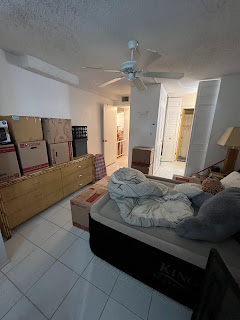 It's been a very busy time for us this month since we returned home.  I hope to get back to regular blogging in the near future.

George and I are planning to have a mosaic similar to the one we have at Puzzle Palace installed in the castle entry. We don't know what to call it though.  Any and all suggestions will be appreciated.  Puzzle Palace Castle? Puzzle Castle Museum?  Something similar in Italian?  The floor is open. Send in your ideas.

This COVID is nothing to sneeze at.  I wouldn’t wish it on anyone.  The cough keeps me up at night which in turn makes me feel tired during the day.  And now I’m off to pack clothes for our trip.  See you all in Panicale!

Posted by Roxanne Miller at 6:49 PM