I do. More than one as it happens. To be honest, I have too many to count so I've decided yet again to write about those that I have on hand. (can we see a theme developing here? When Rox runs out of puzzles on her shelves....the blog may end. Just kidding) 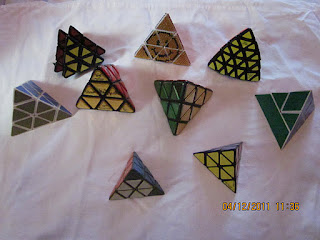 Ok, so what have we got here? Well It looks to me like 9 different puzzles. All pyramids and essentially the same. There. Done with post. Nah! I wouldn't do that. That would be just mean. Ok, back row in that photo are a prototype of a Meffert's Vulcano, a Rasta pyramid that I made with stick on jewels, and a Professor Pyraminx.
Middle row: 1980's sphinx puzzle (The KO of the Meffert's with the gold stickers), a 30th anniversary, 25th anniversary, and Jean-Marc's pyraminx (bacon is it?)
Bottom row: Eastern Bloc 3/4 size complete with missing tiles and a SmaZ edge turning pyraminx. 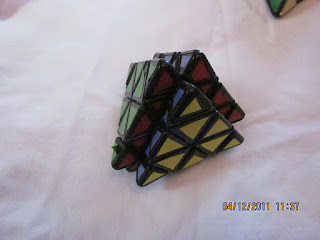 So what if anything is different about these? Well, The Vulcano besides having an odd spelling is an odd sort of puzzle. Those edge bits-they get mixed up. so instead of having just the pyramid shapes to worry about during solving, there are now extra bottoms or sides to fix. A headache to say the least. This one was made by Timur who seems to be making a lot for Uwe as of late-with more to come I'm sure (meow!) The Professor pyraminx is also made by Timur, and it is huge! Well no, not really, see Uwe has this thing about volume. He's making all his pyramids have the same volume. I don't really understand that, but I'm sure there's a math geek out there somewhere that can explain it to you if you really are interested. The professor Pyraminx isn't that much harder to solve than a normal one. Ok, there are two more layers, but really that just means 2 more bits to think about. 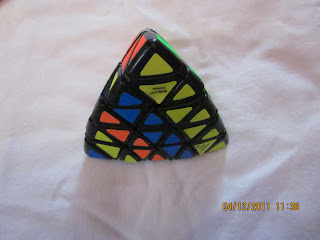 The real fun comes in the middle row. The 25th anniversary pyraminx has metalicized tiles on it. We've seen those around for at least 5 years. The 30th anniversary ones have a spongy type time on them, and the logos are embedded in the plastic itself so they won't rub off. I like that bit of it. That gold stickered KO from Taiwan...I searched up and down for one of those. It only took me about 20 years to find one. Now I know you're thinking WHAT??? But seriously, I kept getting outbid on them-I mean, I do have my price point, and for a KO I won't go over that. So there we have 3 bog standard pyraminx's. 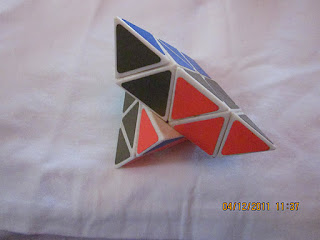 Why do I like these? Well they talk to me. This has got to be the first puzzle I have ever had that talks to me. And it doesn't matter which pyraminx it is, or who made it. That puzzle just loves to chatter. Now I know you all think I've gone round the bend now, but that's not the case. It's a simple matter of I have never learned how to solve the puzzle. Or should I say I've never memorized a solution to the puzzle. I guess anyone can do that and once you solve it, the fun is over because with a memorized solution you can do it again and again and again. with this one? I can't. Or should I say I won't. I did that with the helicopter cube-was chatting with a friend and as I was talking him through some moves, I realized I stumbled upon a memorized solution. That was about a year ago and I haven't picked up the helicopter since.

oh, back to talking puzzles. Right. I don't know how to explain it,but they just kind of let me know what needs to move where next. And yes, it takes me 10 minutes or so to solve one. But back to these puzzles. The last one in that middle row was a gift from a friend. It's not super difficult. He's bandaged a few bits here and there. It's more difficult trying to work out how to mess the puzzle up to be honest. But this one sits front and center on my shelf because he made it for me. And it's one of a kind. It doesn't get any better than that.

This one has a completely bandaged row, and some bandaged corners on it. A nice fun little puzzle filled with Love! 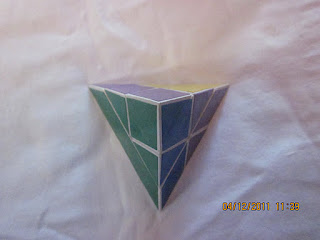 On to the bottom row. The Eastern Bloc puzzle I won on eBay. Where else? But the seller very conveniently left off the missing 3 tiles. I wanted the puzzle and couldn't get my money back on that one. Live and learn. I've never bought from that country again. 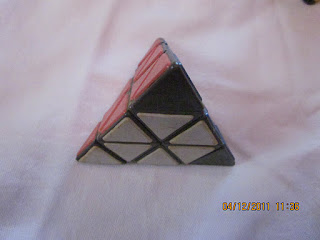 Ok, last one. SmaZ's edge turning pyraminx. Actually, it really isn't his. It's Aj's and DDR's. But who's going to tell on me. I played with theirs in GZ October 2010 and wanted one. I asked SmaZ, he asked AJ, and I got my puzzle. Nice ha? So how does this one work. It's a mess. But fun. Very hard to solve really. I know SmaZ used 3 floppy cubes to make it. As with all their work, this one is hand made. Other than that? I can't tell you anything. Will he make more? I doubt it, he said it was a pain. But then that is what I am so I know he didn't mind too much. He's used to my odd requests. 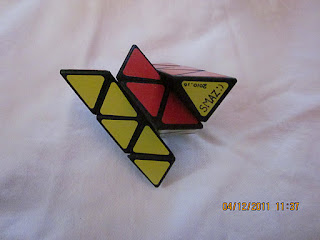 Have I given you enough pyramid power for one night? Ok then, I move on. It's Christmas! I want to point your attention to a great website that has an annual free puzzle advent calendar. (You might even wonder what those others are all about, and if you like what you see, well the subscription isn't all that bad) You won't be disappointed if you head over to PuzzleBrains I've been getting the magazines since they started and have enjoyed every second of them. (even the bits I didn't finish) Don't tell Scurra, but I think he's not such a bad bloke after all. I mean, he entertains me for hours on end so he can't be all that bad. Loony maybe, but bad? Nope!

And for those of you who are dying to find out, I managed to find some glue! Thank goodness for a bug and a husband who understand Roxese. The broken puzzle is now on the mend. In the morning I should be able to try and solve it again.
Posted by Roxanne Miller at 10:03 AM