I was going to write this as a reply to my last post, but I've decided it needs a posting all his own.
I bring you one of the hardest puzzles I've ever dealt with: Mr. Man. 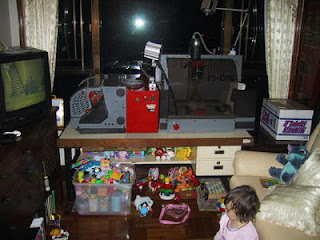 That's the living room!! Thankfully that big one is gone, but now he has a couple others in there. Some drilling thing, and a small one that looks suspiciously like a mini-table saw. I know there is a lathe on top of the China Cabinet. And the little room divider cabinet? It used to house crystal, now it is chock a block full of man tools. While this might sound terrible to most, it isn't as bad as that CNC machine was. These man tools are all hidden under cabinets and behind closed doors. They just take space that is better used by things like dishes and vacuum cleaners and puzzles...

He isn't allowed to use them inside the house, and thankfully he agrees with that rule. Dust, flying debris, the smell...Yuck! But he does play quite a lot on the balcony. He has this thing out there in the cabinet that he burns stuff in....copper wire, aluminum. Creative fellow has gotten tired of replacing toilet seat hinges (bug was too short to see in the mirror so she would stand on it. Now at 10 she still does and kept breaking off the hinges-oh, and Miss. N. is only 4'11" ...) so he made those out of aluminum. Anytime something that takes a lot of wear breaks and he can make it, we have to save the cans for melting.

Mr. Man really is great. Seriously. (Wouldn't you be if you had such a tolerant wife?) When we redecorated, I wanted another bunch of shelves for more puzzle display and he built them. I worried about those poor toys that are out on the balcony, and he built an even bigger "storage box" under our bed. He's taken by the Hanayamas and any heavy metal puzzles, wood not so much. BUT after was I woke up and saw Neil's post this morning, he might just like one of my wooden Christmas presents after all.

At IPP30, he met Stan Issacs and I've got to say I adore that man! Stan handed Mr. Man a Hanayama puzzle and it kept him entertained for a few hours. During the Awards Banquet Mr. Man and bug had enough so they headed up to the room. A little while later they came running back down to show me this: 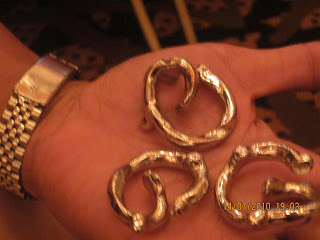 He had solved his first ever puzzle! I can't say he's hooked on them, but I can say he enjoys a good Hanayama every now and again.

He's a tolerant bloke too. I spend a lot of time playing with my toys, and I never get a nasty look or a word from him about it. (OK, almost never. When I'm complaining about deadlines and I'm puzzling the night away...) I have dinner with Uwe Meffert once a week and it's always a last minute call to Mr. Man to say I'll not be home. Ok says he.

I enjoy my boys and toys weekends across the border and again, not a peep out of him. Although in this case, I'm sure it's because I have Michael (SmaZ) to chaperone me. I spend a week at the HK Toys and Games Fair with a bunch of lads from where ever they come from-although, that gets me a "you had better not be skipping work" and a few "you need sleep or you're going to get sick" statements. And....I get to go to factory visits! But then, when BIG MAN TOOLS are involved, I invite him along. 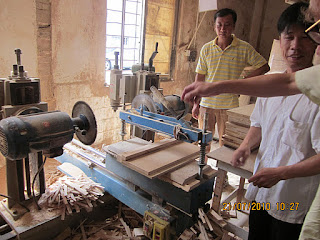 He puts up with my travel for work (free vacation for him now isn't it?) and does the recording of me and my big mouth. While there he hunts down puzzles for me and points out any new ones he sees. When he goes on his man tool hunting trips with his friends, he always brings back photos of puzzles if he thinks I may have them. If I don't, on his next trip over he picks them up for me. And family vacations? In addition to the work trips with a day or two on either side for playing tourist (and hunting puzzles), it's IPP! Not a complaint or a peep out of him. He's so much better at playing the game than I am...The trips we take with his family? I moan the whole time lousy wife that I am.

And this time of year even better still. There are puzzles under the tree for me! (ok, some I bought using his money but even so...)

Yep. I think I'll keep Mr. Man. He's a puzzle worth hanging on to!
Posted by Roxanne Miller at 8:44 PM