On the Seventh Day of Christmas

My true love gave to me
Seven wooden puzzles 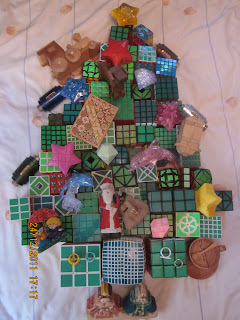 I suppose technically there are 8 wooden puzzles on the tree (I forgot about Santa) but we won't count him today. Ok so starting with the train. That was an IPP Exchange puzzle called Blocked Box 2 from Henry Strout.  This one tickled me because the first puzzle was working out how to open it. Solved and solved.  And it rolls around on the floor. Now how great is that?

There is a Japanese Kumiki dog on there and a pig of the same vein albeit made in China.  The coffee cup and spoon is caled a moku*moku*puzzle made by artbox.  None of these are terribly challenging but were fun little puzzles to put together.

At the base of the tree there are two wooden puzzles that belong to the bug.  One is a rather poor rendition of  the Hummel "Stormy Weather" figurine, and the other is a set of Japanese dolls.  Both were naked and she colored them with markers.  Sadly, these puzzles are such poor quality that they simply fall apart when moved.  Both usually sit on her puzzle shelf all the way to the back and rarely move.

The final one is a trick opening card case. I bought this in Japan a few years ago and finally decided to use it on my last trip.  (Asians and business cards-they just go together so I thought I'd use a pretty case, and have some fun at the same time)  This one is nifty because if you slide the panel as is always first in these types of boxes, the cards disappear!  Magic!  I got a lot of surprised looks when I played dumb at that conference, and a lot of laughs when I closed it back then opened it again to take out the card.  Fun stuff.  I highly recommend this one.  It will hold around a half a deck of standard sized playing cards, so it's a bit big for the purpose I use it for, but it still works.

:-)  I had a nice chuckle today.  I was posting my annual puzzle year in review over on TP (pretty boring activity wise this year) and when I was doing so, I posted something about Dave in a dress.  Well, when I read Kevin's blog and it just plain serves me right :-)  (It's not the first time someone has said that about me Kevin.  Apparently I'm a bit too down to earth and not girlish enough.  Being called a bloke because I have a brain and like to use it. Not an insult at all!  I'm pleased to join the company!) err, people who use their brains, not blokes.  Or is that blokes?  Oh heck...I'm going back to my glass of vino!  No brains this evening.

Happy New Year All!
Posted by Roxanne Miller at 11:01 AM