Today I bring you a set of magnetic cubes. 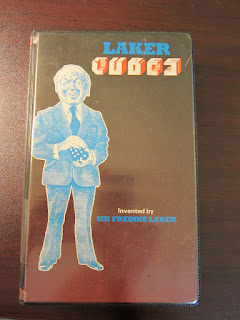 I've had these in my closet for quite some time now.  I would have to guess that I bought these pre-bucky balls simply based on the amount of dust on the cover.  And that is why I got them out.  Not the dust, the bucky balls.  I have a set or three under a variety of different names and as I was playing with these the other day I couldn't help but think I had something similar somewhere else.  And of course, I do.
The Laker cubes were made in 1982.  I simply love the warning on the back. 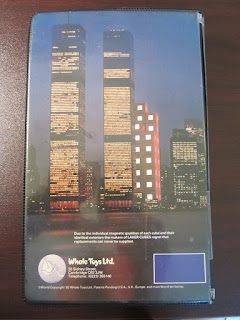 If you loose a piece you are in trouble. Or maybe that's a real nice way to Not have to deal with careless people. Tell them up front there are no replacements.

So these are a set of 27 cubes that have magnets in them. The polarity is such that it appears no two pieces are the same. The object according to the insert is to make a 3x3x3 cube out of them. Easier said than done I tell you. I fiddled with these cubes for a full on testing session and had a Eureka! Moment at the very end of the day. I managed not only to get the cubes into the 3x3x3, but also to lift it off the table. So I know I solved it. Or did I? It fell apart after about 5 seconds. 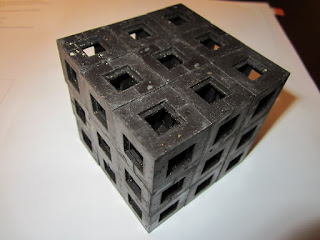 Which brings me to a question. Do magnets loose their magnetism as they get older? Are they like high school cheerleaders who spend too much time in the sun? Something not quite right after a few years, but holding on for dear life in the hopes that all will be as it once was.....Oh dear, what is she on about? Another puzzle for you all to work out...