Each of these puzzles has just been released and are being shipped out these past two weeks.  If you ordered one, you should be able to get it soon if you haven't already.  Ok, enough of the messages from Uwe. 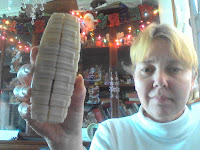 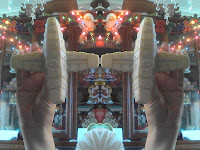 The first is the Jade Chopstics.  I had the joy of playing with this puzzle at least 2 years ago.  Ola has mentioned that it's been in the works for over 3 years, and to be honest, I wondered if it would ever be produced.  Hanayama picked it up a few years back, but to be perfectly honest, they didn't do as good a job as Meffert's did and that's not because we are friends.  There are a few differences, first the Hanayama is a 1x2x5 where as the Meffert's version is a 1x2x9.  Meffert's has curved edges, and it's got some lovely designs running around the outside.  He got the 'jade club' words along the outside designed by John Langdon, and the puzzle was named by yours truly.  I just wish Uwe would have had it done in the painted plastic as he did for the first of the Jade puzzles.  (Bug showed me a new program for taking photos so since it's christmas, I'm playing!) 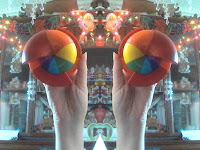 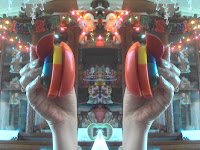 The second puzzle is the Nautilus.  This one first came out on TP way back in 2009.  Tim Selkirk was the designer and sometime during that year Geert Hellings got his hands on one and showed it to Uwe...or told Uwe about it.  Mid-2010 Uwe started asking for the address or email of Tim.  I couldn't help because he'd been off line for a while and I sadly didn't have a nautilus.  Eventually the two got in touch and we now have a new puzzle.  I said it before, and I'll say it again, it's a great puzzle to add to your collection.  I love the look of it. The rainbow is fantastic!  The color is just the best!  it's such a girly puzzle.  There are 7 colored bits on it and each of the seven segments of the outer layer move.  It's a bandaged puzzle.  The inner layer though has only one place that can turn.  It's like a square one, but it doesn't change positions of the pieces as much as the square 1 does.  It also reminds me of morph.  It's actually a harder puzzle to mess up than to solve.  When you do manage to mess it up, it doesn't take a lot to solve it.  It can be done by intuition. 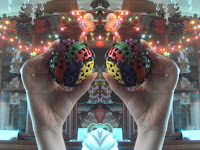 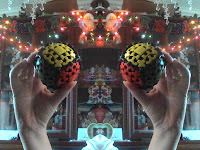 Last up tonight is the gear ball.  Uwe gives credit to Oskar for the design of it, but Oskar says he only made the gear concept.  :)  funny arguement to have.  "I DIDN'T make it"  usually it's the otherway around.  The gear ball is a dream to turn.  It just spins in your fingers.  Basically it's the gear cube with rounded edges and some little bumps added to help you turn it. I've really nothing much to say about this puzzle except the puzzle in video link has no lube inside it. It's all puzzle!

All of the puzzles above can be purchased on Meffert's.
Enjoy, Thanks for tollerating my Christmasy type photos this week, and don't forget to come back on the 26th for the 12 days of Christmas, Roxanne style.

Posted by Roxanne Miller at 6:55 AM