Toys, testing, and trial and error.

Toy: a material object for children or others to play with (often an imitation of some familiar object); a plaything; also, something contrived for amusement rather than for practical use.

-the Oxford English Dictionary
Well, today's puzzles certainly fit that bill. Imitations of other items, and something designed for amusement.
I've got two from Vesa, one from Puzzle Master and one from Derek Bosch. 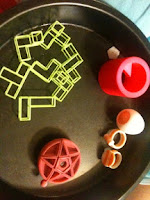 Shapeways had their annual sales recently and once again I took advantage of them. I really don't like the feel of these things, but over the years they have gotten less gritty so I thought what the heck and put in an order. Now I frequent a number of forums, and thought what the heck, I'll get them in white, buy some dye and color them myself....famous last words....

I'm not at the level of Cantonese where I can just go out into a shop and ask for dye. After many trials with this, I gave up and went for a different tactic. I tried food coloring! That I have plenty of. The results were mixes to say the least! My yellow was orange, my green was yellow, my blue was pink(!) and my red was, well, red. So maybe food coloring isn't the best of puzzle dyes. But someone had to try it! 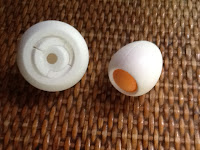 So on to the puzzles. First, I got two from Vesa: a breakfast egg and an onion. I've looked at these two for years now but always just passed them by. Well this time around I hit the purchase button and I'm glad I did. The egg is four pieces and the object is of course to put them together. It's a nifty little thing, but it is easy to spot the solution for it just by looking. To solve it I had to assemble it without the yolk (or orange?) just to loosen up the pieces a bit. A one minute puzzle but fun none the less. The onion is made of six pieces and a tad bit harder to solve but not very much harder. This one was a two minute puzzle I'd guess. These two I didn't purchase for the puzzling factor, but rather for their appearance. Vesa has designed an orange as well which Hanayama has mass produced under the name of Globe Ball. It's hard to come by now, but if you can find one its a great little puzzle as well. 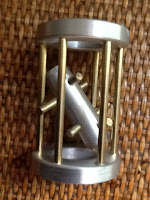 On to the torpedoes. Now this one I have many different versions of. After quite a long discussion about this the other day, I decided to buy yet another version. I'm sure I got it from Bits and Pieces during their last sale. 25% off AND free shipping! I'm in. I'll have to check the packaging again, but I'm pretty sure it's a Puzzle Master product. At any rate, it's listed as an 8/10 and that about sums it up. It's not as easy as the hedgehog and not as difficult as trying to get one of those birds out. 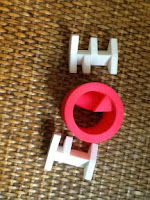 My last puzzle today is Derek's tubular burr. What a hoot that one is. I've sat here grinding away at it for the past three hours off and on and have managed to get. Nowhere yet. I see what it needs to do, I just can't get it to do it without looking. It's not a "by feel" puzzle. Well, at least it hasn't been for me. It's only a three piece puzzle and the object as always is simple, put the pieces in and take them back out again. What could be easier? (A lot of things, believe me!) This one would be a fantastic puzzle for the magpie in me! I'd love to see it made of silver and gold. Shiny smooth metal bits would make it even better fun!

This one is a bit odd. When I colored it, it got a bit 'squishy' I'm not sure if it is meant to be that way, but I can tell the area between the walls of the barrel bit are hollow. It still plays, but I'm afraid ill deform it if I squeeze too hard.

So back to my start. Toy: a material object for children or others to play with (often an imitation of some familiar object); a plaything; also, something contrived for amusement rather than for practical use. I think that definition holds. And today, we've had all three. Although I'd argue that helping me maintain my sanity through 5 hours of low level speakers is a very very practical use for a toy!

Posted by Roxanne Miller at 8:26 PM