A mini puzzle meet up

Last weekend I was in Guangzhou for a conference and you know me and GZ. You also know me and conferences. I have to meet up with some puzzlers!
Well, what a trip that was! I was with three other ladies on the team and we had a blast! The conference was really hard work. Honest it was. I'm not used to THAT Chinese accent so I had to work to understand. Since there weren't that many westerners there....the keynote, a workshop presenter and myself, I did everyone a favor and left before dinner. 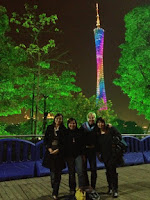 One of our team attended the same university we were speaking at so she had friends there we met up with. We girls did a bit of shopping in a place called Redtory. (I refrained from buying the RMB 4500 painting I really liked-but did pick up a bit of jewelry).  While there, I called Ming to arrange a dinner.  AJ was to meet us. By the time AJ called, we were already over at the North gate and he was at the South.  Now this was a hoot!  We were less than 2k away and AJ just thought it was too far!  He just finished the GZ marathon in November!  Lazy!

Didn't matter.  We met up later in the CBD and then headed over to meet Mr. Fok for dinner.  When I met the boys my team was shocked!  Hugs and kisses around as always.  Those girls just aren't used to Rox. 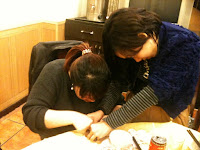 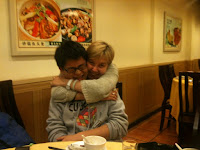 Well after a bit of a mess, we finally got to say Hi to Mr. Fok and the teacher.  Aj stayed behind to play with toys and off I went with Ming for dinner and a bit of puzzling.  Ming gave me a few chocolate puzzles and I gave him the newest Hanayama.  It was a good trade I think.  We only spent a few hours together, but it was heavenly as always!  Thank you Ming and AJ and Mr. Fok. 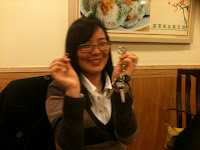 Now  my friends all think I'm a real geek with my puzzles and I don't mind that, but Look what I got them to do!  Solve puzzles.  Winnie and Tiffany went together to solve the ABC puzzle.  My RA Gwen managed it all on her own.  Michelle made an attempt, but she didn't quite make it.  (She later solved the keys I gave her the following week along with the double s)  I'm so proud of them all.  All in all, it was a great little meet up!