Dexterity puzzles and one big nut!

One of the collections we recieved was one of Dexterity puzzles.  There must be 1000's in what we have acquired.  This collection takes up most of the cabinets that have been installed in the chest room. When I first encountered these puzzles, I was not very interested in them.  I thought they were just toys to keep young children occupied.  I know I've written about these before, but the more I unbox, the more interesting they become.

The collection has a wide variety of different styles. The first of course is the kind that you need to put a ball into a hole.  These are mostly a shake and pray that it gets in the correct place.  I have rotten luck with this kind. 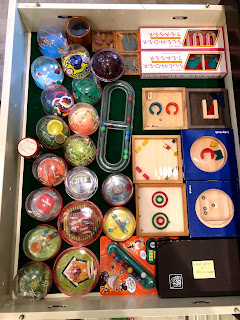 The second type are small square boxes that have different internal parts.  These come in a wide variety of styles and sizes.  These puzzles I am not afraid to hand to non-puzzlers.  They are virtually impossible to break, but if they do break, we have so many duplicates of them that it doesn't really matter too much.  (I know James is rolling his eyes at me and I can see the smoke coming out of his ears, but when I was in Asia, I literally acquired 100's of these small square cubes.) 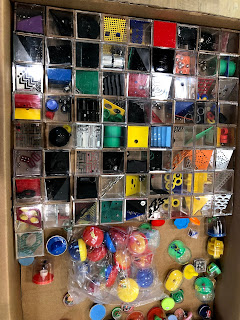 The third type is a maze puzzle that has a ball to be maneuvered through the maze. 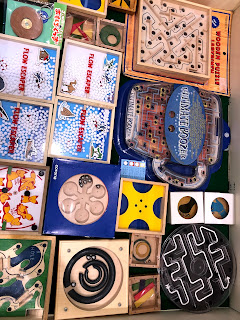 The next kind has water inside.  These are trickier than they look.  The problem with them is that some of the older pieces have lost their water through evaporation via the rubber stoppers. 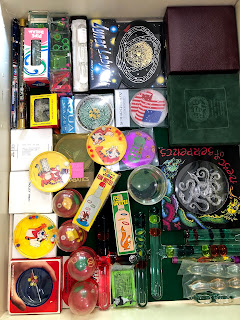 Next up is my favorite type: Mercury mazes. I remember these from my childhood and am as equally enamored with them today as I was then.  I could spend many hours just watching the mercury move around the puzzle.  Sadly, Mercury has been declared a harmful substance so the puzzles must be off limits for any visitors to the HDM Puzzle Palace Museum.

This collection is so extensive that there is no way a person could solve all of them in a years time.  I believe it would take many more years than I have left to solve each of these puzzles.  We've played quite a bit with them and find them to be a nice amusement. 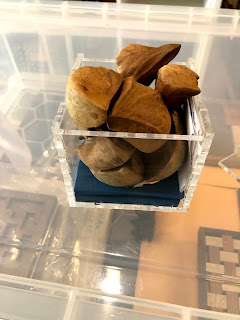 There is another puzzle that we 'acquired'.  Or perhaps I should say it came back full circle.  George got the monkey nut puzzle when he was in the Seychelles. He gave it to James when we visited after IPP London in 2014.  Today I unpacked it and it is now in the museum.  Of course when I opened it, it immediatly broke into pieces.  I spent the next half hour putting it back together again.  I know it's against my non-playing rule, but I just couldn't help myself.

What makes this puzzle special is that it is a natural puzzle.  No two are alike.  It seems to be quite hard to come by, no only because of the remote location of them, but also because they usually fall to the ground and break into pieces which makes it impossible to complete.  After doing a bit of research, I've discovered that they are also found in Singapore, the Philippines and Thailand.  I hope that in one of our next trips we would be able find a few more of these.  I would love to see one in nature and watch it cure.

Now on to the weekly museum update. The garage is completely unboxed.  All of the shelving units have been filled and the shelves around the outside of the garage are filling up nicely.  We have left the central part of it empty so that we can still park one car inside if we choose to.  Odds are highly agains this as in reality, this is now just an extension of the house.  It is all under air and I don't want to have exhaust fumes from any vehicle damaging the puzzles.  (I still drive a gas guzzling VW beetle while waiting on my Tesla Roadster to come in.) 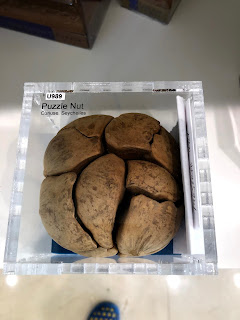 I have been like a whirling dervish in my attempt to unbox these puzzles.  I have completely unboxed all but two rooms worth of puzzles.  We still have the disentanglement puzzles to open as well as the jugs.  Other than those, all the puzzles have been opened and put on display.  This has been a true labor of love.  I wake at 7 and if we are staying in the museum I start working right away.  If we are at Puzzle Palace, I am over there by 9 and work through until 5 pm.  This has become a 'real job' for me.  One that I love much more than any other I have had before.

Next week, I'll take you on a tour of the chest room.  That should excite a few of my readers.

Posted by Roxanne Miller at 5:51 PM