Before I start today's post I want to express my apologies for not giving an update last week. My grandchildren were down for the week and I felt it more important to spend time with them than to post about puzzles.   I know you'll think that crazy but...

One of the collection of collections we recieved was a large number of French Puzzle Sets. I had managed to purchase a set myself off eBay this past spring and found it funny that we had so many arrive in the collection.  James has warned me to not separate out the pieces and I can see why.  These are (mostly) complete sets and I should hate to see them with missing pieces. He informed me that Edward attended schooling in France and began collecting them there. Since the first photo was taken, I've found 3 more boxes and ordered one from eBay.  Who knew searching for old puzzles would be so much fun. 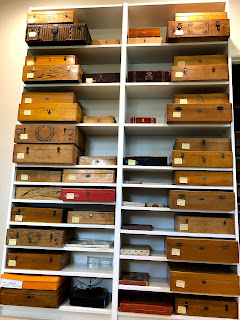 Each individual box contains a number of patience puzzles.  My research has shown that the earlier  game boxes held board games, roulette, dominoes, and cards among other ways to spend the evening.  These boxes date back to the early 1870's.  By the early 1900's, the older game boxes were phased out and the more "modern" dexterity and disentanglement puzzles were placed in the boxes. 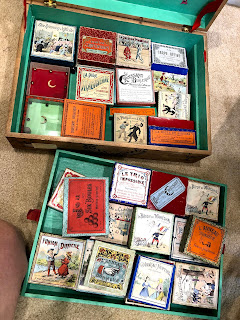 The boxes that house the puzzles vary slightly, with most being made of wood.  There are a few boxes that have a suitcase type appearance being made of either cardboard or wood covered in paper. Sadly, some of the boxes are only that.  They do not contain any puzzles. 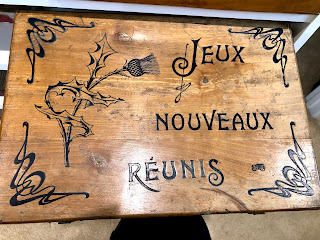 And now on to the museum update.  We have had a two week downtime while the kids were in town.  First we had the youngest daughter and her 'not-a-boyfriend' for a week, then the older daughter and her family came down the next weeks so we have been enjoying family time.
Prior to their arrival, I had managed to unpack most of the shipping boxes that said "puzzle boxes" on the exterior and posted about it in the last blog post.  While the kids enjoyed a few days at Disney and the beach, I unboxed the rest.  As it turns out, the chest room is now completely full and we await additional glass shelves so I can arrange the pieces in a less packed fashion.  Currently we have boxes on boxes and I don't like the look of that.
After completely unpacking the chest room I moved on to the great room.  This room is dedicated to wooden puzzles with one wall holding named designers/manufacturers.  On Monday evening around 11:30 pm I opened the last shipping box.  The South wall looks bare to me, but I'm hopeful the missing items that are in James' database have been misplaced amongst other puzzles.
The South-West wall is filled with Japanese Kumiki puzzles while the North-West, North, and East walls are currently filled with puzzles by unknown designers/manufacturers.  These will later be entered in the database that George is building in the hopes that we can get help identifying the puzzles. These walls all look terribly messy to me as the puzzles were just placed randomly for now.  Unboxing first is more important than organization of those pieces.
We have also decided to remove all of the puzzles from the wood room at Puzzle Palace and bring them here.  After all, the intent all along has been to combine the collections.  This will be one of the final stages of the museum build.  I've all too many boxes to open yet to begin shifting puzzles form one house to the next.
One thing I struggle with is the placement of pieces made by companies such as Dilemma, Rhombol, and Bits & Pieces.  Should they be added to the South wall?   Do the count as a 'proper' manufacturer?  I find myself thinking they are more along the lines of a toy manufacturer than a puzzle manufacturer.  I guess my bias comes from seeing these companies works in every street market I ever went to in South-East Asia.  What are your thoughts on this dear reader?