A long long time ago we went to a friends home for Thanksgiving dinner.  While there we saw a sculpture of the man of the house that was exquisite.  We enquired as to it's maker only to discover it was the grandson who produced it.  I was impressed and as is my usual way, I thought about that sculpture for quite a while.  You see, I had this idea of having a puzzle made of George and me since we got together.  But how silly is that? The more I thought about it, the more I liked the idea.

After discussing it with George and convincing him it would not only look good in the house, but would also be a good image of us as we were once upon a time, we decided to go for it. He designed the puzzle using bent wire and a string and gave it to his golfing buddy who in turn passed it on to the grandson.  Later George made a 3d printed version of what we wanted done. 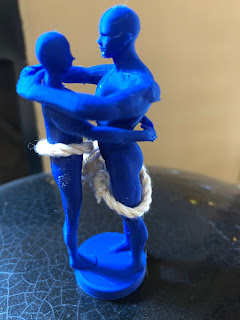 A few months later we met with the grandson (Jordan Simon) and discussed the possibility of having a sculpture made for us.  We initially wanted someone to take photos for us, but our daughter said that was just too gross, and we couldn't think of anyone else close by who would do it.  You see the artist was in Arizona somewhere and wasn't able to do it himself.  We ended up using the timer on the iPhone and had a good laugh getting the photos that we needed.

Over the course of the next year we periodically recieved update photos and were amazed at how good this artist was.  We could see ourselves coming to life in clay.  the most amazing part for me was the wire articulated hands.  He did this so he could slide the pieces in and out of each other without damaging them. 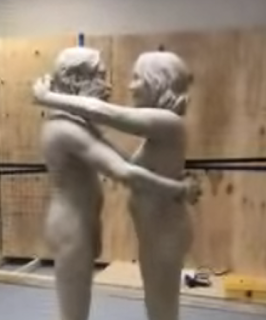 Throughout the process we recieved updated photos of the progress.  Here we are without arms.  You can see the hollowness of the pieces. 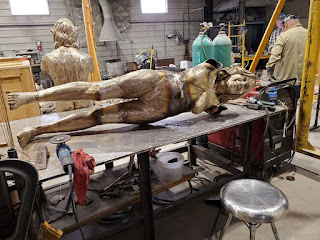 The parts were cast and the arms later attached to our bodies.  They too are hollow.  The detail in the faces is incredible! 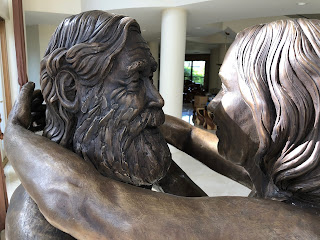 We wanted the puzzle sculpture to be in place for our anniversary but this was not meant to be.  COVID really put a damper on things.  We waited another full year, but finally The Lovers arrived in Boca Raton! This sculpture is a life-sized bronze. The only things that are different are the size of the feet for stability and the length of the fingers so they would intertwine.

They were delivered in two very large crates each weighing in at around 250 pounds. 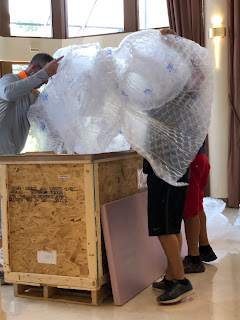 We unboxed them almost immediately, but it took another day to rig up a scaffold so they could be placed. 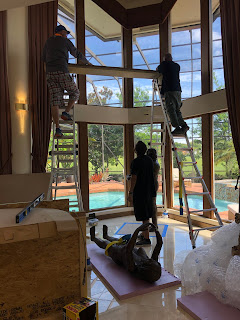 Jordan had welded four bolts to the bottoms of our feet to add steel rods to.  These were to be drilled into the floor and later epoxied into place.  George was placed in the floor first, and I was lifted above his head and into his arms. 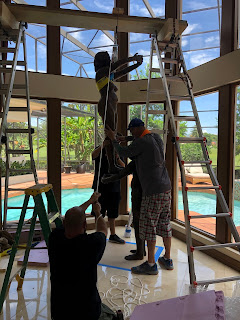 This took a bit of effort, but was finally completed and The Lovers is now a permanent fixture in the Puzzle Palace.   To quote Chris Ramsay, "This puzzle is One of a Kind.  The Worlds Most Expensive Puzzle. The Worlds Heaviest Puzzle." Seriously, it is part of a 12,000 square foot house.  You can't get much heavier than that.

They reside in the void overlooking the swimming pool.  The puzzle is to remove the rope from The Lovers. This one is a rather simple disentanglement that can be reconfigured in a number of different ways.  This is our favorite placement of the ropes. 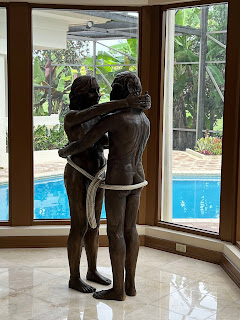 At night, they have a special spotlight shining down on them. 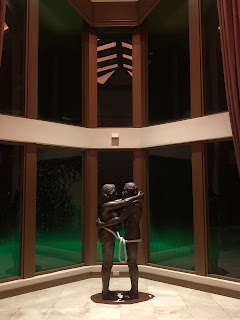 When they were first put in place, I was constantly surprised when I walked past.  I thought there was another couple in the room and I'll honestly say, they did give me a start every time I walked past for about a month. Now I'm quite used to having two people standing in that room.
I am sure I will catch a lot of flack for posting these photos, but they are a cross over between puzzles and art.  No one would say a word if it were another Berrocal.  The only difference?  You know the subjects.  It takes two very confident crazy people to do something like this, and George and I are just those people.
Posted by Roxanne Miller at 6:00 AM