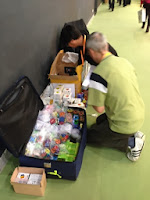 Today was the last day with Hendrik. I picked him up at his hotel around noon. I was lax this year.  Too much fun and not enough sleep as usual, but this time around the years and work were catching up with me so I had to be mature and head to the office first to do a bit of work. Our first stop was the toys fair where Hendrik and Calvin exchanged a bunch of puzzles.  I just love puzzlers.  One small carry on for clothes, one big suitcase for toys! We weighed Hendriks luggage and it was a whopping 32 kilos!  That's a lot of toys folks.
﻿
We left the suitcases there and headed out for the Hanayama offices.  We had set up a meeting for the day before, but simply couldn't make it.  When we got there, the girl we were to meet wasn't in, but I heard a voice I recognized and walked on in and said hello to Kyoo!  Surprise surprise!  I knew he was in town but didn't expect to see him.  We were shown into the conference room and let loose for a while to play with some toys while he tended to his work.  We got to play a while with U&U and learned how the idea was first conceived.  He also showed us a number of paper fastener creations he's been making. Those are pretty cool.  No two designs are the same.  Amazing when you think of it.  He explained that he can't make one a second time. 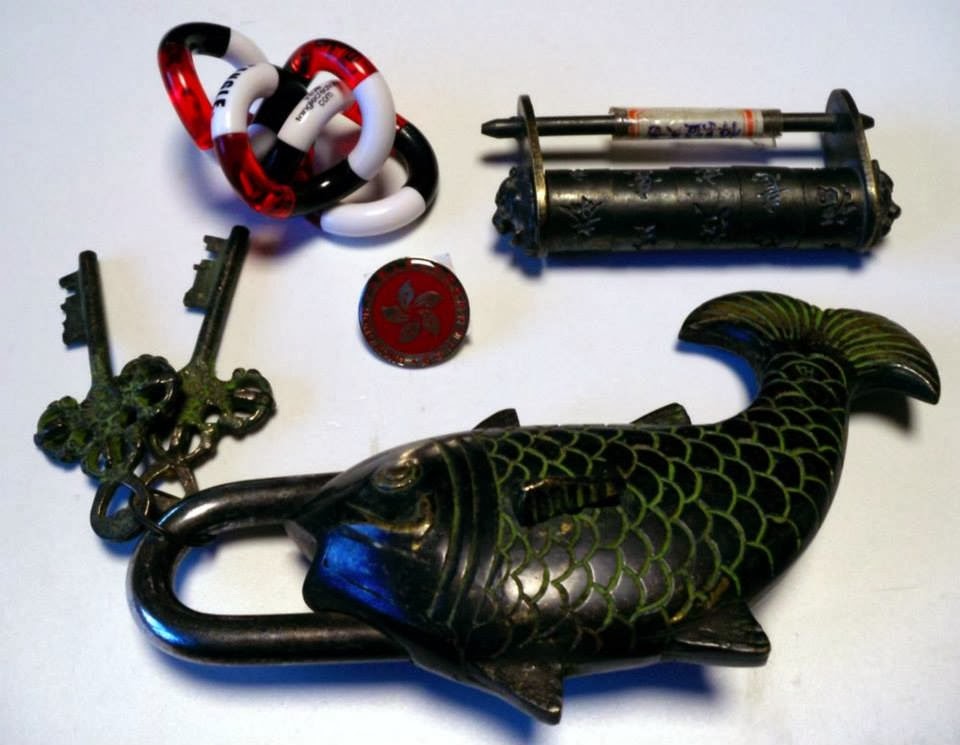 From there Hendrik and I headed out for Shum Shui Po so he could look for a last few puzzles.  I think he was disapointed when he couldn't find any trick locks the night before and I know a place that sells some 'tricky' locks.  Not too difficult, but interesting all the same.   I took him foraging through old greasy and rusty bins to find what we were looking for.  Told a few sales people they were crazy, and in the end bought a fish lock for him. We turned a corner and he found a chinese word combination lock, bigger than we saw the night before for a lower cost. Most of these were 3 or 4 dials.  The one he got in the end was 5!  Lucky sod!  Mine is only 4.  Again, my calling the seller crazy helped bring the price down.  All in all it was a good day for him.

We headed back to the fair to pick up his suitcase full of toys then went off for a quick bite to eat before I said goodbye at the airport.  As always, It's hard to see friends leave, but this one I know I will see again in the future.  Expect a hug and kiss at IPP!  I've shared a drink with you now and am allowed my tic.

Posted by Roxanne Miller at 9:37 PM