Today’s puzzle is again brought to you by Smart Games.  It was made by Raf Peters. This one is a magnetic puzzle game with only 48 challenges.  The game is again for only 1 person.  This one is set for younger players starting from age 4. 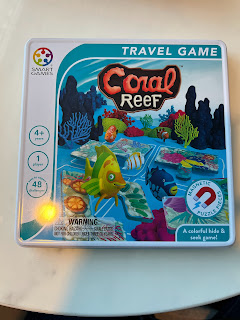 We bought this one in Maui Hawaii at a toy store on the main strip. We went in looking for something local and came out with something fishy.  As it turned out, this shop was very good for us in terms of puzzles.  We were able to pick up quite a few puzzles I had been looking for. They were higher priced than I expected to pay, but beggars can’t be choosers.  We had initially planned to purchase many of these when we hit Asia but that was not meant to be. 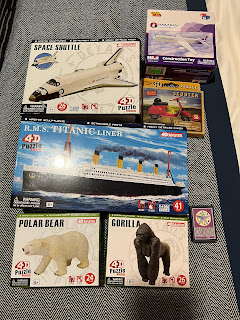 The object of each puzzle is to put the 4 coral pieces on the game board so the sea creatures are covered except for the animals in the challenge.  There is only one solution per challenge as usual.  With this one, there are also 4 different levels with 12 challenges per level.  Each challenge only gives you one photo of the animals that are to remain uncovered.  The four pieces are each a different shape and have magnets attached to the back so the puzzle is self contained. 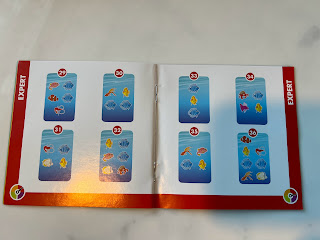 I can’t help but think that this is a new take on an old version of a puzzle made by Smart Games back in the early 2000’s.  At that time there were a large number of "hide the" games that were made.  If I were at home, I could check the books, but I’m fairly certain I’m not wrong on this one.

Since we are on sea days, I decided to sit down and finish all 48 puzzles in one afternoon.  But before I did that, I gave George the challenge of putting this through burr tools as well.  I watched him sit and stare at the game board for the better part of an hour.  I know his wheels were spinning trying to work out how to solve this puzzle.  Note: 3 hours later he had completely programmed in all 48 puzzles.  I can’t wait to see how this one works.  The burr tools solution can be found here.  He found a total of 3072 solutions.  I'm sure you will see his thoughts on this puzzle in a future CFF. 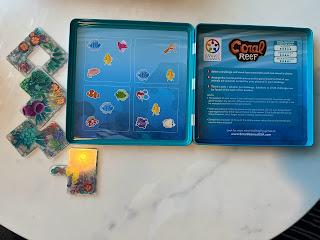 On that sea day afternoon on which I decided to play with this game.  I discovered that there really is no difference in the difficulty level as I moved through the puzzles.  I solved all 48 in the box within about 2 hours.  The earlier puzzles took no more than 1 minute each, some of the more difficult ones took around 3 minutes.  All in all though, it was an enjoyable way to spend the afternoon.  I would gladly give this box of puzzles to a new puzzler, or a child.

One thing I really like about this puzzle is the fully enclosed metal tin. The other magnetic puzzles we own that were produced by this company are all in a snap close book.  This is not ideal as the pieces easily fall out and can be lost.  I hope that in future Smart Games keeps this format.

Until next week, Happy Puzzling.