For the past two days we have been in Honolulu, Hawai’i.  This stop we decided to forgo all tours and attractions and meet with George’s university friend Carl and his wife Marilyn.  We were able to disembark around 9 and scooted a whole mile to their home.  It’s a bumpy ride, and the road they live on is one way going in the wrong direction, but we weren’t bothered by it, we just hopped on the sidewalk and took off.  Later to learn that scooters are not allowed on the sidewalk, but try telling that to the men at the pier.  They insisted that we use the sidewalk. 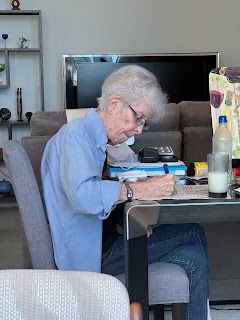 The first part of the day we opened up the packages that we had sent on to Carl’s and were pleased to see that everything except the motion sickness tablets arrived.  I guess someone is wanting me to go to the infirmary to get them and to get swabbed again on this trip.  Oh well.  I’m sure It will all work out.  I did a very large packing puzzle.  We had 12 rolls of filament, 3 4-pound juggling balls, two pillows, a couple of books, a pound of ginger chews…the list goes on.  I filled two backpacks, and had to return the next day for the rest. We gifted Carl a 10x10 Hexacubes puzzle that George printed on his SLS machine. This was a long overdue puzzle.  Carl had gifted George the same one made of wood over 50 years ago and George promised to make him one as well.  Better late than never. 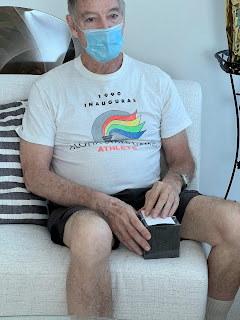 After talking for a while, we had a very nice salad for lunch.  One nice touch was the avocado.  Carl told me he was able to pick them up on his hikes. In fact, he told me of many hikes that he has done where the fruit is plentiful and for the picking.  We had a lovely bottle of wine, I believe it was from Oregon.

They had a few more hours of talking, and I went to Ross to pick up a few pairs of shorts.  I only packed dress shorts, and realized these would not work well for the hiking and other adventures we have in store for the rest of the journey.

When I returned, we went to an escape room.  Well, two escape rooms really.  The first was an Indiana Jones type room.  The object was to find and remove the bust of Nefertiti.  This was just a beginning teaser.  Carl had only been to an escape room once, so it was really to get him used to what the room was about.  We had a few hiccups, but were able to finish the room with around 5 minutes left.  No hints were given, so that was a plus.  We did need help with an alignment issue on some canonic jars.  We had the correct order and orientation, but they were rather finicky with the exact alignment.    We went out and took the obligatory finisher photos. 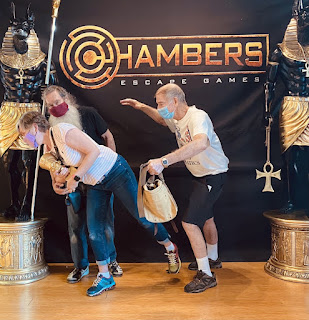 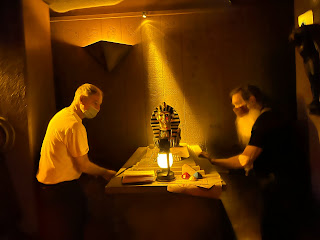 After a 15 minute wait, we then entered a VR escape room.  This one was so COOL!  I’ve done VR activities before, but never an escape room. It was a first for all of us.  In the first part of the room we were inside a spaceship and needed to work out how to open the hatch to get outside to complete a repair on a laser.  This took some doing, we managed to complete the first 3 tasks rather quickly, but got stuck on the final one.  We all seemed to forget that light travels….I will say no more in the event that one of my readers might do this room.  Suffice it to say, we opened the hatch and ended up outside to complete the mission.  We worked out what needed to be done rather quickly, batteries, etc.  (Vague enough?) Accomplishing it was another issue all together.  In the background, I can hear the countdown timer slowly eating time.  (For this room, we had 1 hour to save the earth from a giant meteor.)  When we eventually worked out what to do, Carl had one job, George had another, and I was in charge of safeguarding the mission by sacrificing myself to the meteor shower so they could do the repairs (Still vague enough?)  We managed to complete the mission with 3:48 left on the clock. Not bad for 3 old folks.  Later when we were talking to the young lad who was running the session, we discovered that the bright lights that were flashing at us were not a part of the room, but rather an indicator that the battery life on the equipment was running out.  This made it all the more impressive that we managed to finish.  (At least in our minds). 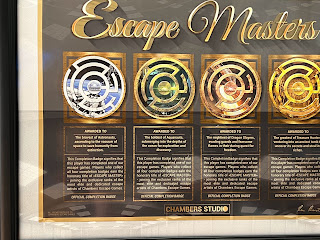 We were given a sticker and a magnet and told if we collected all 4 magnets we could then enter 3 more "advanced" rooms.  What a great marketing tool!  You can’t do the ones you want until you finish the first 4.  Bravo!  What a well thought out plan.

We returned to the apartment where we had a very nice meal of salmon and rice accompanied by a nice Pinot Noir. Carl loves wine and has over 800 bottles in coolers in his home.  I shall have to look into these but where would I put them? 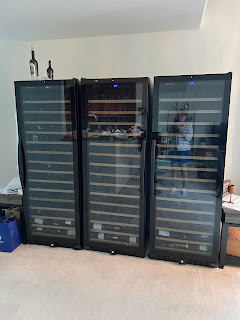 We scooted back to the ship once we finished, or at least we tried to. The scooters have headlights and tail lights, and we were confident we could be seen. The only problem we had?  Just after a few blocks, my batteries went dead.  I hadn’t realized that I was low when we left in the morning and well, we kick scooted back to the ship.  Lesson learned.  Make sure there is a full battery when leaving the ship.

After a very good nights sleep, we woke again and returned to Carl’s.  This time it was to go on a hike.  We drove to the sight which was a few miles away from their apartment, found a place to park and walked around 2 miles to the top of a hill on the Makapu’u lighthouse trail..  Just below the lookout was a lighthouse.  On the way back, we managed to see three whales breaching the water.  It was a nice walk, and I discovered that I was using muscles that I had not used in a very long time.  We had planned to have another hike into a crater, but George and I were starving so we decided to forgo that part of the day.  We never eat breakfast, so by the time we had returned to the car, we had both had enough.  Our stomachs were telling us it was time to call it a day. 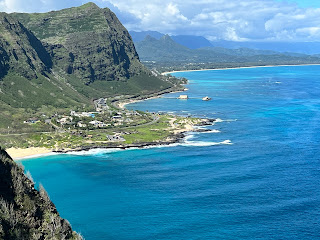 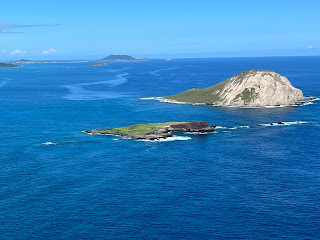 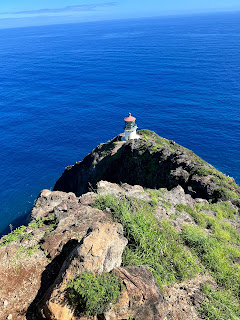 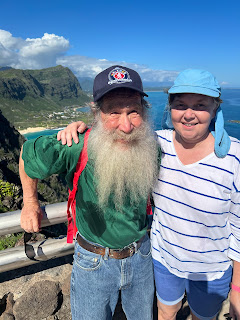 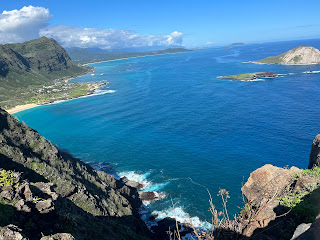 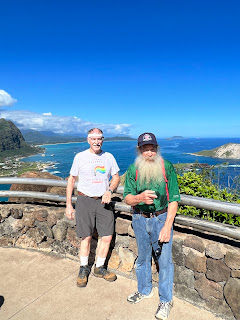 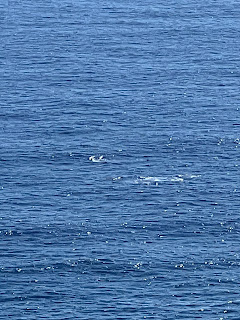 We got some Korean takeout and returned to the apartment to eat.  It was a very nice meal.  For the price, you can’t go wrong.  There was so much food, George and I decided to put what we would eat on a plate, and leave the rest for the two of them to have for lunch tomorrow.

After lunch, George and Carl went into another room for a lesson in burr tools and a bit of puzzle talk.  Marilyn and I had a nice discussion about family, and living in cold climes during our youth.  We both were in agreement that living where we do now is much better. 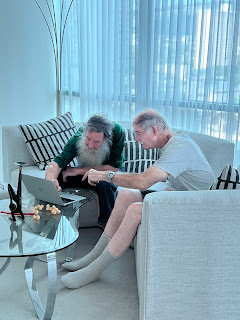 At 6 we had a dinner reservation at a Lao-Thai restaurant that Carl chose for us and therefore we had to give up on the burr tools lesson and head off to eat.  OMG!  That was hot food.  I ordered most of the dishes at medium heat, and it almost blew my head off. They asked if we wanted it mild (1/4 spoon pepper), medium (1/2 spoon), hot (full spoon), Thai hot (2 spoons), Lao hot (3 spoons!)  I ordered the Tom Yum Gong hot.  I managed to drink down about 1/2 of the pot, but couldn't manage any more.

I have a few observations about Hawai’i.  When we first got to the main road heading to our friends home, we were bombarded with the beautiful smell of frangipani flowers.  I loved the smell in Hong Kong, I love the smell when our tree is in bloom in Boca, and I most definitely love the smell here.  It is so fresh and clean, not overpowering, but all around you.

My second thought is the homeless problem. In Boca everyone asks me about the homeless problem that we saw in California.  It has nothing on what we saw here.  There are tent cities all over the area.  It was explained to us that the government allows people to live in the tents for a while, then they are moved to another area.  It is truly a sad sight for us to see.

George had Hawaii on his list of places to live once I retired.  I know I’ll be good here, but I’m glad we chose Florida.  You see, I really didn’t like what I saw in Hawaii. The houses are all stacked on top of each other. The views while nice, from where we were located, it was the same views I had in Hong Kong.  Mountains on one side, ocean on the other.  So this was something that didn’t appeal to me. The weather is nice, but it seems to be a rather constant, and while I don’t like the cold, I do like a bit of variety.

One thing that has impressed me greatly is the safety procedures the state has in place.  We have had our temperatures taken, and have had to show photo ID and COVID vaccine cards to get into most places.  I greatly appreciate the stance taken. It seems this state is serious about safeguarding their citizens as much as they can.

Tomorrow we go to Maui.  Until then I hope you enjoyed the read

Posted by Roxanne Miller at 9:51 PM

Email ThisBlogThis!Share to TwitterShare to FacebookShare to Pinterest
Labels: Around the World Cruise, Carl, Honolulu