And now back to our regularly scheduled program.

IQ Digits is a new puzzle game from Smart Games.  It has 120 challenges designed by Alain Brobecker and Studio Smart.  If first hit the market in 2019 although I hadn’t seen it before this past week. 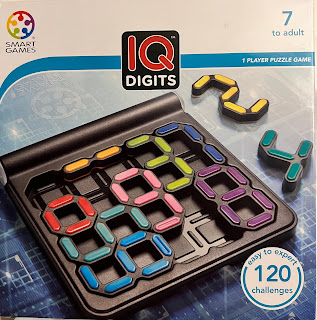 The game is similar to the Digigrams puzzle designed by Martin Watson. It was initially exchanged at IPP20. I can't help but feel that the Smart Games version is a bit too close to be an original design.

This one is a standard single player difficulty increasing puzzle game put out by Smart Games.  One difference though is that they give you clues as to how to place the missing pieces.  As an example, in the photo shown below you can see in puzzle number 73 the number 14 inside a box.  This tells us that there are 3 pieces that converge in that corner.  One of which uses 2 sides.  Given the shape of the numbers, that one has to be a 7.  Ok.  I won’t bother you with the logic behind the puzzles.  I’ll let you work them out on your own. 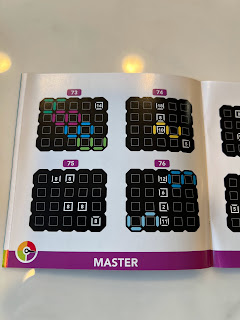 Each game is laid out in order of difficulty from starter to master with junior and expert in the middle. I sat down and went through the first puzzle of each level.  To be honest, they aren’t that difficult.  I guess over time I’ve just worked out how to do these types of puzzles. 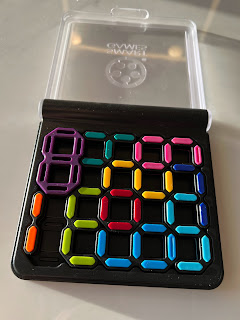 The original puzzle also allowed for flipping the pieces over while the Smart Game's does not.  Each piece has a specific side as seen by the grooves in the puzzle base, as well as in the pieces themselves.
George came up after me and did the same thing.  Only guess what?  He didn’t solve them correctly.  He hadn’t realized that he needed to use the tiny number hints to solve the puzzles.  To be fair though, it is very tiny print in the instructions that tell us this. 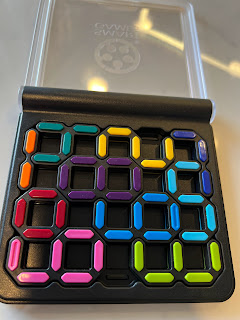 We bought this puzzle in San Diego at a toy store called Geppetto’s located at the Seaport Village. It cost $17.99 there.  On Amazon it is only $14.99.  I would recommend this one for new puzzlers. It gives you a chance to work your way up to a more difficult puzzle.  At the whopping price of 14 cents per puzzle, you can’t go wrong.

As is his usual, George wrote a burr tools puzzle to help solve this one.  His solver though does not add in the extra hints. It's just a straight up solver in which you can place the first few pieces and have the computer do the rest.  It can be found here. I'm sure he will have a CFF article about it in the future.

Until next week, Happy Puzzling.

Posted by Roxanne Miller at 8:32 AM