Today we sailed into Nuku Hiva Marquesas.  This is billed as being the most remote place on earth.  We anchored in Taioha'e bay.  The town here is located at the edge of a volcanic crater which has since fallen into the ocean. This is a relatively large island with very few people. If wikipedia is to be believed, there are less than 3,200 people here!  Still more than eight times the population of the town I grew up in.   Given the size of the island, you could probably go for days without seeing another person if you wanted to.

In advance of coming here, I did a little bit of internet searching to see what there is here to do. My searching ended up with some hikes, horseback riding, and a tiki to hunt down.  When we came into the bay, George and I headed up to the deck with a pair of binoculars to scope out the roads.  We were told at the destinations counter that we probably wouldn’t be able to scoot around because of lack of roads.  When we looked, we saw some roads, but decided that the 'town' was so small that we could very easily do it on foot, and besides, after 4 days at sea I wanted a bit of a walk.

While overlooking the tender operation from the tenth deck, I happened to see a sting ray in the water.  I thought it looked to be about 6’ across, but was later told from our height it was probably more like 12. I wish I could have gotten a better photo of it. It was truly a spectacular creature.  It was not bothered at all by the ship being in its waters. I wish my photo was better than just the shadow you see here. 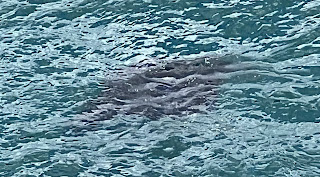 When we pulled into the port, we saw another ship here.  This one is a local Tahitian cargo/cruise ship.  It holds a maximum of 230 passengers and just travels between the islands. 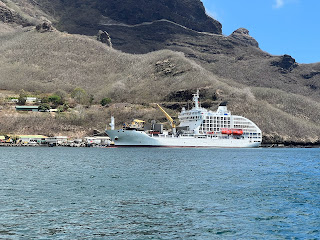 When the tender docked, we were met by a local 'band' and a few ladies handing out flowers.  I don’t know the name of them, but they are often sold in small bags in Hong Kong to place in cars as air fresheners.  The men were all in costume and the music was nice.  We listened for a while and set off in search of that tiki. 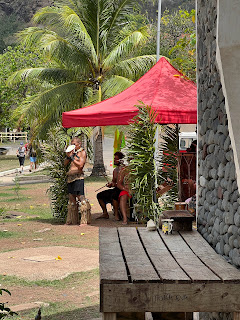 We headed off up the hill where we found the entrance to the Tiki I wanted to see.  It was a gentle stroll to the top.  Along the way we were greeted by many others as well. Tiki Tuhiva was built in 2016 for tourists. Wow!  It stands around 12 meters high. I don’t know the back story of this so I’ll just tell you what I saw.  From the front it is a fertility goddess, from the left side it is an alien from outer space, and from the rear it is an elephant with a man kicking its leg. As many of my friends will never come here, I will post a few photos of the sculpture.  Note the conch shell.  The other couple we were there with enjoyed it as much as we did. 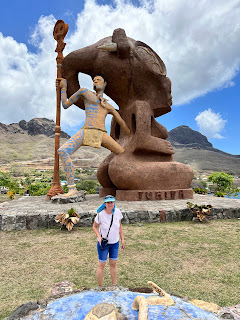 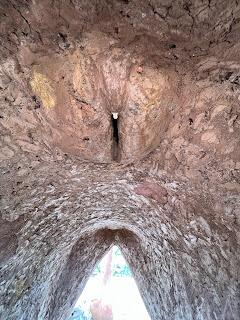 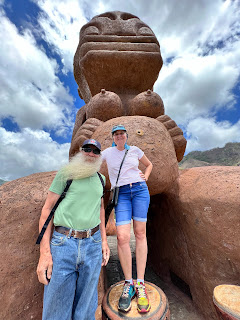 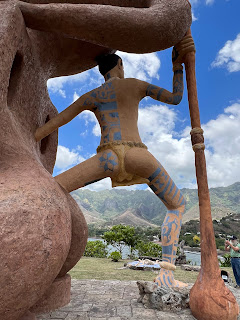 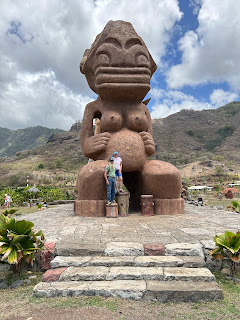 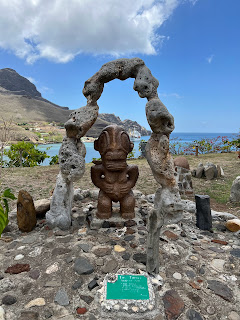 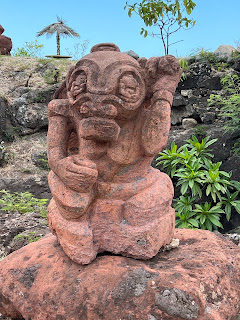 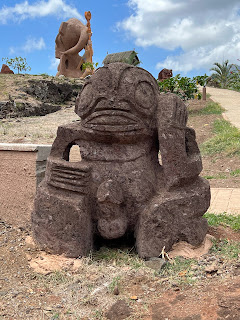 We next found a spot to sit and call our bank.  On a sea day George’s card was used to connect to a Samsung Pay account. Thankfully our bank new that we were in Hawaii just prior and put a block on the transactions.  This one was added to an account out of LA.  I wonder if it got hijacked when we were shipping there.  No harm done, we just need to swing by the LA branch and get a new card when we get there in February.  Sorry Marti, we need a slight detour before we can buy lunch.

After we wandered around for a while and took a live video for the folks back home, we decided to head up the roadway to see what was there.  We walked on for a few miles before we came to a construction zone. It was literally the end of the road for us so we decided to turn around and walk back. The road we were on was very busy.  There was no sidewalk so George kept pulling me into the ditch whenever a car would pass. I was busy looking around at the scenery.

I was fascinated by the fruit trees that we saw.  Mangos, breadfruit, grapefruit, bananas, pomelos.  I’m sure there are many I missed.  They were just growing everywhere.  I wish I could get my fruit trees to bear as much as some of these did.  Give them time I guess and I’m sure they will. 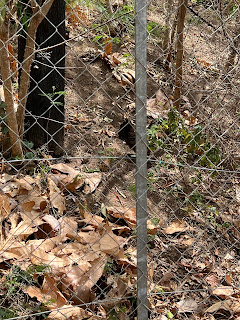 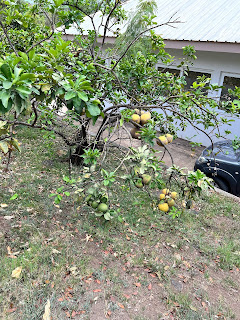 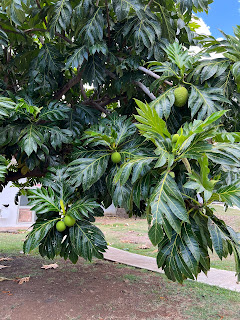 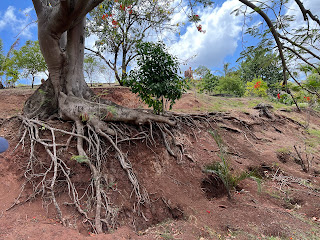 We wandered past a tourist shop but found no puzzles inside-as expected.  We then decided to try and go for a swim at a white sand beach that we saw from the large tiki. We were unable to find a way down there so we then opted to go to the brown sandy beach instead.  Turns out it is a boat dock.  I decided to pass and we headed back to the ship.

We ordered room service and had sandwiches and some of the beer that George bought in Hawaii.  It was a lovely way to spend the afternoon.  We sat on the veranda overlooking the bay.  Mother Nature is a wonderful thing isn’t she?  The island is not the lush green I was expecting, but rather a greyish brown.  The trees and plants seem to just find a spot and start growing.  It's truly a marvel.

I watched the clouds fall on the rocky island and marveled at the beauty of it.  While we sat here we watched a few sail boats and a couple of skips go by.  The only sounds around are the crashing of the waves and the bleating of goats.  I wondered as we were walking around what the animals were on the island. We found lots of evidence that one had been around.  Goats never crossed our minds. 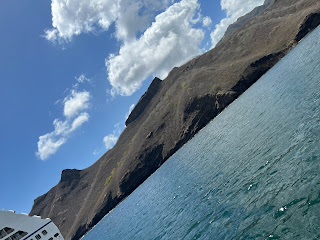 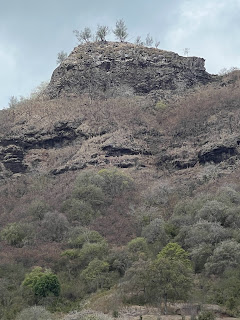 For the rest of the afternoon, I have just sat on the veranda overlooking the ocean  it sure is blue and vast.  I could get used to this sort of life. 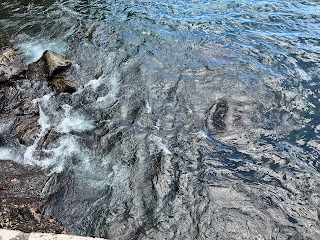 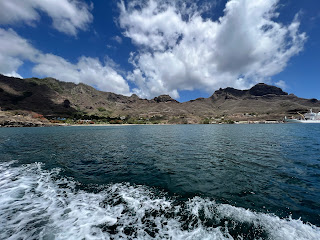 Tomorrow is a sea day. I think I will refrain from writing about it. I know you are not interested in my trials of finding diving boats for the remainder of our time in French Polynesia.  Wish me luck all, we are looking forward to a weeks worth of dives.  I was unwilling to book anything earlier because of the uncertainty of even getting here. Now I am simply trying to convince these places that one dive a day is enough for us.  Most are telling me the maximum is three per day.  We also have the added problem of George being an Advanced diver and my being brand new to the sport.  I’m sure it will all work itself out in the end.  Hopefully I can give a report on the undersea world of the islands in my next postings.

Until then, happy puzzling and fair winds.

While I was sitting typing up this blog post, I was overlooking the ocean.  I happened to glance up and see a rather large fish coming towards the boat.  I jumped up and grabbed my phone to see if I could snap a photo.  This time I was able to take a few very nice shots.  Once again a sting ray came out to say hello. A short while later another came out, slapped it's wing against the sea and there were two rays waving goodbye to us.  What a wonderful way to leave this island. 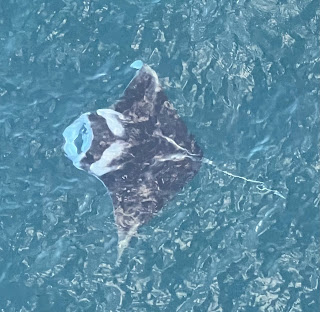 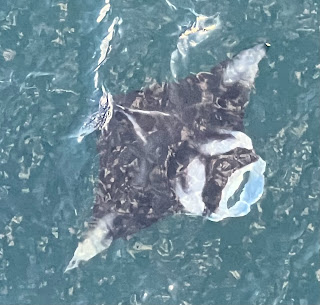