Back at work and a miserable homecoming

Well the title says it all. I'm working full speed ahead yet again and had a rotten homecoming.

Guess who stepped on something sharp and slimy at her work retreat and then needed to get a tetanus booster again. But hey, would I let that stop me? Nope. Not even the nasty flu bug I've picked up will slow me down. I've managed to cough my way through 79 of the 80 exchange puzzles! You can find them all now on my YouTube channel: https://www.youtube.com/user/katsmom150901?feature=mhee .

And now begins the even longer task of photographing each puzzle before find a final resting place for it. After that the real fun begins...playing!

So what am I working on right now? A couple of bolts. Nothing too hard. (so she says) These are made by Rocky Chiaro. I've lusted over his puzzles for as long as I can remember following Rob's page. I'm sitting here feeling rather foolish because I only bought two of his wonderful puzzles. I should have gotten the rest of the bolts and the keys that have grabbed onto my desire strings. Of well maybe in the future. Or maybe I should just send an email asking to place an order.

I already have a puzzle by him that was redone by bits and pieces do when I saw he was at the puzzle party I made a quick check of my finances and bought two bolts. These are really great not because of the opening (that's pretty easy I managed both in under two minutes) but in the fact that he has made each one by hand. No CNC machines here. And if that isn't impressive nothing is. If you get the chance to purchase one it's money we'll spent. 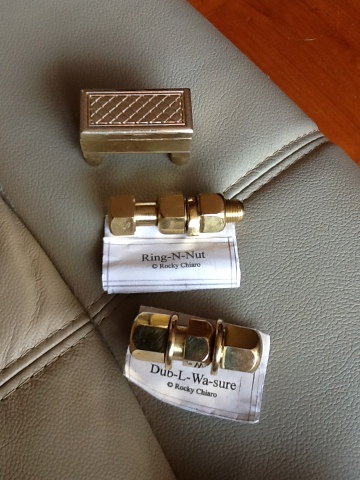 Posted by Roxanne Miller at 6:06 PM